Art can be a refuge. It can recall lost beauty and peace, process a journey through time and around the world, guide recovery from fear and oppression. It can touch pain without reliving it. That's true for Bundoora-based couple Aisa and Behzad Hadziahmetovic. When their home in Sanski Most – by the banks of the Sana River in north-west Bosnia and Herzegovina – was ransacked and a drunken Serbian extremist made a death threat against their infant son Mirza, the Bosnian Muslims knew they had to flee their shattered hometown during the Bosnian War of 1992-95. 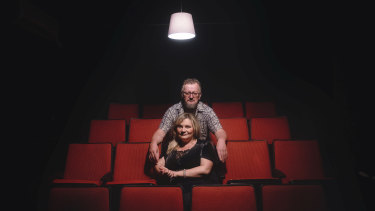 Leaving with what little they could carry, Aisa strapped Mirza to her torso while Behzad grappled with what he could of their belongings. "We were just waiting for when it was our turn to be or executed or imprisoned," she says of the ethnic cleansing that left thousands of their compatriots buried in mass graves. "I have so much empathy for everyone who lost someone. My uncle was killed almost on the last day of the war."

From a Croatian refugee camp they made it to Austria, where Behzad took up painting to soothe his nerves. Having lost so much and dislocated from home, his oil and pastel renditions of centuries-old Bosnian cities were a lifeline connecting him to a more peaceful past and hope for the future of his country. "It pulled you out of your fear," Behzad says. "When you draw, you're with yourself, quiet and calm. You don't think so much about what's happening back there. It was a kind of therapy."

His beautiful architectural visions will be on display at the inaugural Refuge Festival. Held at Fitzroy North art space the Motley Bauhaus, it will host multi-disciplinary work by creatives with a lived experience of being a refugee or asylum seekers. Theatre, films and live music will be accompanied by talks and workshops, with food from the nearby Moroccan Soup Bar.

The couple arrived in Australia in May 1994 after a relative, who had recently moved here, suggested they apply for asylum. It was a vital part of their recovery. "Fitzroy is a part of us," Behzad says. "We'd love to walk around this neighbourhood when we first arrived, travelling by tram from [our home in] Preston."

The suburb's leafy streets and multicultural mix were a far cry from the trauma of fleeing Sanski Most. Aisa recalls her terror while they were marched through a dark forest crowded with angry soldiers. "I could not think about setting foot in a forest for at least a year," she says.

Second son Harun was born in Melbourne. They returned to Bosnia in 1997. "We were young, scared and alone, dislocated without family," Behzad says. Aisa adds, "The pain of the war is a part of our lives, a hidden experience that is always there. When we went back to Bosnia, we were full of enthusiasm and optimism."

Aisa became a high school Bosnian literature and language teacher and went on to publish poetry, essays and a play, What Colour is Love?. Her writing draws on their harrowing experiences, but also the proud identity that fuels their art. She will perform excerpts of her work in both English and the original Bosnian at the Refuge Festival.

Behzad's artistic career flourished, with his work appearing in the collection of the American Embassy in Sarajevo. The peace it provided helped him process further trauma – the PTSD he encountered while working as a translator for the UN during the exhumation of mass graves.

Though they stayed in Bosnia for almost two decades, building a new home from scratch, Aisa says things were never the same again. "Each segment of life was destroyed."

They came back to Australia to provide more opportunity for their now-adult sons Mirza, 28, and Harun, 24. And they are thrilled to share their art and stories  at the Refuge Festival.

"I deeply believe that art can change the world," Aisa says. "We survived, and life is most important."