Tens of thousands more Victorians will be allowed to get their first Pfizer vaccine dose in the coming months thanks to a shift in state policy, as Victoria surpassed the milestone of one million fully vaccinated residents.

Health minister Martin Foley on Saturday announced the gap between the first and second doses of Pfizer vaccine would be stretched from three to six weeks at state clinics, allowing “many tens of thousands” more people to become at least partially protected against COVID-19. 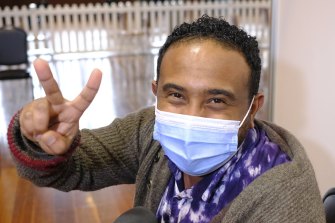 Abiy Gebeyehu got vaccinated in Carlton on Saturday, the day Victoria was confirmed to have passed one million fully vaccinated residents.Credit:Luis Enrique ascui

Late on Saturday, Victoria declared parts of South-East Queensland a red zone, as parts of the Sunshine State entered a snap lockdown after six local cases with the Delta variant were recorded.

It means anyone entering Victoria after 8pm on Saturday night from a red zone need a permit requiring them to get tested and quarantine for 14 days. Those who entered Victoria before 8pm on Saturday must get tested within 72 hours and stay isolated until a negative result is received.

Victoria recorded two new COVID cases on Saturday, both close contacts of the testing site traffic controller found positive earlier this week. A Woolworths supermarket in Doncaster was listed as an exposure site because one of the cases, a colleague of the traffic controller, attended before he was asked to self-isolate.

Chief Health Officer Brett Sutton said the cases were “not something to panic about or to be overly anxious about”.

The new six-week wait between Pfizer doses is still within the time frame recommended by the Australian Technical Advisory Group on Immunisation. Victorians who already have their second shot booked for the three-week interval will not be affected.

It is another shift in vaccine policy Professor Sutton said was required to counter the growing risk of lockdowns due to the Delta variant, highlighted by Queensland entering a snap three-day lockdown and NSW’s 210 new cases on Saturday. 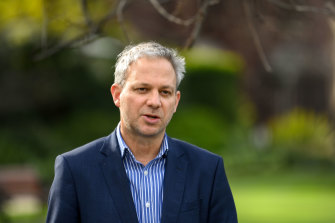 “We’ve monitored the epidemiological situation in Australia right through. It’s clearly turning. There’s a substantial risk coming from New South Wales; Queensland are facing exactly that threat,” he said, adding the scheduled boost in Pfizer supply in September gave him more confidence to make the change in the meantime.

The shift replicates an approach used in Canada with Pfizer and the United Kingdom primarily with the AstraZeneca vaccine to “front load” on first doses, which for Pfizer are between 50 and 90 per cent effective in preventing infection according to early research.

The figure of one million fully vaccinated Victorians, confirmed in federal data on Saturday, represents about 19 per cent of the state’s adult population. The milestone was slated to occur months earlier under the federal government’s initial targets. 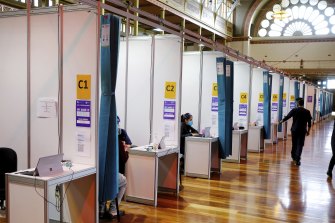 “I’m really lucky to have my second jab,” he said.

“Now I feel like I’m fully protected from this virus … it really makes me feel special being part of this big milestone.

About 40 per cent of Victoria’s adult population have received at least one dose, just over half the target of 70 per cent full vaccination revealed by Prime Minister Scott Morrison on Friday for states and territories to move into “phase b” of the country’s recovery plan.

Victoria, along with Tasmania and the Northern Territory, will lead a national cabinet subgroup that will present suggestions on what freedoms vaccinated Australians will be allowed to enjoy regardless of possible lockdowns in phase b.

Professor Sutton suggested greater opportunities to travel and attend events were possible but the issue “needs to be worked through”.

Nancy Baxter, head of Melbourne University’s School of Population and Global Health, suggested greater freedoms could stretch from unrestricted domestic travel to being allowed to attend venues such as the cinema.

She warned, however, that it would likely not be a one-size-fits-all approach and freedoms would depend on variants and the number of cases at the time.

“In a place with low COVID numbers you may be able to relax some restrictions. If you look at Sydney at the moment, there is still a risk that fully vaccinated people can get the Delta strain and pass it on, which is not something you want to encourage.”