Rapper Briggs as Sensei leads the chant, “What do we want?” and his students respond in unison: restitution, land back and equality. Most powerful and shocking is their final demand: no more cops killing our mob. 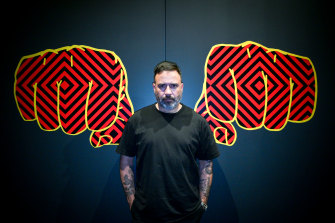 It’s an image from artist Reko Rennie’s latest film, What Do We Want?, named after the traditional protest chant and opening at ACMI on Friday. The timing of the release is particularly powerful after the acquittal of police on trial for shooting Aboriginal teenager Kumanjayi Walker.

Crucial to the film’s impact is the soundtrack by Adam Briggs, who is Yorta Yorta, and Daniel Rankine (aka Trials), a Ngarrindjeri man – who together make up hip-hop band A.B. Original. The three-channel work has influences from martial arts to the Blaxploitation films of the 1970s, both of which Rennie grew up with, and was commissioned by Artbank, which provided $70,000 to make the work.

At first glance, the film shows a regular martial arts class but closer attention reveals the students are Aboriginal, young and old, male and female; their karate uniforms are adorned with an OA insignia sewn in gold, initials standing for Original Aboriginal.

The cast includes Rennie and his daughter and includes friends, colleagues and actors, “all these different language groups represented”. 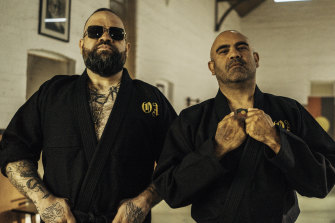 Briggs (left) with actor Caine Muir in Reko Rennie’s film, What Do We Want?Credit:Ellery Ryan

As well as making a powerful statement about the injustices suffered by Aboriginal people, the film is a cry for action, something Rennie says is sadly lacking from our federal government.

His outrage and frustration is clear in the work, the product of decades of abuse and inaction on many basic fronts. “Land, justice, law, education, health, equality and land back; it’s crazy today there’s all this Crown land that still has not been returned to communities,” Rennie says. “We’ve got mining organisations earning billions off Aboriginal land and communities see such a pissy little amount, and that’s meant to make everyone feel OK. Well, it’s not OK.”

Different parts of the film reference the Black Power movement. At one point, the students stand, right arms raised, with fists in the air, mirroring the Black Power salute. It’s a reminder of the American civil rights movement as well as the stark differences between black rights here and there. We have such a long way to go, says Rennie.

Martial arts have been part of the journalist-turned-artist’s life for years – he studied jujitsu as a form of self-defence, an important skill growing up in Melbourne’s west. It also instilled a level of discipline the 47-year-old Kamilaroi artist has found useful in trying to crack into the commercial art scene.

The demands stated in the film have been made for decades by Indigenous people in Australia, often falling on deaf ears. “I thought about notions of protest and how our people continually are having to share their voices through alternative means such as protesting, creating work whether it’s music or the arts, academia,” Rennie says.

The Artbank commission is designed to allow Australian artists and filmmakers to make new, ambitious and experimental screen-based work. Applications for the next round of Artbank x ACMI works open on Friday.

Rennie’s work will appear on different screens this month, millions of TV screens around the world when it is showcased at the Formula One Grand Prix this month around the track and at sites across Melbourne. Commissioned by Heineken, he has created work about the Birrarung, or Yarra River, using his trademark geometric designs and fluoro colours.

Reko Rennie: What Do We Want? is at ACMI until May 1.