Facebook’s Europe Vice President Nicola Mendelsohn, 49, says she thinks about her incurable blood cancer ‘every day’ but her family don’t talk about it a lot because there’s ‘no new news’

Nicola Mendelsohn has revealed that she thinks about her incurable blood cancer ‘every day’ but says she doesn’t talk about it a lot with her family because there’s ‘no new news.’

Facebook’s Vice President for Europe, the Middle East and Africa, 49, who lives in North London with her family, said that the cancer isn’t something she discusses often with her four children Gabi, 24, Danny, 22, Sam, 19, and Zac, 16.

The advertising executive from Manchester was diagnosed with the incurable blood cancer Follicular lymphoma in 2016, and even though she is technically in remission, she explained her cancer could come back at any moment and there’s no certainty it would never come back.

‘As a family we don’t talk about it a lot because there’s no new news. One of my kids told me they take their cues from me. If I’m all right, they’re all right too,’ she wrote in the Sunday Times Magazine. 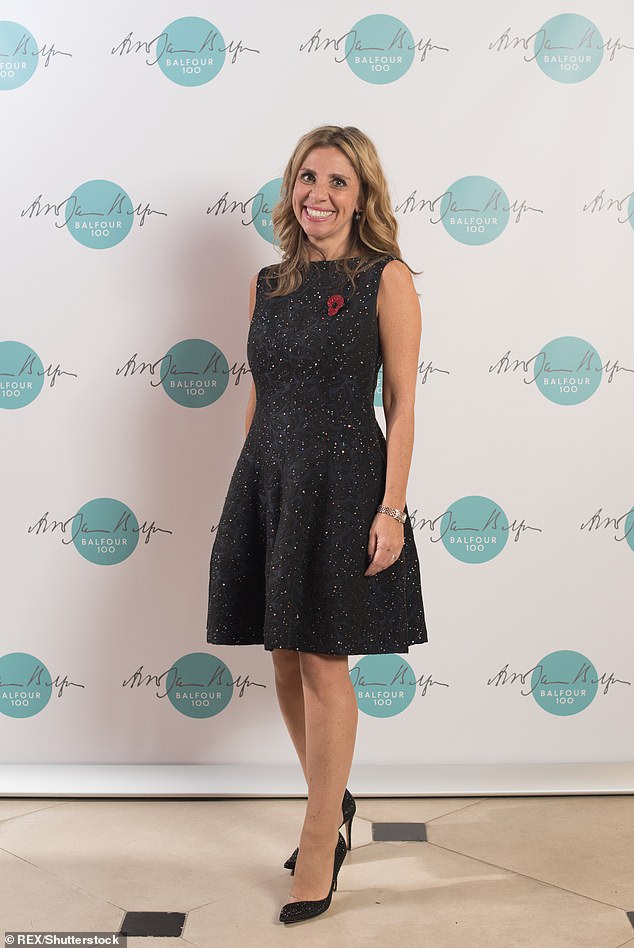 Facebook’s Vice President for Europe, the Middle East and Africa, Nicola Mendelsohn, 49, who lives in North London with her family, said in the Sunday Times Magazine that they didn’t discuss her cancer often, even though she thought about it everyday (pictured in London in 2017)

Nicola, who had treatment for her cancer two years ago and revealed the Covid-19 vaccine had not worked on her due to her condition, said she was thankful it had been a success.

‘But the unusual thing about this cancer is that, even though I’m technically in remission, it’s still there on a microscopic level,’ she explained.

The executive, who created the Follicular Lymphoma Foundation in 2018, which is dedicated to helping people with the disease to live well and get well, said her work with the charity is important to her – adding she hopes she can help find a cure so her foundation doesn’t need to exist.

The mother-of-four went on to say how making the decision to keep working despite her condition had been an easy one, and that she could never have imagined not working. 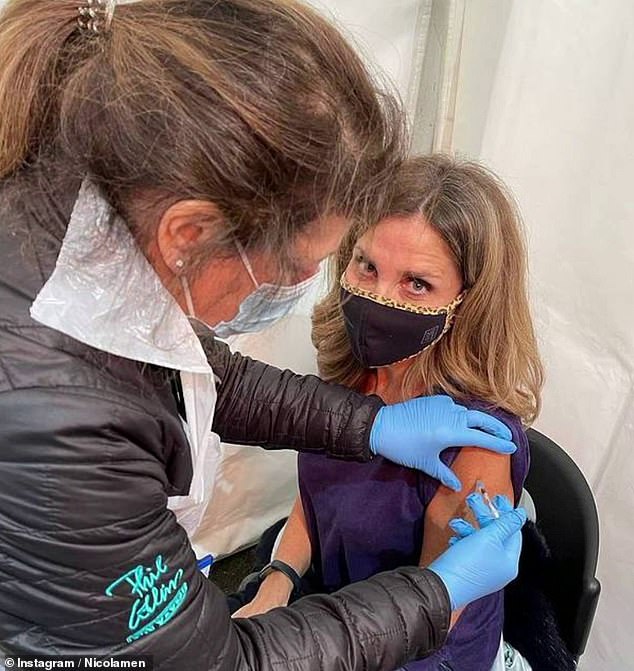 Nicola revealed in May that her Covid-19 vaccine hadn’t worked on her due to her blood cancer, meaning she is not protected against the virus

‘It wasn’t a hard decision to continue working – I couldn’t have imagined stopping. It’s a funny thing how your work and life come together in different ways,’ she added.

Nicola explained that on Facebook there’s a Follicular Lymphone support group which has nearly 8,000 people – adding that she spends some time on the group ‘most days.’

Talking about her everyday life, the executive revealed she wakes up everyday at 7am, doesn’t drink coffee or tea, and is at work by 8:30am.

She said that due to the coronavirus pandemic, her family sit down for a meal every evening, which they had tended not to do in past, with the exception of their weekly Friday Sabbath dinner. 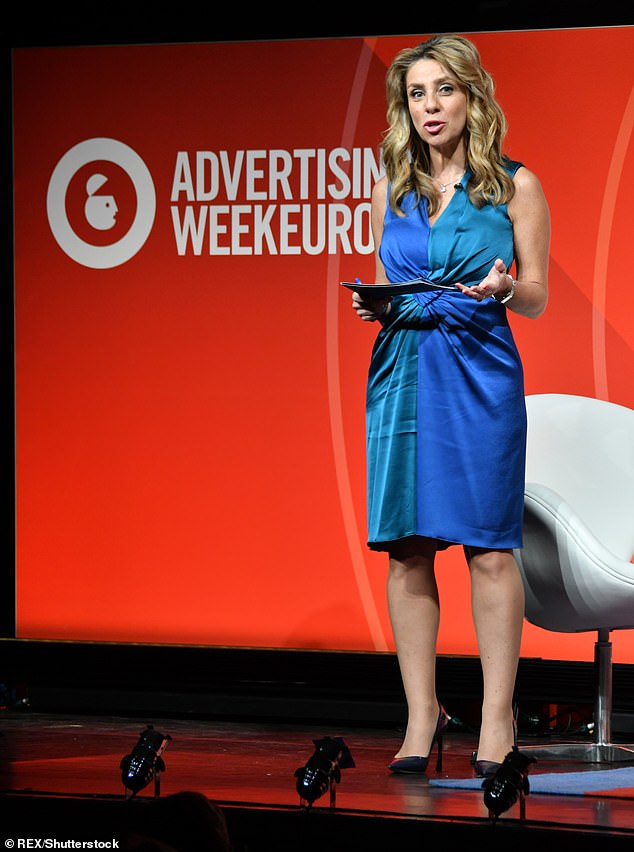 British advertising executive Nicola Mendelsohn, pictured in 2017, revealed that treatment for incurable blood cancer was stopped because of the coronavirus crisis

In May, the mother-of-four revealed she felt like an ‘inconvenient footnote’ in the vaccine success because she has no Covid antibodies despite two jabs.

The cumulative treatment she was undergoing for her cancer had to be stopped because of the pandemic because it was too high risk.

Despite having two doses of the vaccine, tests for the Covid antibody three weeks after her second jab came back negative, meaning that Nicola isn’t protected against the virus.

She said on Lorraine in May that those with blood cancer are still ‘stuck’ in lockdown as the rest of the country opens up, with no idea whether they are protected against Covid even if they have the vaccine. 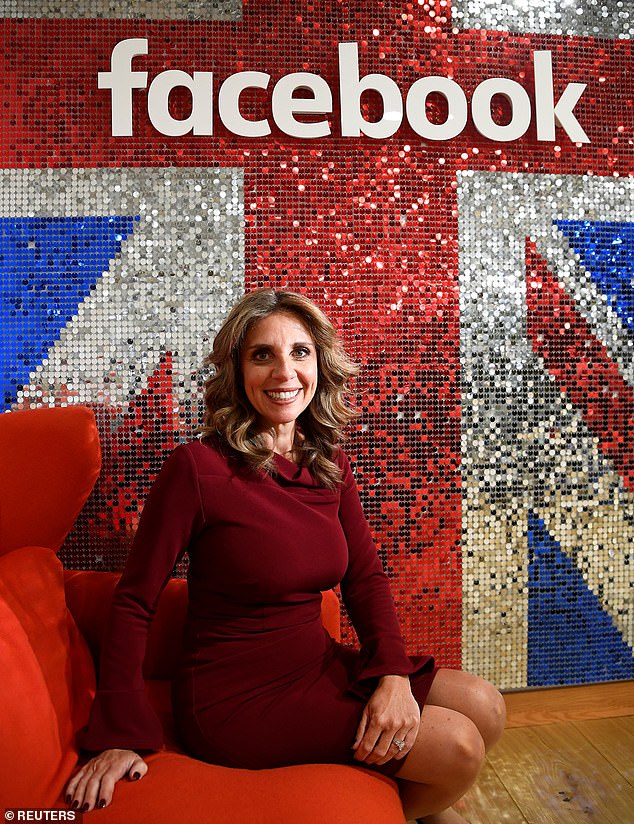 The 49-year-old businesswoman, from Manchester, is Facebook’s Vice-President for Europe, the Middle East and Africa, and was diagnosed with Follicular lymphoma in 2016

‘We’re here at this point now in the UK where everyone’s getting very excited’, she said. ‘The country is opening up and getting back to some sort of normal which is fantastic – but people like me with blood cancer can’t.

‘It really does feel now like we’re the forgotten victims of the pandemic, and in many ways we’re a bit of an inconvenient footnote in this otherwise really great success we’ve seen with the vaccine, so we’re a bit stuck’.

In April, a study from King’s College London stated that more than half of cancer patients may not be protected against coronavirus after a single dose of the Pfizer vaccine.

According to Blood Cancer UK there is still not a clear picture of how successful the vaccine will be at protecting people with the disease from Covid. 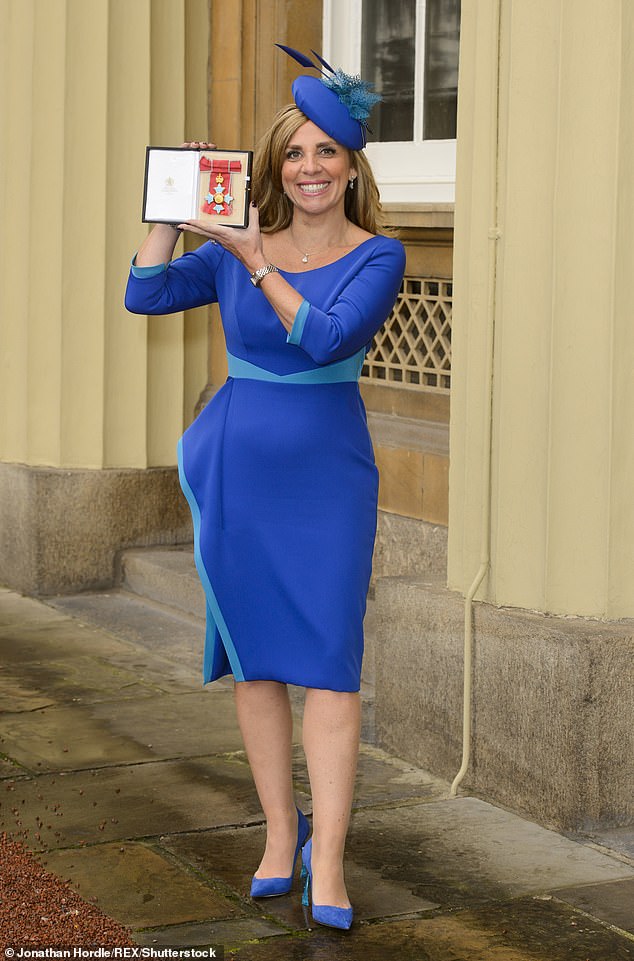 In 2018, Nicola, pictured at Buckingham Palace in 2015,  launched the Follicular Lymphoma Foundation (FLF), which is dedicated to helping people with the disease to live well and get well

Nicola went on: ‘There’s about half a million people in the UK living with a compromised immune system and about 230,000 of them have some form of blood cancer.

‘We were always at much higher risk from Covid, but the early evidence is showing the vaccine is much less likely to work for us. Where we are now, nobody, if they’ve got blood cancer, really knows if we’re protected by the vaccine.

What is follicular lymphoma?

Follicular lymphoma is a type of non-Hodgkin lymphoma and develops when the body makes abnormal white blood cells.

The most common symptom of the blood cancer is swelling in the neck, armpit or groin.

Other symptoms include tiredness, weight loss, night sweats and fevers.

The cancer is slow-growing and does not always require immediate treatment.

Any treatment usually involves a combination of chemotherapy and immunotherapy.

‘We’ve heard the people who were very vulnerable were the people that very early on got the vaccine. We’ve herd of people going out having both the jabs and and getting Covid and sadly some people who have died. ‘

Mother-of-four Nicola added that the lack of research into vaccine effectiveness for those with cancer is ‘really cause for concern’ and said that it doesn’t just impact her, but her family too.

‘It’s not like my family can now go out’, she explained. ‘Even though they are vaccinated, because they still pass it on to me, I have no antibodies at all.’

The mother wants the government to fund more research into how the vaccine is working, and include those with comprised immune systems in vaccine booster shot trials.

Speaking on BBC2 last year, Nicola said she tries not to think about the fact her disease is terminal.

She added her four children take comfort in the fact she’s still working despite her incurable cancer diagnosis, because it reassures them that she’s ‘alright’.

‘They say that they see how I am, they look me, and I do ask them, I’m asking them all the time, “How are you about it?” and they go, “Well, you’re alright Mum, if you’re working, if you’re living what seems like our normal life, then we’re OK”.’