The stars aligned for New York's "east coast" Comic-Con this week, ranging from acting legends such as Ralph Fiennes and Sir Patrick Stewart talking up their projects The King's Man and Picard, Ryan Reynolds on the marketing trail for The Free Guy, and Australia's own Margot Robbie fluttering in for Birds of Prey.

Also among the film and television titles jockeying for attention at the four-day convention were HBO's highly anticipated new series Watchmen, the freshly-launched Batwoman and the upcoming Star Trek series, Star Trek: Picard, the not-a-sequel-but-kind-of-sequel to Star Trek: The Next Generation. 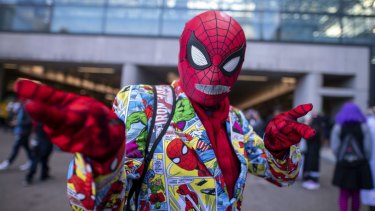 Loudest among those was the premiere of Watchmen, developed for television by Lost co-creator Damon Lindelof and based on the comic book of the same name, which seemed to generate huge buzz at the convention.

The book's characters were well represented in the "cosplay" of fans, dressed either as Regina King's TV character Sister Night or the comic book character of Rorschach, and on the billboards around New York's Javits Convention Centre, which were plastered with posters from the upcoming series.

The original comic, a sort of dark twist on the traditional costumed hero story, is set in a world where super heroes have become masked vigilantes; fans of the comic book are notably fierce in their love of the original work, including Lindelof who told the convention audience there were elements of the story that even he did not dare touch or change.

He also hinted that the series might only run for a single season, in keeping with the original comic's structure.

"One of the things that makes the original perfect is that those issues were well-thought-out, and it was clear that there was a beginning, middle, and end in mind," Lindelof said. "They knew exactly what they were doing, and I knew that we had to do the same." 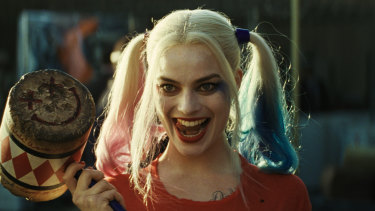 "We really want to see how this is received by you guys," Lindelof said. "If the conversation out there seems to suggest you're hungry for more, then we'll certainly take that into consideration. [But] we certainly didn't want this season to end with a dum-dum-dum and then wait until season two."

The convention also was the stage for big reveals from CBS Studios about its Star Trek franchises.

Audiences were treated to the first look at the new season of Star Trek: Discovery, which catapults the USS Discovery ship and crew 930 years into the future, as well as the latest mini-episodes of the franchise's Short Treks series, including one featuring the crew of Captain Pike's USS Enterprise. 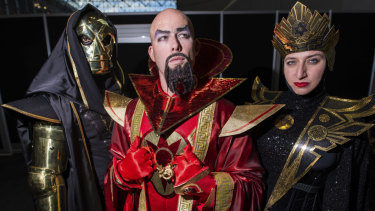 Who can save them now? Fans dressed as Klytus, Ming and Kala from Flash Gordon.Credit:AP

Note the unknowing: Pike's Enterprise – led by Captain Pike (Anson Mount), and featuring Number One (Rebecca Romijin) and Mr Spock (Ethan Peck) – was the breakout "star" of Discovery's last season and the show's fans have been loudly asking for more.

A new extended trailer for Star Trek: Picard was also screened to the crowd at Madison Square Garden, which gave glimpses into the series, its key villains – teeny spoiler: it's the Romulans – and the guest appearances by original The Next Generation characters including Riker, Troi and Data.

The panel featured Sir Patrick Stewart, who is reprising the role of Captain Jean-Luc Picard for the series, the show's producers, Alex Kurtzman, Michael Chabon, Akiva Goldsman and Heather Kadin and members of its cast, including Australian actor Evan Evagora, who will be playing a young Romulan refugee, Elnor, in the series.

The show's producers confirmed the series would premiere in January, 2020; in Australia Star Trek: Picard will air on Amazon's Prime Video platform.

And while there was little in the way of a glimpse into the upcoming Star Wars movie, The Rise of Skywalker, there was much buzz around Project Luminous, the franchise's post-film plans in the publishing realm, including – this is big news to Star Wars book fans – a new trilogy of books from author Timothy Zahn focusing on the character of Grand Admiral Thrawn. (He of the blue face and thin, mean lips.)

The east coast convention seems also to play more specifically with television over film, in part because its timing -later in the year than San Diego – sits neatly with the September-October launch of the US television season.

One of the other key differences between New York's Comic-Con and its older rival in San Diego is that the New York event leans more into the city's larger venues, with premiere screenings held at both the Hammerstein Ballroom at the Manhattan Centre and the iconic sporting stadium Madison Square Gardens.

Unusually, organisers say, there is little rivalry between the two events.

"There is no turf battle," ReedPOP’s director of studio relations Brien McDonald told US media this week. "These things always come down to timing, when are the big marketing beats hitting for particular series? Talent availability is the other major factor and now, more and more, content availability."

This year organisers say the four-day convention sold more than 200,000 tickets; organisers say it eclipsed San Diego Comic-Con in terms of bodies through turnstiles back in 2014.