Leaving her mark. Kim Kardashian revealed another one of Pete Davidson‘s tattoo tributes.

The KKW Beauty founder, 41, revealed the fresh ink on Saturday, March 26. “My girl is a lawyer,” reads a tattoo on Davidson’s collarbone. Though she didn’t specify that it was her boyfriend, 28, the Keeping Up With the Kardashians alum recently described the tattoo to Ellen DeGeneres.

“He has a few tattoos, a few cute ones that he got [for me],” Kardashian said during a March 16 appearance on The Ellen DeGeneres Show.

She revealed that there are a few pieces of body art that the Saturday Night Live star dedicated to her since they got together in fall 2021, but there’s one that she prefers to the rest. “I think my favorite one, it says here,” the Skims founder said gesturing to her collarbone, “it says, ‘My girl is a lawyer.’ And that one’s really cute.” 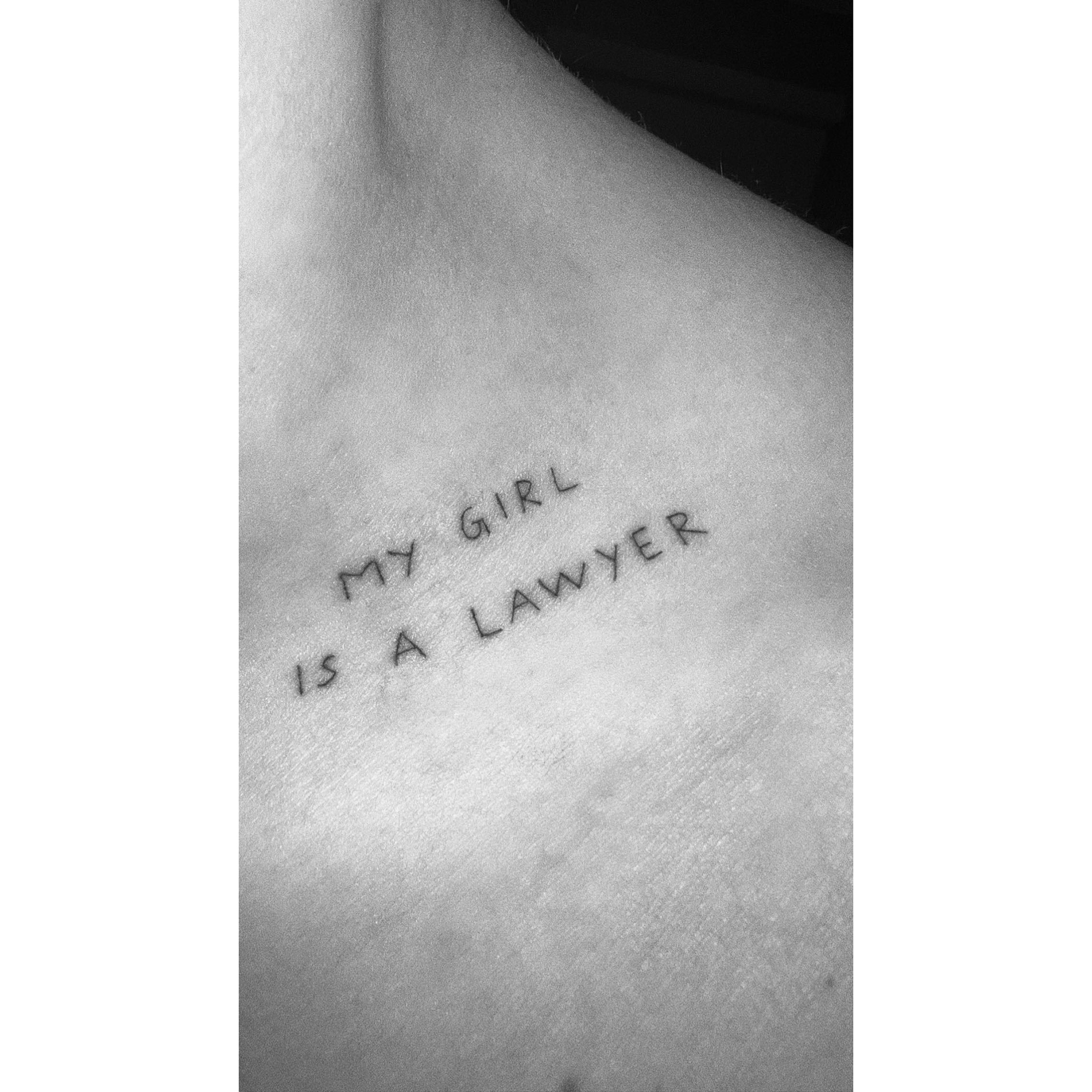 Kardashian — who was declared legally single earlier this month after filing for divorce from Kanye West in February 2021 — has been open about her journey to become a lawyer after registering with the California State Bar to study law in 2018. She announced in December 2021 that she passed the “baby bar” exam on her fourth try.

“The experience taught me so much and I’ve never worked so hard on something in my life,” Kardashian told Hong Kong Vogue in their April 2022 cover story about finally passing the exam. “I had to be really diligent about studying and dedicated every spare minute I had to it.”

Everything to Know About Kim Kardashian’s Lawyer Journey

She continued: “I’m very passionate about Criminal Justice Reform and I want to advocate for those who I feel they were wrongfully convicted. I dream of one day creating a successful law firm.”

While the California native’s favorite tat of Davidson’s honors her big goals, that’s not the King of Staten Island star’s only tattoo for his girlfriend. Kardashian, who shares four children with West, teased that Davidson has “a few” pieces of art on his body in her honor, but her name needed a marking more permanent than ink.

“But the ‘Kim’ one is not actually a tattoo. It’s a branding,” she told DeGeneres.

“I think he was just like, ‘I want something that’s there, that I can’t get rid of [it like] my tattoos,’” Kardashian said, adding that her beau didn’t want to be able to cover or remove her name. “[He] just wanted it there as like, a scar.”

Other tattoos, however, are not exactly forever. Davidson explained that he is removing many of his arm and neck tattoos for his acting career.

“I didn’t think that they would put me in stuff — like the movie business. I thought after SNL, it’s a wrap,” the New York native joked during a May 2021 appearance on Late Night With Seth Meyers.

He continued, “It takes like three hours — you have to get there three hours earlier to cover all your tattoos, because for some reason, people in movies, they don’t have them that much.”

Davidson added that he had a key piece of advice to others looking to get a lot of ink: “If you’re going to get tattoos, just make sure you really, really want it — and aren’t on mushrooms.”