Nanny for an ultra-rich New York City family details their blatant disregard for social distancing – revealing they still have manicurists, trainers, and a CHEF coming and going

A nanny for a mega-rich New York City family has revealed that she’s been expected to follow them out to the Hamptons during the pandemic — where they have sports coaches, manicurists, chefs, and personal trainers coming in and out every day.

That nanny told her story to The Cut anonymously, detailing the particularly unsafe conditions she’s been forced to endure.

She is also hardly the only member of ‘outrageously large’ household staff that the family employs, and has been shuttled back and forth between Manhattan and the Hamptons in the past several weeks. 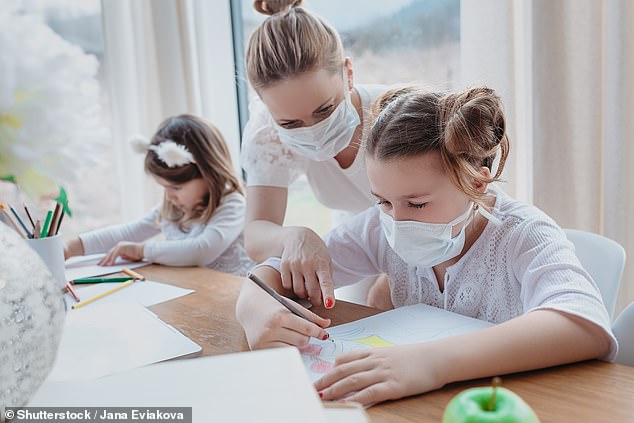 Unsafe conditions: A nanny for an ultra-rich NYC family has detailed what it’s been like to work during the pandemic (stock image)

The anonymous nanny’s employers are ‘an ultrahigh-net-worth Manhattan family’ who don’t seem to be following social distancing mandates at all.

During the week, she said she has been expected to stay with them at their Hamptons estate, along with the rest of a large staff.

‘There wasn’t really a conversation about moving up to the Hamptons with them; it was basically just, “This is how it’s going to be,”‘ she said.

And they’re hardly keeping to themselves out east, either. The nanny said there have been ‘so many people coming in and out of the house’ since they got out there.

In addition to the chef, who goes to the supermarket every day, there is also a hair stylist, a manicurist, and a personal trainer — all of whom go to other people’s homes, too.

A sports coach comes for the kids, just as he does for other kids in other households in the area.

‘They haven’t asked any of the workers to stop coming in,’ she said. ‘Why don’t they care?’

The staff has been working extra hard to keep themselves and the family safe. One has been washing the kids’ clothes ‘nonstop’ because they come into contact with lots of people.

The nanny herself has been quarantining boxes that get delivered in the pool house, hoping that any virus on them will die.

‘They don’t seem to be worried, even though when I started coming into the Hamptons, I had a cough,’ she added.

The nature of their jobs has also changed. The nanny appears to be doing the homeschooling, too — though that hasn’t stopped the kids’ father from complaining about them being around all day.

‘The dad sits on the couch all day on the phone doing business. But then he has the gall to tell people, “Oh, it’s so hard being with my kids. They’re doing all this homeschooling,”’ she said.

And in another shocking twist, the household staff isn’t even technically quarantining with the family: On weekends, a private car — which is also hired out by other people — drives them all back to Manhattan.

The nanny said that going back and forth has been scary for everyone, particularly a co-worker who lives with a big family, and another whose husband is sick.

They are also expected to bring back items from Manhattan that the family can’t find in the Hamptons, like a specific type of toilet paper.

Unfortunately, she can hardly just quit. She said that she and many of the other employees are ‘foreign-born’ and feel unable to stick up for themselves.

The few people who quit since the pandemic began were told they were not getting a reference, she added.

When the nanny herself questioned the move to the Hamptons, she said she was screamed at and told she ‘had better come in or else.’