Australian diplomats have begun talking to Myanmar’s government in exile but Australia has decided against imposing additional sanctions against the country’s military government.

A group of ousted lawmakers – many of them previously part of Aung San Suu Kyi’s National League for Democracy party – have formed the shadow government in the wake of the February 1 military coup called the “National Unity Government” to campaign for the return of democracy in the country. 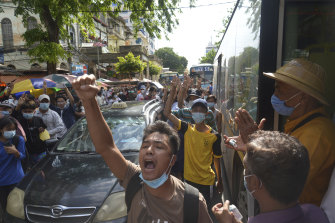 Burmese Australians have been urging the federal government to reach out to members of the NUG in the wake of the coup, which resulted in the overthrow and detention of Suu Kyi.

Appearing at a parliamentary inquiry into the Australian government’s response to the coup, Department of Foreign Affairs and Trade assistant secretary Lynda Worthaisong confirmed there had been contact made with the group in the last month but it was at an official level only.

“My recollection was the decision was taken to engage carefully and where possible outside Myanmar,” she said.

Ms Worthaisong said the situation in Myanmar remained “very bleak” and “deteriorated even further” since officials appeared before the last parliamentary hearing a month ago. More than 800 people have died, including more than 50 children, in the violence that has followed the military coup.

Ms Worthaisong confirmed Australia had decided not to impose additional sanctions against Myanmar or its officials in the military – known as the Tatmadaw – because it could limit the influence Canberra had on the military government. She said “there would be very little to any positive impact to people on the ground” in Myanmar if sanctions were imposed, pointing out that Japan, South Korea and ASEAN countries have not introduced sanctions.

Australia has previously sanctioned five officers in the Tatmadaw who are accused of overseeing violence against Rohingya Muslims, but this pre-dated the military coup. Countries outside the immediate region, such as the United States and the United Kingdom, have introduced sanctions since the coup.

“We consider as a country in this region that our interests are best served by having influence, direct influence,” Ms Worthaisong said.

It was also revealed Tuesday night’s budget had set aside more than $300,000 for cooperation with Myanmar’s military in error.

Foreign Minister Marise Payne announced in March that Australia had suspended its defence cooperation with Myanmar’s military in the wake of the February 1 coup by the country’s armed forces, the Tatmadaw.

According to Defence’ portfolio budget statement, there is $325,000 earmarked for defence cooperation with Myanmar in 2021-22.

Department of Defence assistant secretary David Lewis told the inquiry it was an “error in the budget”.

“So the 2021-22 estimate for expenditure on table 53 of the portfolio budget statement was incorrect. That number should read zero,” he said.

“Defence is in the process of preparing a corrigendum to the portfolio budget statement that will correct this error.”

Australia announced earlier this month it would extend the temporary visas of Myanmar nationals so that they aren’t forced to return to the country in the wake of the coup. there are currently 3384
temporary visa holders in Australia from Myanmar, including 1500 student visa holders and 760 bridging visas.