An AFL footballer has spoken of his deep love and admiration for his missing older brother, as police scale back the search to locate two missing fisherman.

Four days after police found the tinnie belonging to Geoffrey Hibberd, 33, and Jason De Silva, 20, the anglers remain unaccounted for. 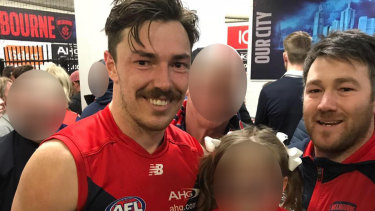 The Demons backman pledged to always care for his brother's young daughter Indie, who "adored" her father, according to the post.

"You were an incredible and loyal friend and the most amazing father to Indie. She was your world and she adored you!" he said.

"I'm so lucky I had the gift of you as a Big Brother through my whole life.

"You were my first point of call growing up when I needed someone, you would drop anything you were doing at anytime, just to help me."

On Thursday, police said they had scaled back the search for the anglers. Water police will continue to search the Western Port Bay area with assistance from the police air wing. The Marine Investigation Unit is also investigating.

Melbourne coach Simon Goodwin said he wished he could give Michael a hug to console him, saying he had regular conversations with the dashing defender and the club was offering support to his family.

"You just want to go and see him and give him a hug, that is one thing you do miss at the moment, that social interaction and connection with people," Goodwin said.

"You just want to be there for him. We can't but I can call him, I can contact him, I can show care in other ways and that is what I am doing."

Hibberd joined Melbourne from Essendon after serving, along with his teammates, a season-long doping suspension in 2016, with his relationship with Goodwin a key factor in his decision to switch clubs.

"It's obviously without question a really tragic situation for Michael and his family. They are clearly doing it really tough at the moment. I have been in contact with Michael numerous times every day and he is holding up really well and clearly he has got a lot of mixed emotions and coming to terms with the whole situation," Goodwin said.

"The club have put a great support network around him and we are working really closely with the family and the players have certainly rallied behind him with messages and we will do anything we can to support the family."

Recreational fishing has been banned in Victoria under the state's stage 3 restrictions to contain the coronavirus, with on-the-spot fines of $1600.