A mother-of-three was left stunned after her five-year-old son called her a c*** in a handmade card he’d thoughtfully created for her for Mother’s Day.

Melanie Dadson, 28, fron Northfleet, Kent, said she spat out her coffee after reading the foul-mouthed blunder – which her son Harrison claimed was meant to say ‘cute’.

The youngster proudly presented his potty-mouthed card to Melanie on Mothering Sunday – leaving her and partner James Dadson, 30, in fits of giggles. 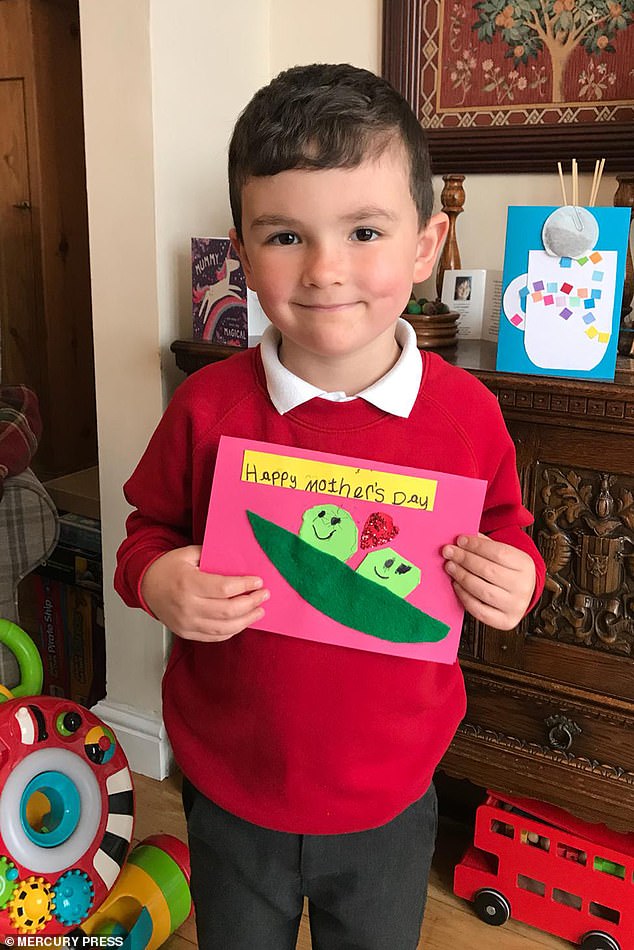 Harrison Dadson, five, pictured with the card he made, accidentally mispelt ‘cute’ and wrote ‘c***’ in the Mother’s Day card thoughtfully made for his mum Melanie 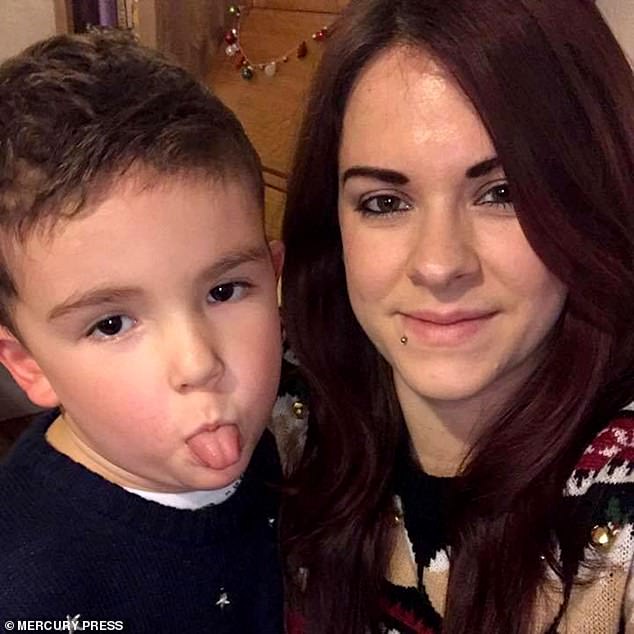 Melanie, 28, pictured with Harrison, loved the card and said she couldn’t help but laugh when she realised the mistake he had innocently made

Melanie said: ‘I was really shocked. I actually spat out my coffee when he presented it to me, but then we had a laugh about it.

‘He did start reading it out to me and got to that word and said, “oh I think it says cute, but I think I might have spelled it wrong.”

‘I said, “possibly, yes. I really hope it was meant to say cute”.

‘He’d made it at school in the week, but I’m not sure they vetted all of the cards before they were sent home.

Melanie said she thought the card was ‘lovely’, and was proud of her young son for writing most of the words correctly in the card. 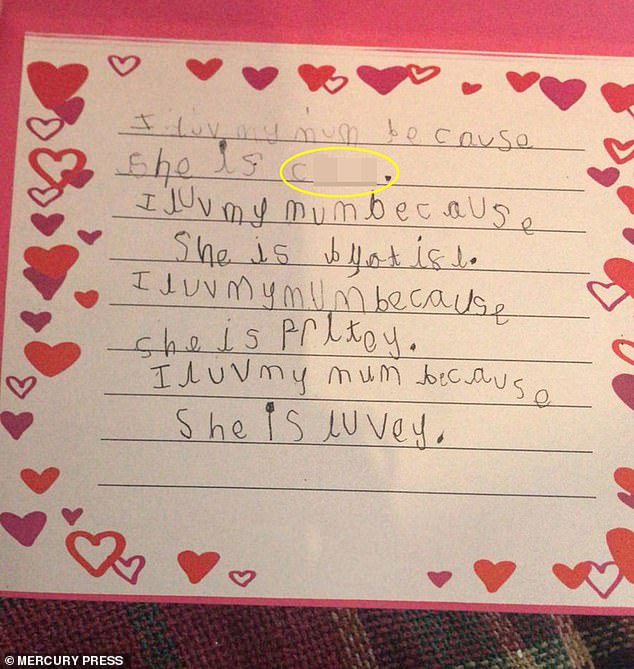 Harrison carefully wrote a heartfelt note inside the card, pictured, but made a key spelling mistake on the second line. Melanie said she was proud of her son for spelling ‘because’ right 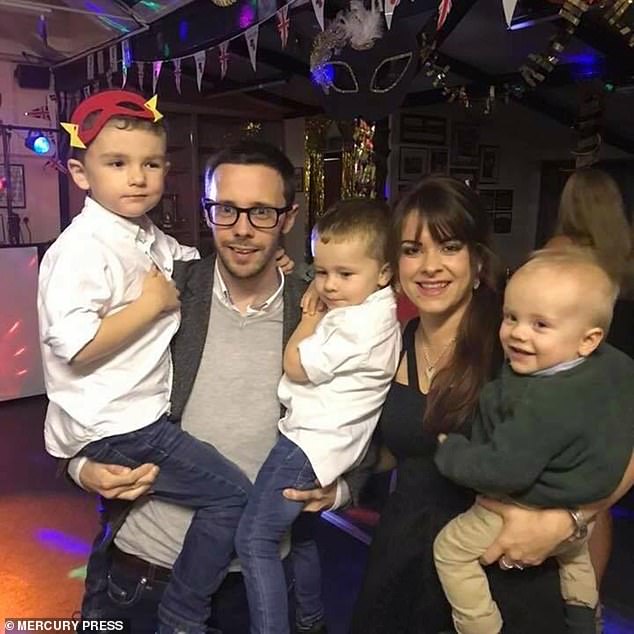 Melanie, pictured with her family left to right Harrison, five, partner James, 30, Hadley , three, mum and Harley, one, said the card was ‘one for the mantlepiece’

She said: ‘It was actually lovely because his handwriting is really good. I was proud of him because we’ve been working on it, and he spelled “because” correctly.

‘Harrison was a bit upset that I was laughing at his card, but I explained it was because I was really happy.’

The card, which had two peas in a pod on the front, read inside: ‘I luv my mum because she is c***. 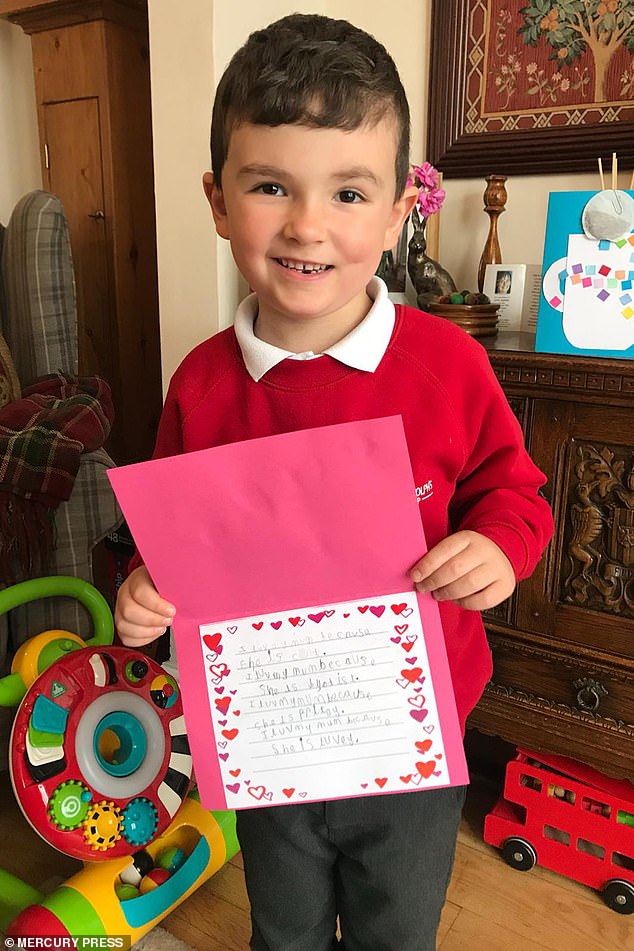 Harrison, pictured with his card, was a little upset that his mother laughed but Melanie explained that she was just very happy with it 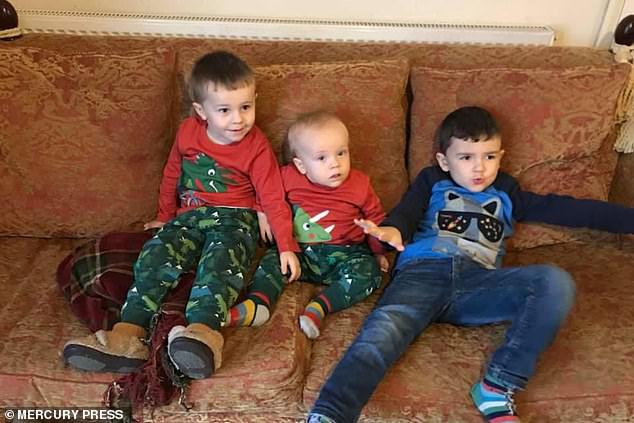 The mother-of-three said Harrison, far right with his two brothers Hadley and Harley, didn’t know what the word meant and she didn’t draw attention to the fact it was a swear word 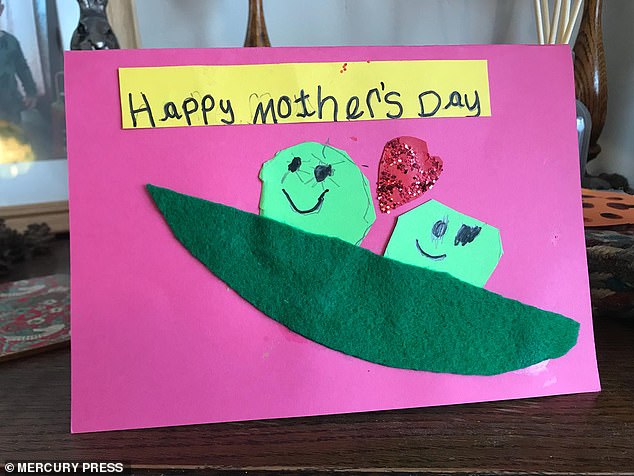 The card, pictured, had been carefully written by Harrison at school and he had stuck two peas in a pod on the front of the pink paper

Full-time mother Melanie, who is expecting her fourth child in September, said Harrison doesn’t know what the word means.

Melanie said: ‘He wouldn’t have heard it anywhere or known what it means. I didn’t draw attention to the fact it was a naughty word.

‘He accepted that he’d spelled it wrong, and what it was supposed to be, so I didn’t see the point in introducing him to the real meaning.

‘I shared it with my friends and mum and they thought it was great. It’s definitely one for the mantelpiece.’