A mother has revealed she’s not fussed about Christmas dinner this year and admitted she wants to take her family to McDonald’s instead.

The anonymous woman posted to the British parenting forum Mumsnet to share her thoughts on the day saying she is considering getting a ‘drive through McDonald’s and eat it at the beach.’

She explained she is living abroad and not returning to the UK for the festive season, therefore she’s ‘not really fussed about Christmas dinner’ because her family ‘don’t love it that much.’ 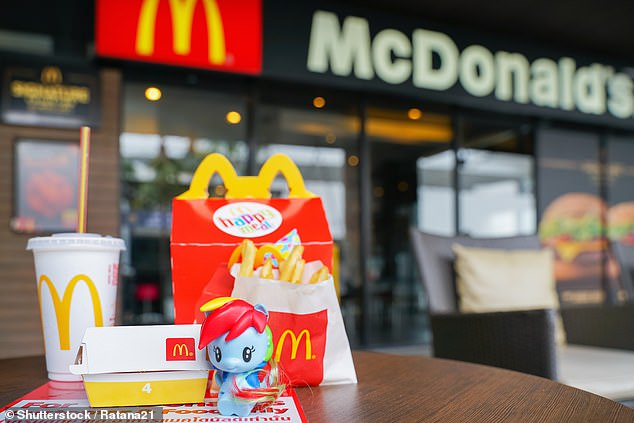 However, the woman explained that she fears she may have to lie about her festive plan because her family members ‘would be outraged.’

Many people loved the idea and some said that she shouldn’t feel the need to defend herself.

The original poster who lives with her husband and four-year-old daughter explained: ‘It would be bad to do this…wouldn’t it..? We live abroad and aren’t back to the U.K. to family this year, quite happy to be at home.

‘Not really fussed about Christmas dinner, we don’t love it that much. How bad would it be to get a drive through McDonald’s and eat it at the beach? 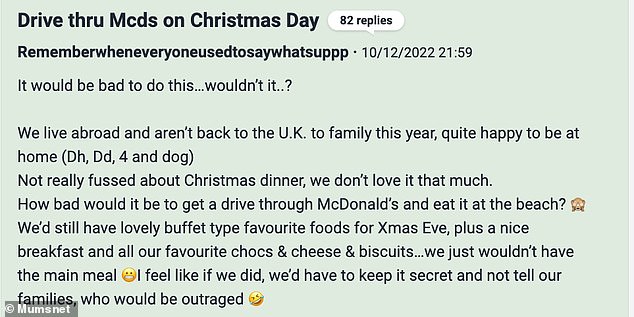 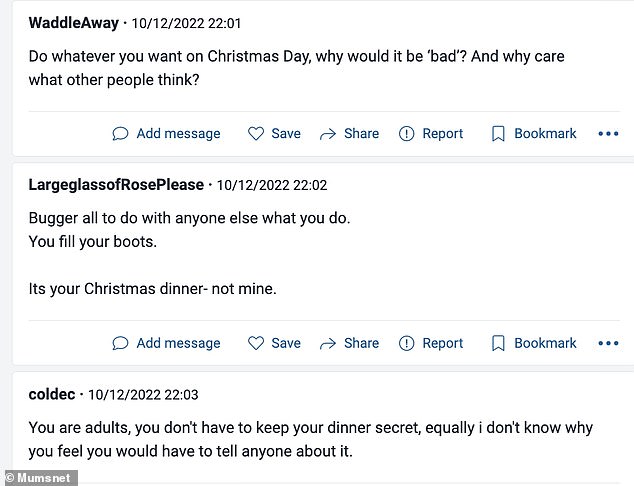 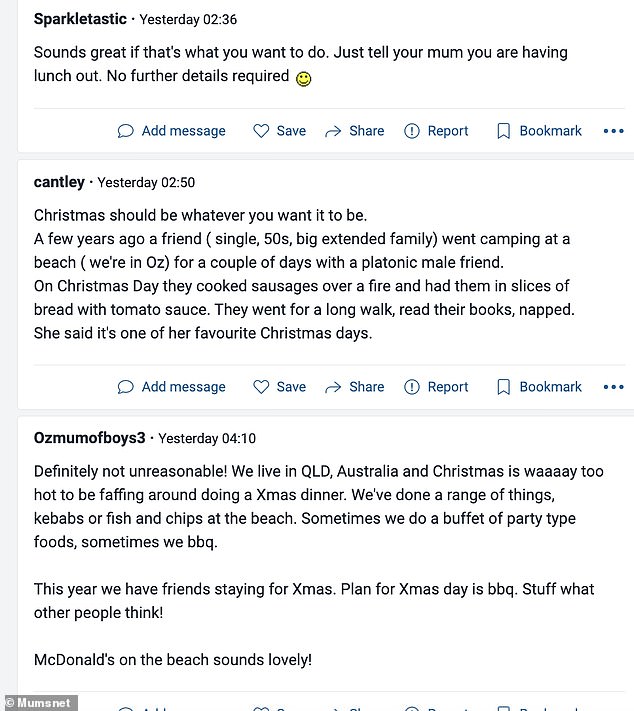 ‘We’d still have lovely buffet type favourite foods for Xmas Eve, plus a nice breakfast and all our favourite chocs & cheese & biscuits…we just wouldn’t have the main meal.

‘I feel like if we did, we’d have to keep it secret and not tell our families, who would be outraged.’

Many suggested she should do what she wants on Christmas day as it should be whatever she wants it to be.

One person said: ‘Do whatever you want on Christmas Day, why would it be ‘bad’? And why care what other people think?’

Another wrote: ‘Bugger all to do with anyone else what you do. You fill your boots. Its your Christmas dinner- not mine.’ 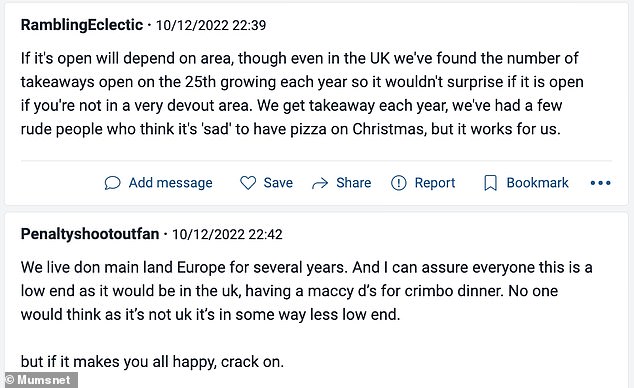 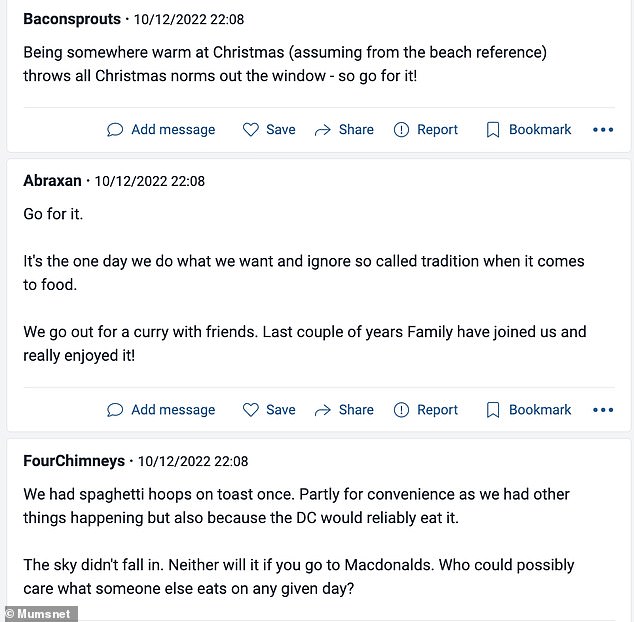 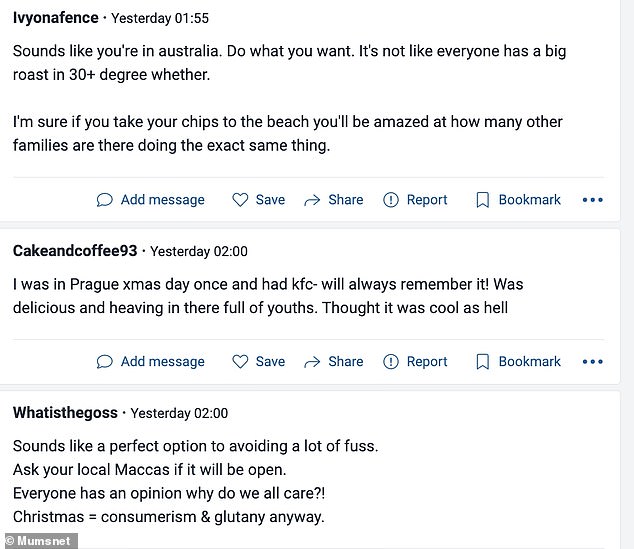 While a third wrote: ‘Go for it. It’s the one day we do what we want and ignore so called tradition when it comes to food.

‘We go out for a curry with friends. Last couple of years Family have joined us and really enjoyed it!’

Others admitted they have also skipped cooking Christmas dinner at one time or another.

One person wrote: ‘We’ve had a Chinese takeaway on Christmas day a couple of years and they were very low pressure years that I loved.

‘We don’t even like turkey so the whole Christmas Dinner isn’t really for us and the rest of it is really just a roast which we do once a week anyway.’

Another said: ‘We had pizza for our Christmas dinner the other year. It was great!’

While someone else wrote: ‘We had sausages, baked beans and chips one year because it was my kids’ favourite meal and they really wanted it for Christmas Dinner.’

Others admitted they have also skipped cooking Christmas dinner at one time or another, opting for Pizza or Chinese takeaways

A fourth person said: ‘We are having lasagne . There are only 3 of us and I asked Ds to choose his favourite meal .’

Others chimed in concerned if the burger joint was even open on Christmas Day.

One said: ‘Is it open? if it is then you are not the only ones doing it.’

Another said: ‘If it’s open will depend on area, though even in the UK we’ve found the number of takeaways open on the 25th growing each year so it wouldn’t surprise if it is open if you’re not in a very devout area.

‘We get takeaway each year, we’ve had a few rude people who think it’s ‘sad’ to have pizza on Christmas, but it works for us.’

Meanwhile, a mother divides opinion by admitting she finds friendships more stress than they’re worth