Kate Clarky, from Medway,  Kent, said she was appalled after spotting the top for sale for children aged up to two, and said that it will ‘attract sickos’ to children.

She posted a picture of the top and high-waisted leggings on a local Facebook page alongside an angry rant, but many accused her of being in the wrong and sexualising children’s garments.

‘This is by far not the worst case to use as an example. Poundland is selling a crop top for six to nine months on wards,’ she wrote online. 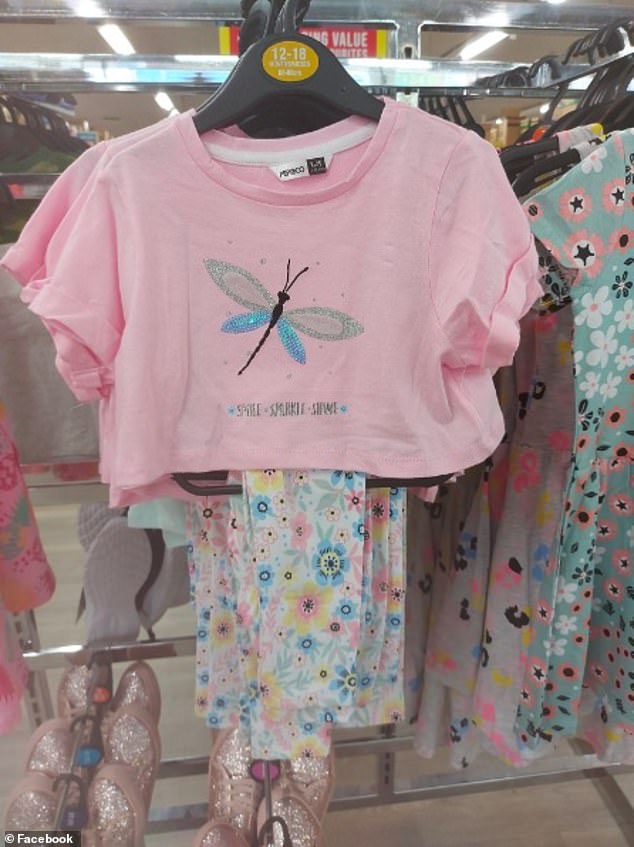 Kate Clarky, from Medway, Kent, said she was appalled after spotting the top for sale for children aged up to two, and said that it will ‘attract sickos’ to children.

‘Perhaps a vest would cover the midriff but what about on a two-year-old as it goes up to 24 months.

‘Is it just me? I find this really DISGUSTING.

‘It’s amazing how many people pass the buck to others OWN mindset, yes pedos will look at any child regardless whether they’re wearing a coat or crop top and shorts but personally I feel as though I don’t need to make my daughter perhaps more appealing for those sickos.’

The mum spotted the outfit in her local Poundland store and her post sparked a heated discussion with many mums agreeing but others blasting her.

‘Yes it is disgusting. My baby’s won’t wear nothing like that,’ said one. 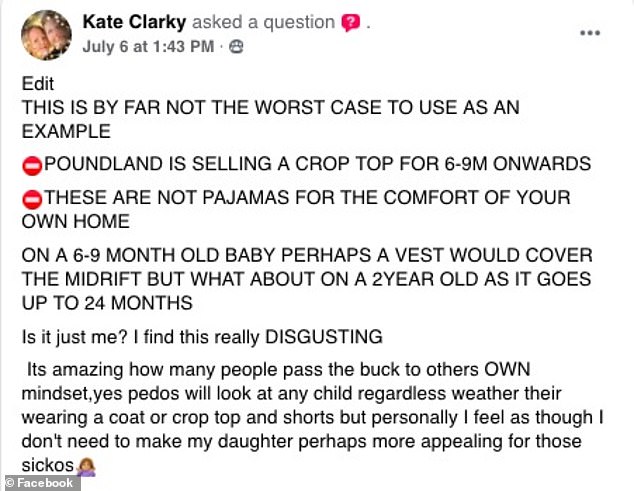 She posted a picture of the top and high-waisted leggings on a local Facebook page alongside an angry rant, but many accused her of being in the wrong and sexualising children’s garments.

But others were less sympathetic, with a woman called Lou Elizabeth writing: ‘So don’t buy them then – problem solved’ to which Kate replied: ‘I won’t ever buy anything like that and good luck to those that do.’

Lou Elizabeth responded by saying: ‘Well done you! Adults shouldn’t be sexualising children’s clothing. They are children. The problem lies with you.’

Kate replied: ‘I’m not personally sexualising the clothing but the world we live in has too many people that do! I’ll stick to keeping my kid a child for now thanks. But each to their own aye.’

Another wrote: ‘So wrong.

‘People are putting their tiny kids in bikinis.

‘Kids clothes these days are awful overall and way too adult looking, personally wouldn’t dress my kids in it. But each to their own,’ said another.

‘Kinda feel like this is how body issues in girls starts. Although my daughter was nine before she had cropped tops like that. I personally wouldn’t for children so young but it’s easily fixed with a vest.’

Another said: ‘I really disagree with this why would you put a nine month old in a crop top really.’

One local mum commented: ‘Totally disgusting and why do they make bikinis as well for babies? It’s just asking for trouble in my eyes.

‘I personally think a lot of music videos these days have a lot to answer for too with how young girls dress.’ 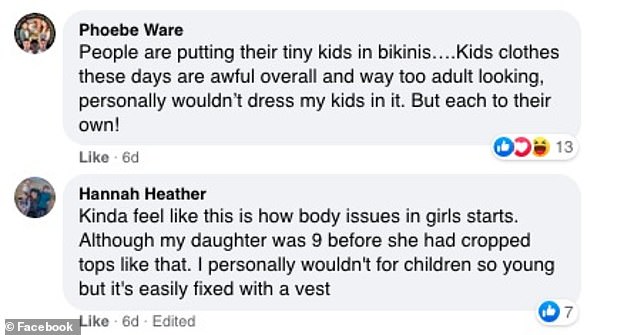 Many continued to slam the store, with one saying:  ‘I find it disturbing on three counts – that a manufacturer choose to make them – a family store chooses to stock them – and it seems some parents are prepared to let their children wear them.’

Others disagreed – and said that it was completely innocent.

‘Clothes are just fabric, if you sexualise them no matter the age of person then you’re no different than the people who blame the victim’s outfits.

‘Control your thoughts. To even of thought something like that is wrong

‘We are supposed to teach people to be brave and strong. Not feed into the sexualising clothing and scare them into covering their whole body like a black sack,’ said one.

‘STOP sexualising children and the clothes they wear.

‘STOP posting public pictures of your children and then claim you don’t bait them,’ wrote another.

‘I personally feel they’re trying to sexulising our kids!! Obviously each to their own but I’d like to keep my lil girl a child.’

A spokesman for Poundland said: ‘We’re bemused. This is just a T-shirt and leggings set that’s a summer best-seller.

‘What’s more the leggings are high-waisted so when worn together, no midriff is on show. That’s obviously why our customers like it.’