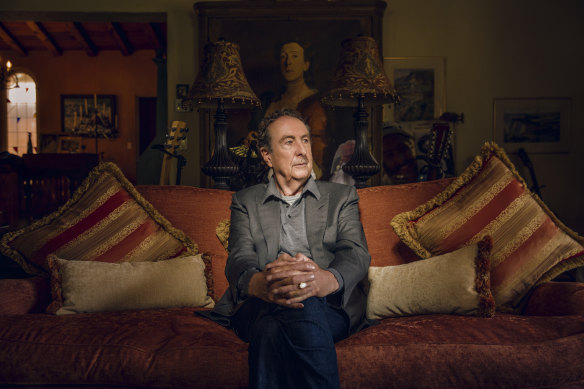 Eric Idle is still looking on the bright side of life at 79.

Eric Idle is used to hearing about the huge influence Monty Python had on the generation growing up in 1970s England but he was surprised to learn about his bizarre role in my early sex education – or miseducation.

It all stemmed from a publication called The Rutland Dirty Weekend Book (washable edition) Idle wrote as a spin-off to his Rutland Weekend Television sketch series. Aged 10, I nicked it from my big brother’s bookshelf and pored over the naughty bits, especially a section entitled The Vatican Sex Manual.

It was illustrated by photographs of Idle and a model adopting dozens of positions in which it was patently impossible to have sex, all allegedly having received the papal tick of approval.

Taking it all too literally, I breathlessly related to my impressionable schoolmates the information that, for instance, the missionary position involved a couple kneeling in prayer on opposite sides of a bed. Result: a lot of very bewildered youngsters.

Idle thinks this is hilarious.

“I’m glad for anything we could do to confuse you,” he says speaking over Zoom from his Los Angeles home. “I take full credit.”

I still have that copy of The Rutland Dirty Weekend Book and, unlike much of the humour from that era (I’m looking at you Benny Hill and The Goodies), it has barely dated.

As does much of the work of Idle, John Cleese, Michael Palin and the rest of the Python writing and performing collective.

“We’d read out to each other and if it made us laugh it would go in a show and if it didn’t make us laugh, we’d sell it to the Two Ronnies,” Idle says.

Then there was the material that was just too zany for the Two Ronnies, such as the now iconic Nudge Nudge sketch.

Famously, the Nudge, Nudge sketch is one of the few the team wrote that had a punchline. Mostly they eschewed the conventional payoff and relied instead on Terry Gilliam’s bizarre animations to link one sketch to another.

“It’s always about to make sense but never quite does,” Idle says.

Idle grew up in England’s north and midlands. His Yorkshire father died in a road accident when Idle was just two and at the age of seven he was dispatched to a boarding school in Wolverhampton by his mother, who remained traumatised by her husband’s death. 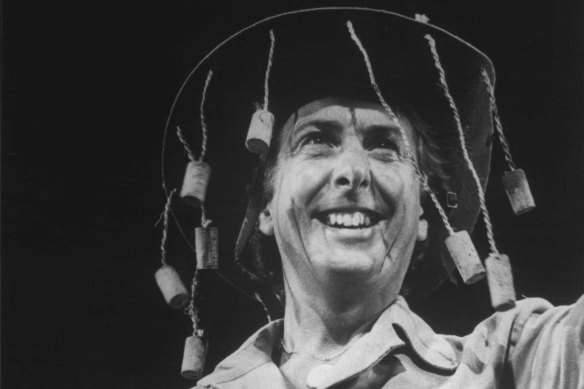 Eric Idle penned many of Monty Python’s most memorable tunes, including The Bruces’ Philosophers Song.Credit:

It was at Cambridge University that he met Cleese and Graham Chapman and shortly afterwards, Palin, Gilliam and Terry Jones, completing the team that was to unleash Monty Python on an unsuspecting public.

“It’s still amazing to me that people still refer to and watch Python,” Idle says. “It’s on Netflix you know? That’s amazing. Incredible.”

But there must be some material he looks back on with at least a little cringe?

“Well, you don’t look through your old work saying, ‘Well, that was shite.’ And I found that, thanks to Twitter, there’s nothing that somebody doesn’t think is absolutely wonderful, and the best thing you ever did. You go, ‘No, that was a terrible film. That really sucked.’ And they are saying, ‘That’s the best thing he ever did.’ You go, ‘Oh, OK. Maybe’. There’s nowt so queer as folk, as they used to say in Yorkshire.

“I think the other thing about Python is, because it was a portmanteau show written by lots of different people, people would always say, ‘Well, it isn’t all good.’ But they can never agree on which the bad bits were. Something always appealed to somebody.”

Music has always been a huge part of Idle’s life. He is an accomplished guitarist and wrote many of Monty Python’s most memorable and wittiest musical numbers, including The Penis Song, The Galaxy Song and The Bruces’ Philosophers Song.

But his best-known musical moment by a country mile is, of course, that iconic scene when he warbles Always Look On The Bright Side Of Life while hanging from a cross at the conclusion of Life of Brian.

“You know it is the number one funeral song in the UK, don’t you?” he says. “It’s been there for 20 years. But the thing about having a funeral song is you don’t get any royalties. It’s the one top 10 you don’t really need to be in. But still, I like the fact that people do bury each other to that song. I think it’s kind of cute.”

The funny side of death has always fascinated Idle, an atheist (although he has said he is uncomfortable with that label because it implies there is a god in which not to believe).

For years he has laboured on and off on a project entitled Death, The Musical, which he concedes is unlikely ever to make it to the stage.

“I always have these stupid ideas and I just persist in them,” he says.

He says he’s requested a couple of numbers from Death, The Musical at his own funeral because “it’s probably the only chance anybody will ever get to hear them”.

And only recently he revealed his own terrifying brush with mortality when he was diagnosed with pancreatic cancer.

“It was funny because I had been writing Death, The Musical for quite a long time,” he says. “It’s about a writer writing a show called Death, The Musical, who finds out he’s dying and I needed a disease to get rid of him. I said to my doctor, ‘What’s the best way, quickest way, to finish a character off?’

“And he said, ‘Pancreatic cancer. They only have three weeks’. I said, ‘Perfect’.

“About 10 years later we’re looking at a TV screen and there’s a little tumour. I said, ‘What’s that?’ And he said, ‘Pancreatic cancer’. And I laughed, because the irony was too great.”

Happily, Idle was diagnosed early and the outlook is positive after surgery at Los Angeles’ Cedars-Sinai hospital.

Now he’s looking forward to returning to Australia to spend time with family (his first wife, actor Lyn Ashley, is Australian) and perform in an “in conversation” show with Shaun Micallef in Sydney next month.

“I love Sydney,” he says. “You know you’re going to have friends in the audience so I’ll do my best to disappoint them.”

He’s only doing a single show because he thinks he might not have the stamina for a tour.

“You don’t want to be passing out halfway through the second act. It doesn’t look good on stage.”

But at 79, he says, he has no plans for giving up his occasional forays back into show business and counts himself lucky to still be able to entertain people with his wit and music.