Born early in the early 1990s to champion the builder, the sawmiller and the miner before adding the mariner and stevedore three years ago, the CFMMEU formally began to break apart amid bitter internal divides on a hot afternoon in the Hunter Valley town of Cessnock on Monday.

Mining delegates representing almost a fifth of the union’s members voted at their quadrennial convention to quit the mega union, which its likely next national secretary Christy Cain claimed in a personal address to rank and file members still had the power to “bring down governments”. 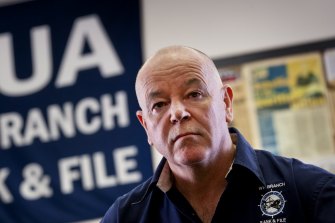 Maritime Union of Australia official Christy Cain has urged miners to stick with the CFMMEU.Credit:Ross Swanborough

“We need the miners as much as they need us,” said Mr Cain, recalling being arrested for protesting with mining workers in the United Kingdom under the Thatcher government as a younger man.

"There is no union in the country that can do what we can do together," Mr Cain said over folk music and footage of the different parts of the union at rallies and picket lines together in the social media video. "I urge all the miners to stick solid, stick fast with the union."

But 327 mining delegates, who represent the union on the ground (and under it) at mines across the country, would have none of it.

"The structure of the amalgamated Union once served us well, but that ceased to be the case some time ago," a statement unanimously endorsed by the delegates at the quadrennial convention in Cessnock reads. "Now there is just macho posturing and chest beating." 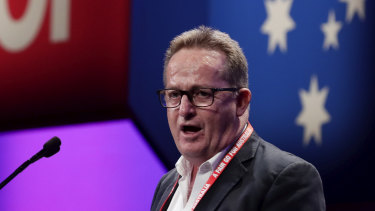 Their divisional president, Tony Maher, who negotiated with the government for legislation last year to let the union split, gave a rousing speech giving his case for an independent mining union.

“We are respected by all sides of politics even where we disagree — except the Greens,” Mr Maher said in an apparent backhanded reference to both construction union officials’ conflicts with other unions and the ALP and a rejoinder to those who criticised him for working with the government.

But there is some distance to go in the CFMMEU’s unravelling because it has to be approved by the more than 20,000 mining division members. A legal challenge, as well as Mr Cain’s video, suggests that could become a protracted fight.

Over the weekend the union's dominant construction division launched a fresh appeal against a court judgment that blocked it from holding a national executive meeting, which is controlled by the construction and maritime wings.

The miners had alleged that if the national executive meeting had gone ahead last Friday, the construction division would have changed union rules to allow it to start poaching the miners’ members.

Such division and legal battles have their genesis in detailed leaks from a 2019 national executive meeting, where the secretary of Victoria’s construction and general division, John Setka, is alleged to have said the work of anti-domestic violence campaigner Rosie Batty had led to men having fewer rights. Mr Setka was convicted that year of harassing his wife via text message.

Since then, Mr Setka has pursued those in his union who he believed were behind the leaks or who failed in his view to offer him sufficient support. That includes the union’s former national secretary, Michael O’Connor, who was forced out of his role last year.