Zara Tindall’s husband Mike reflected on one of the most poignant moments of the Queen’s funeral in an Instagram post shared last night.

The ex-England rugby ace, 43, supported his wife for the moving service at Westminster Abbey, before they were joined by their daughter Mia for the Committal Service at Windsor Castle.

Following the state funeral, Mike posted a short video of the Sovereign’s piper playing the final lament as the Queen’s coffin was lowered into the vault at St George’s Chapel. 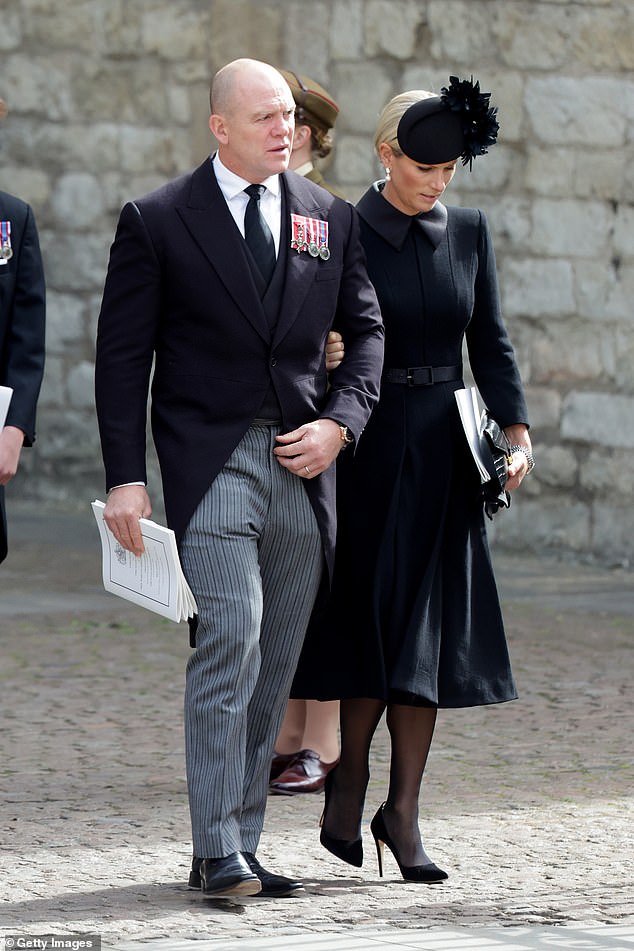 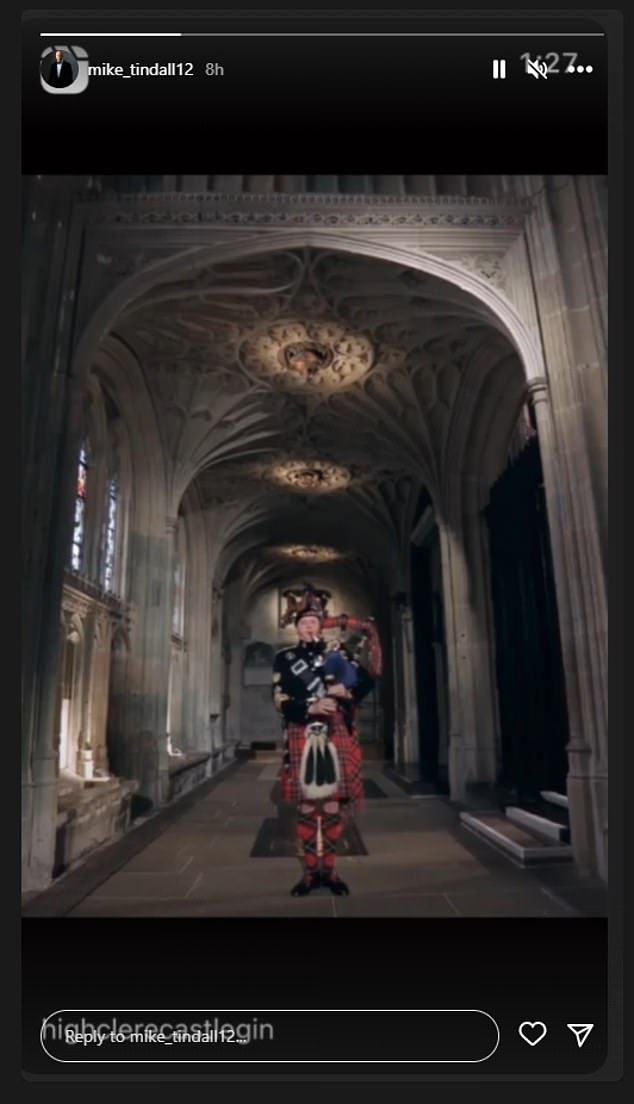 The ex-England rugby ace, 43, supported his wife for the moving service at Westminster Abbey, before they were joined by their daughter Mia for the Committal Service at Windsor Castle 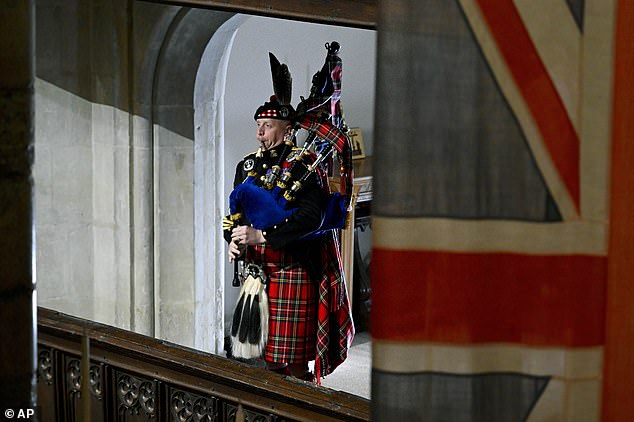 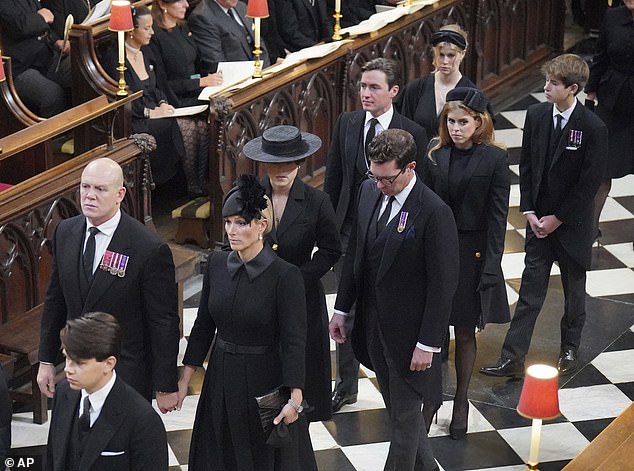 Mr Tindall has supported his wife as she mourned the loss of her grandmother, joining her at events including the vigil at Westminster Hall and the service following the procession to the Palace of Westminster last week.

Following the Queen’s death, Mike paid tribute with a moving drawing of a crying corgi with its head lowered over a crown.

He has also played an important role in supporting other members of the Royal Family.

Yesterday, he was captured placing a reassuring hand on James, Viscount Severn, 14, outside Westminster Abbey.

The Royal Family has released two poignant photo tributes to the Queen as they begin another week of mourning after a state funeral full of emotion, ceremony and symbolism that wowed and moved the world before King Charles III personally laid his mother to rest during a private burial last night. 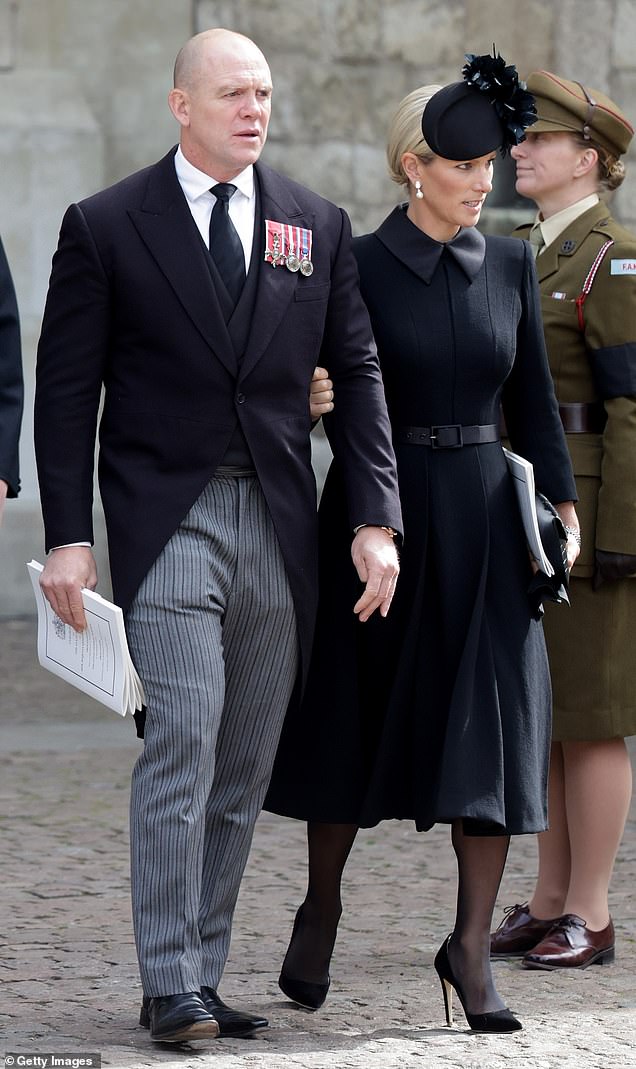 Zara Tindall (pictured with her husband Mike Tindall), Princess Beatrice and Princess Eugenie put on sombre displays as they joined senior royals at the solemn service on Monday 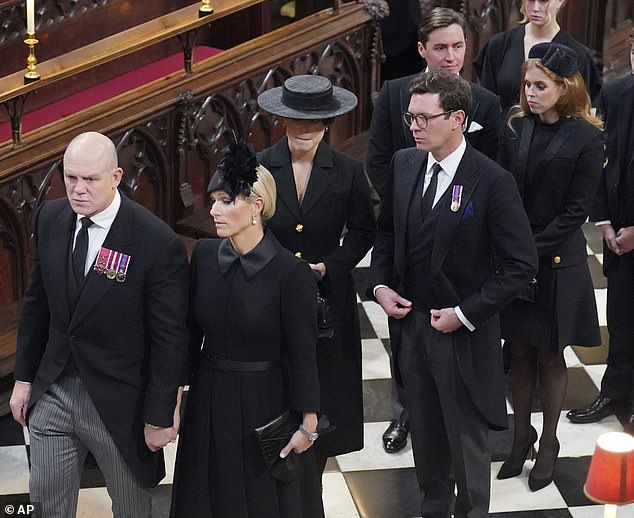 The Queen’s granddaughters were supported by their husbands Mike Tindall, Edoardo Mapelli Mozzi and Jack Brooksbank as they attended Her Majesty’s funeral at Westminster Abbey today 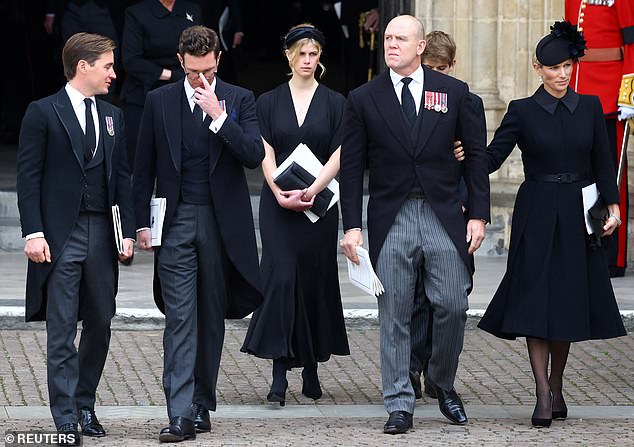 Her Majesty’s long journey to her final resting place began in Balmoral on the day of her death on September 8 and ended last night with her private interment next to Prince Philip, with the new King scattering earth on his mother’s coffin at 7.30pm.

And as she was laid to rest the royals released a a tribute titled: ‘In loving memory of Her Majesty The Queen’ and shared a never-before seen image of the late Monarch hiking through heathlands in her beloved Scotland and a smiling picture of her with her parents, sister and husband at Buckingham Palace.

The touching post issued via the Royal Family’s social media accounts also touched on King Charles III’s first address to the nation as monarch in which he quoted the Shakespeare’s immortal play Hamlet – ‘May flights of Angels sing thee to thy rest.’ 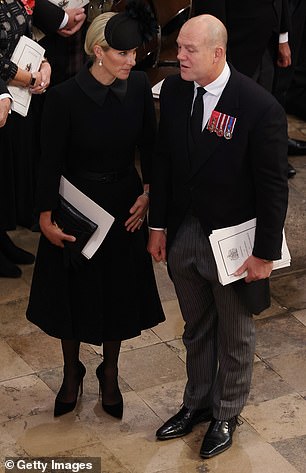 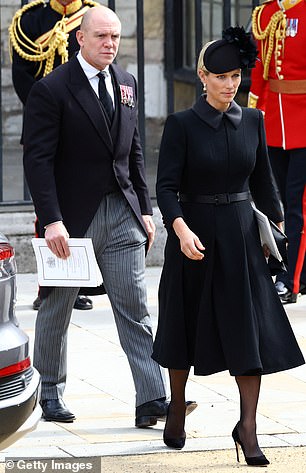 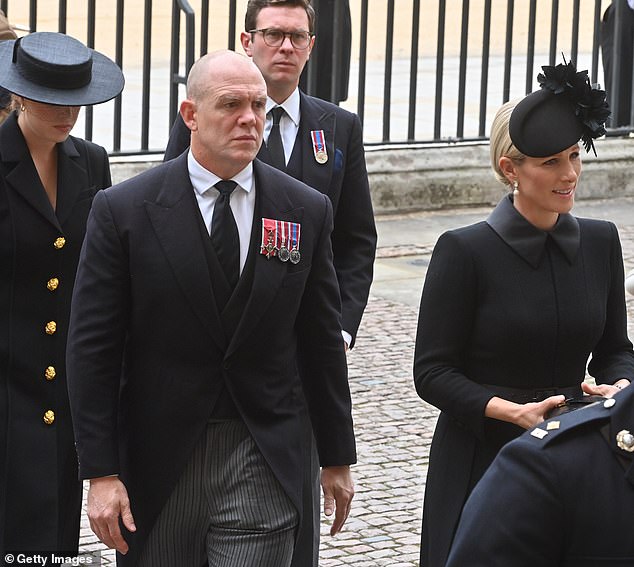 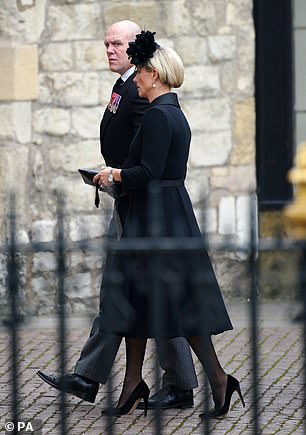 Queen Elizabeth II today lies at peace for eternity in the royal vault under St George’s Chapel with her husband, father, mother and sister.

She is the 12th British monarch to be buried at Windsor and has chosen to be with her family following the ‘Us Four’ principle pursued by her father George VI.

He told his daughter repeatedly that following the abdication of his brother, a happy and united Royal Family was the most important thing in life after the duties of a monarch.

It came after a highly-symbolic and moving public moment in which the Queen’s crown, orb and sceptre were removed from her coffin so she could descend into her grave below St George’s Chapel Windsor ‘as a simple Christian soul’. 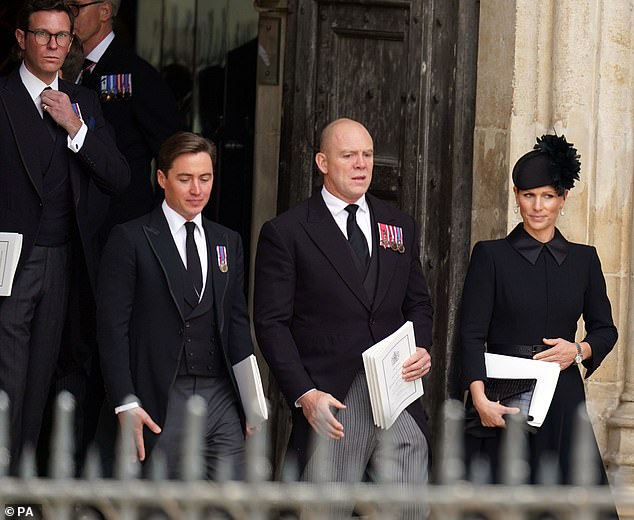 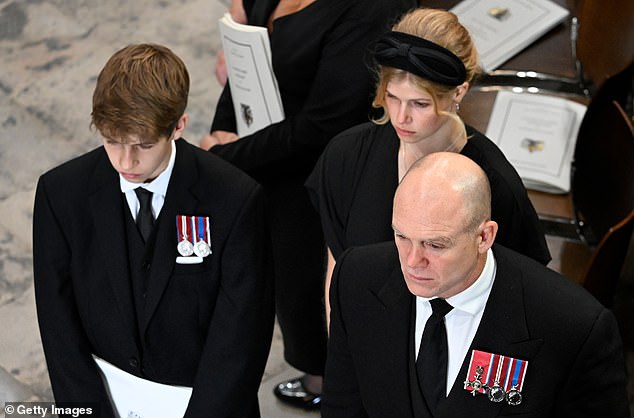 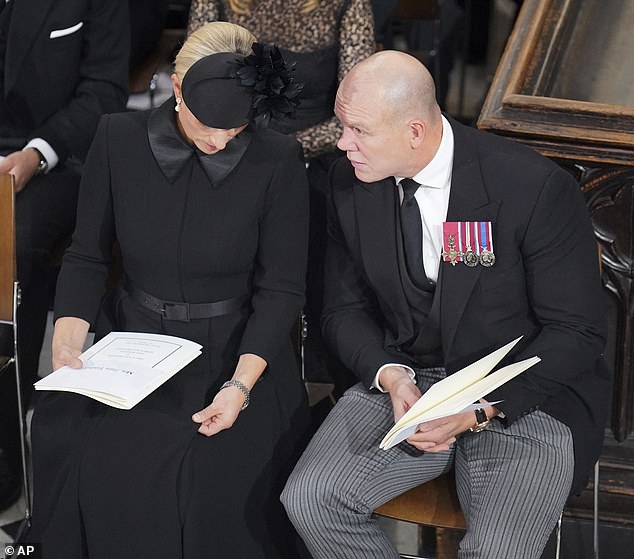 The details of last night’s private ceremony were even kept secret from most royal aides with the congregation limited to senior royals only.

It is not known if it was just the King and his siblings or whether it included grandchildren such as Prince William and Prince Harry.

has been the template of family life for the Queen in her own reign. She belonged to a happy, united family, both before and after the shock dealt to it by the abdication, and family has been the most important thing to her after her duty as monarch.

Her son decreed on September 9, the day after the Queen died following her 70-year reign, that a period of mourning would be observed until seven days after the funeral – ending next Tuesday.

It means that royals will not do any official engagements before then with Harry and Meghan expected to fly to the US as soon as possible to be reunited with their children.

Her Majesty was carried by eight soldiers from the 1st Battalion Grenadier Guards who raised and put down the Queen’s 500lb lead-lined coffin no less than 10 times on her journey from Westminster Hall to St George’s Chapel in Windsor, where she lies peacefully today.