In a banking hub full of office workers, Mr. Kwok, who died last month at 68, was a rare figure: a full-time busker with a rockabilly pompadour. He played through rain and blistering heat, and for years before and after Britain returned the territory to Chinese rule in 1997.

He was hardly the first singer in Asia to imitate Elvis, who died in 1977. But he may have been the most committed.

Mr. Kwok liked to say that he had not missed a day of busking in 28 years. He also impersonated Elvis even when he was not performing, saying that his goal was to bring the American rock ’n’ roll legend back to life.

Mr. Kwok, whose real name was Kwok Lam-sang, died on Dec. 29 in Hong Kong, said Helen Ma, the president of the local chapter of the International Elvis Presley Fan Club, which reported the death on its Facebook page this week. She said the cause was kidney failure.

Impersonating Elvis is apparently still a thing, and not only in Las Vegas, where a look-alike will walk brides down the aisle at the Graceland Wedding Chapel for $199.

In 2017, for instance, more than 20 impersonators from across the Asia Pacific region turned up in the Philippines for an “Elvis in Asia” contest. The winner won a trip to Graceland, the Presley estate in Memphis, Tenn.

And in Hong Kong, the local Elvis fan club holds regular events and has more than 2,400 Facebook followers. Mr. Kwok was one of two noted Elvis impersonators in the city of 7.5 million.

“Elvis is my savior,” he told The Times in 2010, speaking in a coffee shop before heading out for his nightly rounds.

Mr. Kwok rarely played inside venues, said Jonathan Zeman of the Lan Kwai Fong Group, a local entertainment and hospitality group. Instead, he would saunter through nightlife districts and approach people who were drinking in the street or in doorways.

“Played an Elvis song for a small group of people, made them happy, received a few dollars,” Mr. Zeman said. 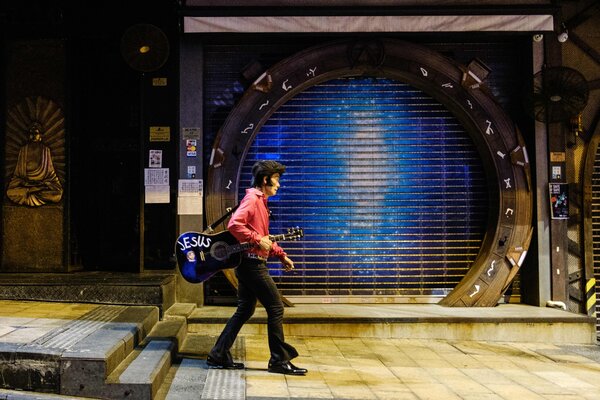 Kwok Lam-sang was born in Jakarta, the Indonesian capital, and was ethnically Chinese, Ms. Ha said. Other details about his life, including his exact date of birth and details about his parents, were not immediately available.

In 1967, a year after Mao Zedong began the Cultural Revolution, Mr. Kwok’s family moved to the southern Chinese province of Guizhou, he said in a recent interview with The South China Morning Post newspaper.

He attended high school on the mainland and moved to Hong Kong in 1974, where he worked in a factory as an electrician. He became interested in Elvis after hearing of the singer’s death and watching a documentary about him.

“I cried a long time,” he told The Times, recalling the first time he saw the film, “Elvis: That’s the Way It Is.”

Mr. Kwok won a pair of Elvis-impersonation contests in the early 1980s, The South China Morning Post reported, but local Chinese fans often mistook him for as an imitator of other famous musicians — a Beatle, say, or Michael Jackson.

By 1992, Mr. Kwok had quit his job and branded himself the “Cat King,” the Chinese moniker for Elvis. He’d also set his sights on an easier quarry: Western expatriates and tourists.

His guitar was sometimes out of tune, his self-taught English a bit rough. (His business card misspelled Presley’s first name.)

Still, he earned a living, and said that being Elvis beat factory work. Some revelers came to know him as Melvis — no relation to Relvis, an impersonator in the United States — or the “Lan Kwai Fong Elvis,” a reference to a nightlife district where he often performed.

Mr. Kwok died at the end of year in which coronavirus infections in live music venues led the government to close them for months on end, emptying the sidewalks of his potential customers. Ms. Ma said that he spent much of his pandemic downtime watching Elvis videos and playing guitar in his apartment.

Mr. Kwok is survived by his wife, Anna, and their two children, a son and a daughter.

His wife, who was also his manager, told The Times in 2010 that she had not initially supported his campaign to be Elvis. “But then I was moved by his persistence and devotion to the job,” she said.

It’s hard to find a job one loves, she added. “Now that he’s found it, I am happy to support him.”