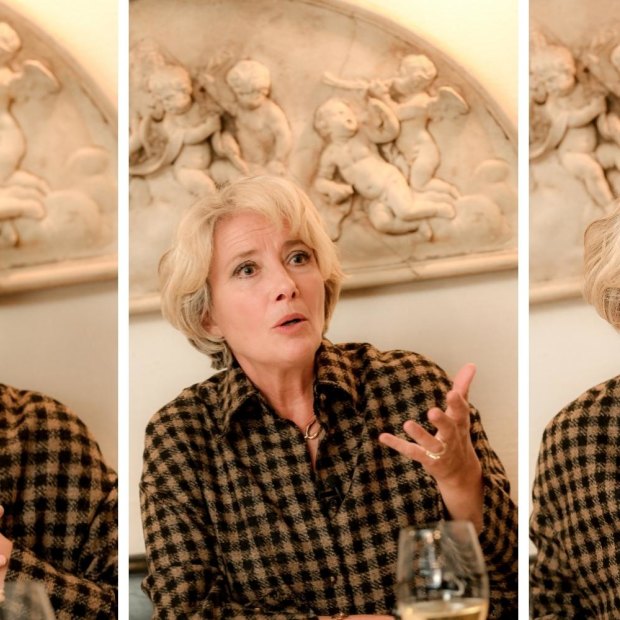 Emma Thompson in full flight at lunch with Karl Quinn at Caterina’s restaurant in Melbourne.Credit:Justin McManus

Somewhere between the carpaccio of kingfish and the squid-ink spaghetti, Emma Thompson tucks into the female orgasm.

“Women have to perform orgasms all the time,” she says. “Maybe you don’t want to make loud noises and thrash about like a f—ing electric eel.”

Her mother, and mine and yours, might have advised against discussing such matters at the dining table, but that’s just because “we’re ashamed of it, we’re deeply disrespectful about sex”, she insists. 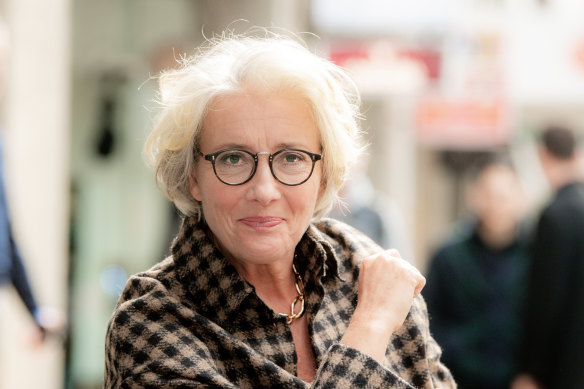 Thompson first came to Australia in the early 1980s with the Cambridge Footlights comedy revue, and her husband briefly went to school in Sydney, but this is her first visit to Melbourne. “I love it here,” she says.Credit:Justin McManus

“Here we are having a meal, and we’ll talk about the food until kingdom come, but we don’t talk about sex, or at least we don’t talk about pleasure. And I feel it’s a big mistake to cut it so entirely out of our life. I think it leads to a great deal of unhappiness, mental illness, and indeed is part of the problem of violence.”

Forthright as she is, I suspect not every meal with Dame Emma Thompson, the first and, so far, the only person to win Oscars for both acting and writing, gets so fleshy so fast. And much as I might like to think it owes something to my, ahem, stimulating company, in truth it’s been the topic du jour for the past week and a half, as she has toured the country, done endless media interviews and answered a vast range of questions at Q&A screenings to support her new film Good Luck to You, Leo Grande.

Thompson doesn’t need to traipse across the world to spruik an English indie comedy-drama, no matter how charming it is. She’s here because she thinks its Australian director, Sophie Hyde (52 Tuesdays, Animals, SBS series The Hunting), is an “extraordinary” talent who handled the intimate and very challenging material with great finesse.

“This film could have been so many different things, but I think the reason it’s doing what it’s doing is because of Sophie. She’s just so delicate.”

Thompson plays Nancy in Leo Grande, a widowed former teacher of religious education who hires a male escort to help tackle a long-standing regret: she’s never had an orgasm.

In fact, it’s just one of the many sex-related things she didn’t experience in her otherwise happy-enough marriage. But with the help of Leo (young Irish actor Daryl McCormack), she sets about tackling the list with a good deal of “will this be on the exam Miss” gusto. Tick it off, move along. 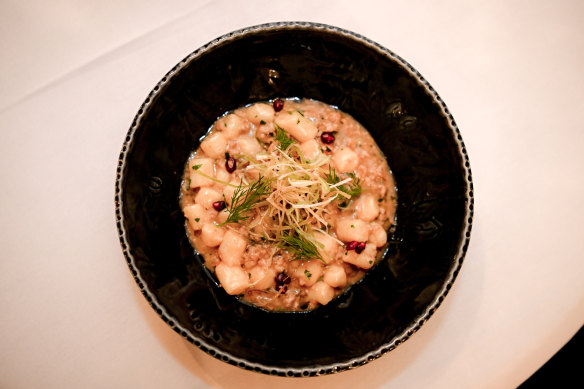 What she’s really been missing, though, is a sense of ease in her own skin, and that’s where Hyde and screenwriter Katy Brand’s body- and sex-positive arc is leading her, literally. The film ends with the 63-year-old Thompson fully naked, appraising her own body with a hard-won sense of acceptance and, yes, pleasure.

“I felt like I knew exactly who she was,” says Thompson of Nancy. “I think she’s everywhere. She’s in every woman.”

Is she even in you?

The exciting thing about acting, she says, “is playing someone who’s not like you at all. Sometimes there’s a little bit of cross-hatching, a little bit of a palimpsest, but generally the thrill is to get as far away from yourself as possible.”

Nancy is a pleaser, she says. The real Emma Thompson has more in common with the talk show host she played in the 2019 comedy Late Night, written by Mindy Kaling. “Independent, interested, a bit irritable, didn’t suffer fools, said what she meant.” 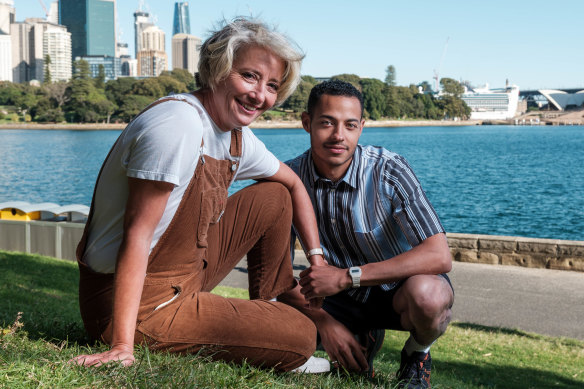 I was told by her publicist that Thompson is exactly as you’d expect, and it’s true. She’s warm, smart, fierce, funny. The discreet-but-unmissable glances from other diners reinforce the fact she’s also a bit of a legend, but her down-to-earth manner, and her earthy sense of humour, make it easy to forget that.

Our lunch date is Thompson’s last interview of a 10-day Australian tour, with just the evening’s screening to follow, and she’s ready to unwind. “I wish I didn’t have to work tonight,” she says as the first sip of a very easy-to-drink soave slides down. “I’d be here for hours.”

Even so, there’s a brief moment when I fear I’ve made a terrible mistake in booking Caterina’s for lunch. It’s not that this gorgeous cellar restaurant in the heart of Melbourne’s legal district isn’t classy enough. It’s just that it specialises in Venetian cuisine – and Thompson and her actor husband Greg Wise have an apartment in Venice, so I fear I’ve accidentally invited her on a busman’s holiday.

But the second she takes her first bite of the baccala – a creamy codfish spread atop a perfectly toasted oval of bread – any chance of that evaporates. “Oh my God, that’s so good,” she says, her whole face squinting in delight. “They’ve got that so right. That’s made me very happy.” 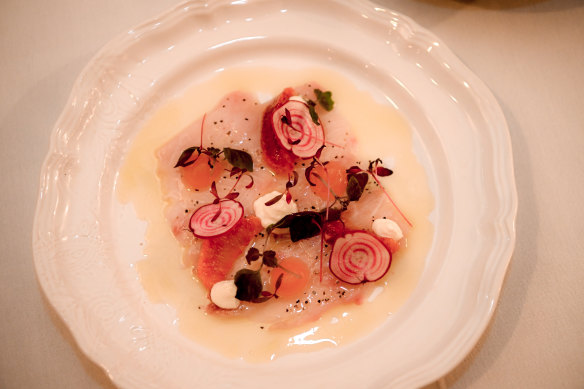 Thompson doesn’t like fussiness, but she does love food. My entree of gnocchi with a white ragu of pork neck, fennel and leek has her reaching over for a forkful, then later another spoonful, and as our host weaves her hospo magic over us, it’s clear there are two stars in the room. “She’s amazing, Caterina. She’s super cool,” Thompson observes. “She’s someone who can really do this, who knows food and knows how to inhabit it but also make it feel light-hearted.”

Thompson’s daughter Gaia is 22 and studying drama, but she’s also a very good cook. “And I keep saying, ‘I know you like acting, but, you know, perhaps running a restaurant can be as exciting’. There’s something very theatrical about restaurants; when you get it right, you feel so happy and lucky to be in it.” 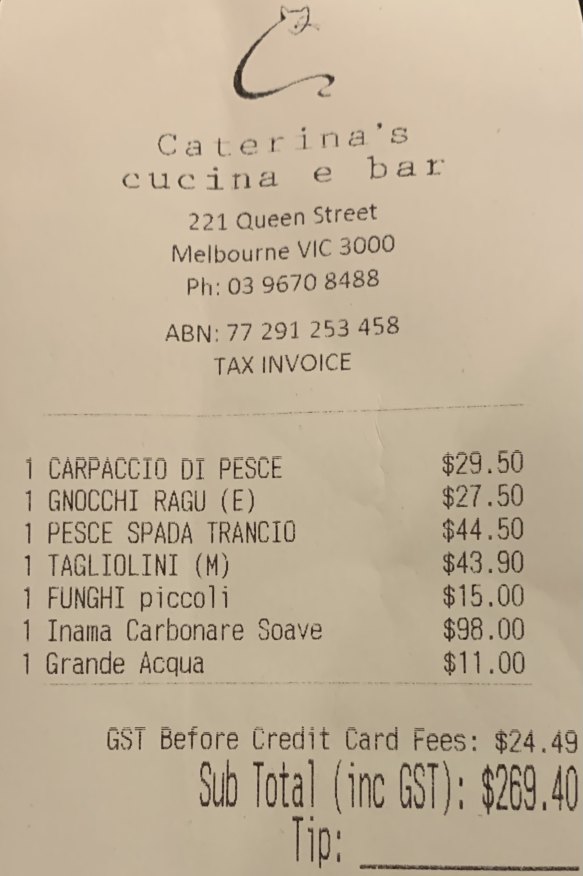 For sure. But there’s something theatrical about … well, the theatre and film and television too, right?

“Yeah, you’re absolutely right. I love my job so much, I’m so lucky to keep being given opportunities to do it. And I’m just about to go back and do theatre.”

She’s been working on the stage musical adaptation of her 2005 film Nanny McPhee for about five years now, and can finally see what looks like the finishing line. “I think it’s about 18 months away,” she says. “I’ve done many, many drafts. The composer, Gary Clark, has written many, many songs.”

She gave him just two musical reference points: English cabaret rock band The Tiger Lillies and Tom Waits’ album SwordfishTrombones. “A sort of steampunk Victoriana, that’s what we’re going for,” she says. “Something really muscly and dark and a little bit sinister in that way that makes children very happy.” 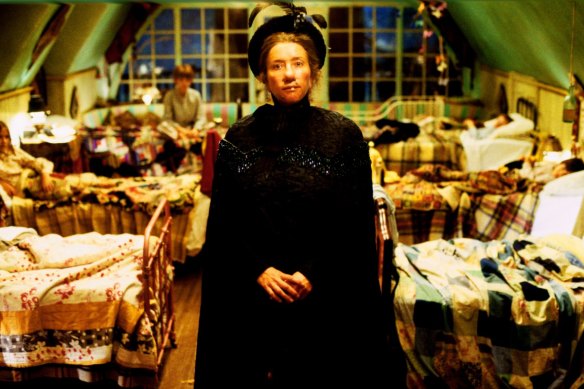 Thompson has been developing Nanny McPhee for the stage for about five years, and hopes it will be ready in another 18 months.

With acting credits in more than 90 films and series and writing credits on seven movies – including the Oscar-winning Sense and Sensibility, Nanny McPhee and its sequel, Bridget Jones’s Baby and Last Christmas – I wonder what it is that makes her most happy, career-wise.

“Acting is more fun,” she says. “You get energy from other people, whereas [with] writing you’re on your own. But I would say my favourites are the ones I’ve written. Because if you’ve started with a blank piece of paper and you’ve ended up in the Curzon [an English cinema chain] it’s just such a journey.

“You can’t really fathom it, but the satisfaction, the sense of purpose for starters, and then disbelief when it actually happens, is so enormous that the pleasure is out of all proportion to any other experience.”

Better than sex even?

“Different,” she says. “It lasts longer. I’m sure there’s other very good gags to be had out of this analogy, but right now I’m pissed, so I’m struggling to think of them.”

As much as it’s the sex, and her nudity, that have grabbed the headlines, Leo Grande isn’t just about that. “It’s mostly words,” she says. “The really confronting thing was doing 12 to 15 pages of dialogue a day, so getting your kit off and standing in front of a mirror is quite easy after that.”

The nude scene was filmed at the end of the rapid-fire 19-day shoot, and she concedes it was quite confronting, “because I had made a very conscious decision to use my own body as it is, rather than preparing it in any way to make it fit an expectation that people might have”.

That fits both with the theme of the movie and with her take on the beauty myth, which she sees, per Naomi Wolf, as an oppressive tool that emerged in response to women’s emancipation. “As soon as women got the vote and started to earn money, everyone told them they should be smaller, thinner, take up less space,” she says. “Why not spend all your time and energy thinking about what’s wrong with your body, and spending money on ways to alter it?”

Leo Grande won’t upend that construct on its own, but it might help a few people think differently about their bodies, about sex, and indeed about sex work. It might open up a space in which some people might be able to acknowledge that being a parent isn’t always the greatest gift, that fear is such a stifling force, that marriage can be hard work but still worthwhile. 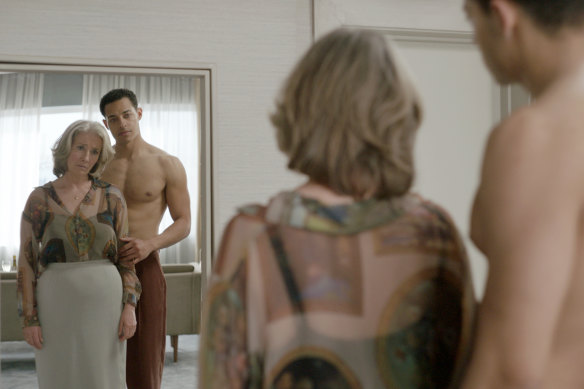 Nancy doesn’t much like her body at the start of her four meetings with sex worker Leo Grande, but by the end is able to accept and even appreciate it in its full naked glory.

“I always think that phrase ‘failed marriage’ is so cruel,” says Thompson, whose first to Kenneth Branagh lasted six years but whose second, to Greg Wise, is 27 years and counting. “We seem to think of it as some kind of achievable state, which is a bit unfair. Relationships have their time, don’t they, and then they come to an end.”

So, too, do lunches, and after submitting cheerily to a few selfies she’s off for a post-prandial nap before the evening’s screening. After a couple of days to herself, it’ll be back to England and whatever comes next.

Goodbye and good luck to you, Emma Thompson. It’s been a pleasure – no faking.

Good Luck to You, Leo Grande is in cinemas from August 18.