There might be a terrifying new monster on the loose in Hawkins, Indiana, but the most exciting part of the Stranger Things Season 3 trailer is the budding friendship between Max and Eleven. After all, there’s no better way to face down a supernatural monster from the Upside Down than with a good pal by your side.

Though there are still obviously plenty of threats from the Upside Down that the show’s characters need to face — not to mention the scientists at the Hawkins Laboratory — the Season 3 trailer implies that Eleven (Millie Bobby Brown) is focusing on setting down roots and attempting to build a normal life in Hawkins. And that includes hanging out with Max (Sadie Sink), who was introduced in Season 2 of Stranger Things and quickly became a key part of the crew after winning over the boys with her video game skills and comfort on a skateboard. While Eleven has been able to rely on the boys for safety and support ever since she arrived in town, her growing closeness to Max helps solidify the fact that she’s clearly here to stay, no matter what kind of supernatural elements are headed her way.

In the new trailer, Max and Eleven get up to some very normal teen girl activities: dancing around a bedroom while singing into hairbrushes, eating ice cream cones, and rocking some pretty incredible ’80s outfits. The clip even shows Max and Eleven running around the new Starcourt Mall together, immediately followed by Eleven’s adoptive father, Chief Hopper (David Harbour) telling someone that it’s "important to me that you feel safe here." While there’s no doubt that there will be plenty of drama in the upcoming episodes, it seems as if a major theme of Season 3 will be Eleven finally feeling like a normal girl, rather than a brutal science experiment.

Though there was some tension between the duo last season, Max and Eleven’s friendship is something that star Sadie Sink has been hoping for since filming on Season 2 wrapped last year. "I’d love to see some girl power, maybe like Max, Eleven, and Nancy all team up or something like that. That’d be pretty cool," Sink told Bustle back in December 2017. "I think Eleven and Max could make a really good team."

The trailer’s hints at a growing friendship should shut down any worries that fans might have had about Stranger Things pitting its two young, female characters against each other. In their one Season 2 scene together — which, naturally, featured all of the boys in the Dungeons and Dragons crew as well — Eleven pushes Max off her skateboard, as if to underline the idea that they were fighting for the "girl spot" in the group. By contrast, the trailer for Season 3 shows Max and Eleven hanging out alone together multiple times, implying the importance of the girls being able to bond with one another away from the boys.

"[I want to] have more scenes with Millie," Sink told Bustle in 2017 about her hopes for a potential friendship between the characters. "[Millie and I] would still hang out on set, but at the same time I want Eleven and Max to have their friendship. I don’t want to be left off of that, so I’m hoping that’s resolved." 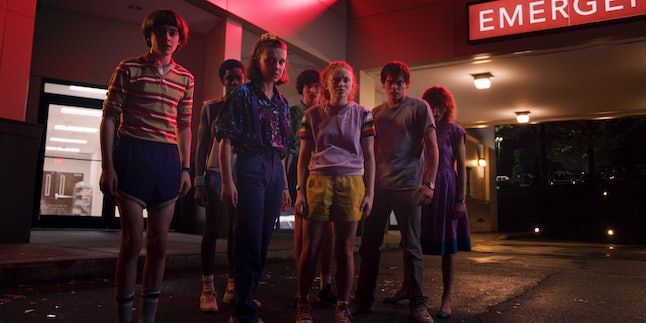 During Season 2, Stranger Things established Max as a powerful, strong character in her own right, as brave and interesting as Eleven, even though she lacked powers. Now that Max has proven that she can take down the biggest bully in her life — her monstrous stepbrother, Billy — having her by Eleven’s side makes any of the latter’s potential fights even more dangerous.

So while sure, there might be plenty of terrifying things coming from the Upside Down that’ll attempt to upend her new, happy life, it’s clear that Eleven has one more person by her side who’s willing to protect her against all threats — human and supernatural. Hopefully, Season 3 of Stranger Things will feature even more adorable moments of female friendship between Max and Eleven when it premieres on July 4.