‘Full House’ Stars: Then and Now!

The YouTube creator, 22, unveiled her new look via Instagram on Tuesday, April 5, sharing a series of bikini selfies on social media. Giannulli also included a screenshot of a text she sent her mother, 57, showing off her fiery new hair color. In response, Loughlin simply shared a screenshot from an episode of Full House, in which her character, Aunt Becky, rocks a similar shade of red.

“Well, that’s a bit creepy, now, isn’t it? Haha!” Giannulli wrote back to her mom. 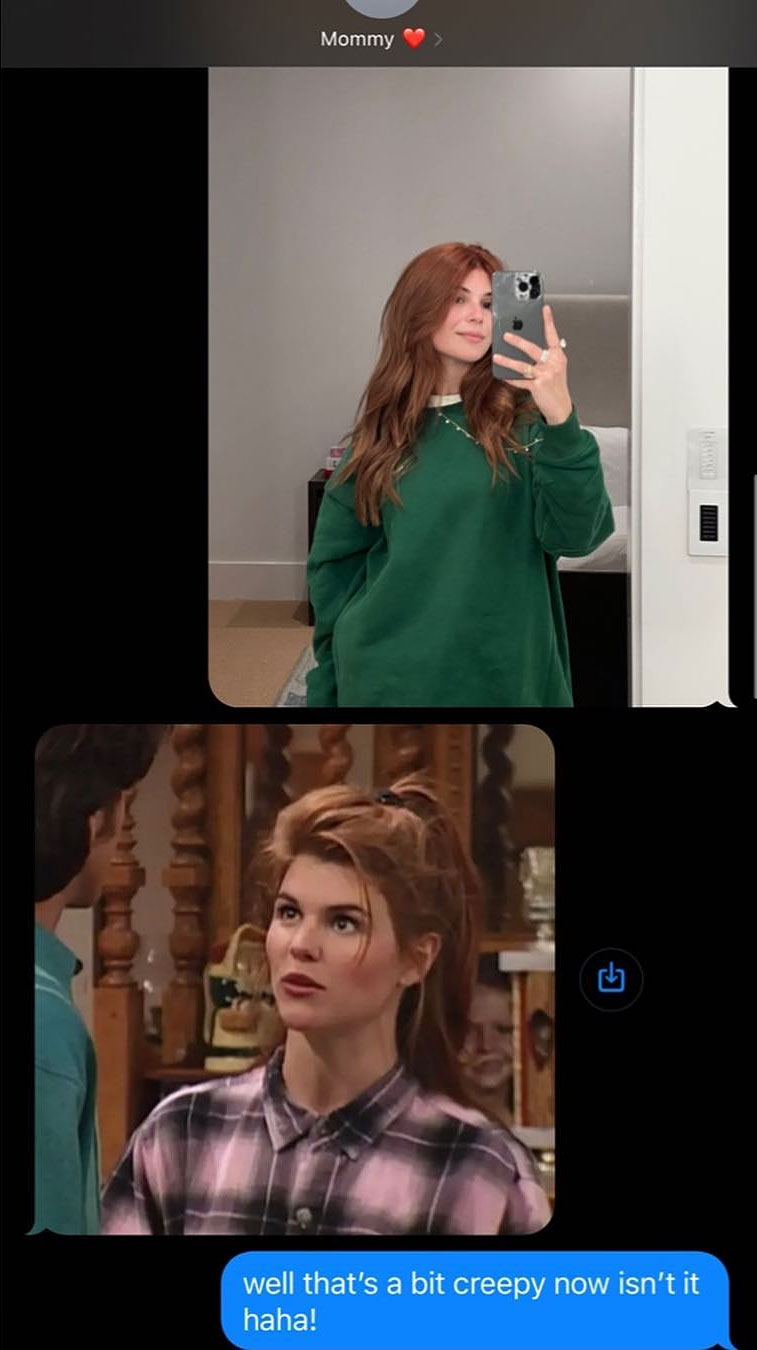 The Dancing with the Stars alum became a household name after Loughlin and her husband, Mossimo Giannulli, pleaded guilty in May 2020 to fraud charges after being accused of paying bribes to ensure their daughters got into the University of Southern California. The couple also share Bella, 23.

Everything Olivia Jade Has Said About Moving On From Admissions Scandal

The When Calls the Heart alum served two months in prison, while Mossimo, 58, served five months.

“I feel like a huge part of having privilege is not knowing you have privilege, and so when it was happening, it didn’t feel wrong,” Giannulli said during an appearance on Red Table Talk in December 2020. “I also felt very misunderstood. The picture that has been painted of me, I feel like, is not who I am. I’m not this bratty girl that doesn’t want to change anything. Also, I understand why people are angry and understand why people say hurtful things and I would too if I wasn’t in my boat.”

She continued: “I took my privilege and all my blessings for granted, and I never thought anything of it.”

Though she previously stated that there was “no excuse” for her parents’ actions, Giannulli still found herself wanting to defend her mother from the public shame the family endured. “Even though I also was getting dragged negatively, it didn’t nearly affect me as much as seeing mom having all this thrown on her,” the beauty guru confessed during a November 2021 episode of the “Conversations with Olivia Jade” podcast. “She really took this whole thing on her back, solely. There are a lot of people that were in this case, and a lot of other parents, and I do not know one other person’s name.”

The College Admissions Scandal: Where Are They Now?

Describing Loughlin as “the most incredible mother in the world,” Giannulli added that the mean comments about her family affected her more than the attacks she received: “I think it’s interesting that when I would read stuff about myself … it didn’t nearly affect me the same way if I read it about our own mom.”