Chris Carmack and his wife, Erin Slaver, are giving fans an intimate look into their relationship with their band, Life on Eris’, new lyric video.

Life On Eris, the musical duo that consists of actor Chris Carmack and his wife, Erin Slaver, is EXCLUSIVELY premiering the lyric video for their new song, “The Risk,” with HollywoodLife! The couple shot and edited the video themselves, and it features sweet moments between them in their backyard in Los Angeles. Chris and Erin share a few kisses and smiles throughout the intimate footage, with the lyrics to the song flashing in the background.

“Our lyric video was meant to capture a moment of contemplativeness and hesitation in the early stages of a new relationship — the places our minds go when we are questioning every interaction,” Erin explained. “The black-and-white footage (shot in slow motion) gives the video a feel of surrealism; the sometimes unconscious thoughts that run through our mind, creating fears, and fantasies, we can’t always put into words.” 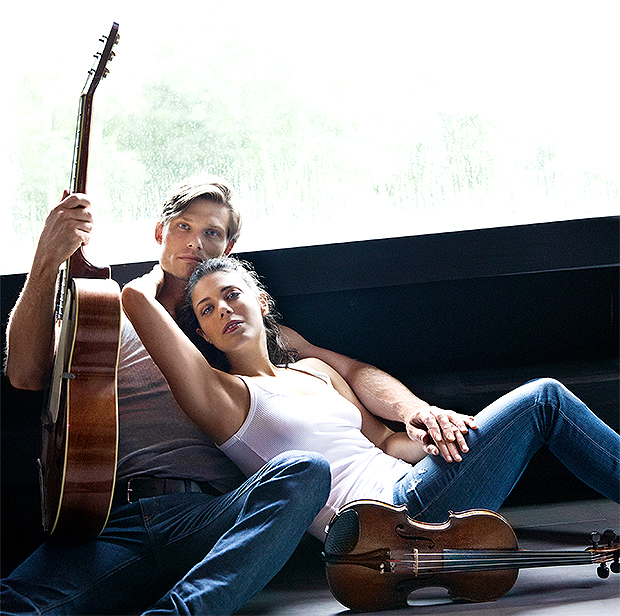 “The Risk” tells the story of a new relationship, which Chris and Erin wanted to capture in the lyric video (even though they, themselves, have been married for two and a half years). “Time stretches in those moments, so slow-mo seemed like the best and most romantic way to tell the story,” Chris told us. “I don’t think we remember the specifics of these moments as much as we remember the way we were feeling at the time, so the black-and-white visuals were chosen to enhance the nostalgia.”

Chris and Erin met while filming Nashville in 2016, and tied the knot in Oct. 2018. They formed Life On Eris to combine their musical talents, and released their Stonewall EP in 2020. Now, “The Risk” is their next foray into music.

“The lighthearted nature and production of “The Risk” takes us back to an earlier, more carefree time in our relationship; before we took on the responsibilities of starting a family and the realities of married life,” Erin admitted. “However, its message also reflects the pandemic, as the ‘risk factor’ seems high these days just walking out of your front door. The song’s lyrics are rooted in the memories Chris and I shared during our first few dates.”

Chris added, “”The Risk” came out of our need to write and share a lighthearted, happy song that could garner a few smiles from us and our fans. We didn’t overthink production, we just played our instruments and sang. It was not surprising that it came out sounding more like the country music we were making as individuals before we started our band.” Check out the lyric video above!