Prime Minister Scott Morrison has suggested the public service was the source of a leak that revealed he and senior ministers rejected a push to almost double its Pacific aid funding, pointing out that cabinet’s national security committee is also “attended by officials”.

The Australian on Friday reported the national security committee knocked back a push last November by Foreign Minister Marise Payne for Australia to increase its Pacific aid budget from $1.44 billion a year to about $2.88 billion a year by 2025-26. 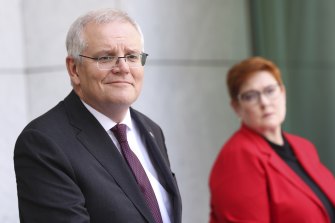 Scott Morrison says he would not confirm whether the leak about Marise Payne’s submission was correct.Credit:SMH

The funding proposal, prepared by the Department of Foreign Affairs and Trade, had been rumoured for months but this was the first confirmation of exact details including the cost and the fact that it had been formally rejected.

The Sydney Morning Herald and The Age have confirmed that a proposal was put forward, but the total funding amount was less than $2.88 billion. Parts of the submission, such as more than $300 million in temporary COVID-19 measures, were later adopted.

Asked on Friday in Perth why members of his own government were leaking against him, Morrison said he “rejected” the accusation “100 per cent”.

Pressed on whether that meant DFAT was the source of the leak, as suggested by several of his MPs to this masthead, Morrison said he “will not speculate on these issues”. He then said he would not confirm whether the report was correct.

“I’m not confirming these matters have been discussed,” he said.

“I’m not even confirming the matters have been discussed. You could have a completely false report.”

Asked whether he would investigate the leak, Morrison said: “I’m not even confirming there’s a leak”.

“So you shouldn’t jump to conclusions about these things,” he said. “I know what the reports are, but I don’t discuss national security matters.”

The leak comes after the Morrison government failed to convince Solomon Islands not to sign a security agreement with China, which Australia fears could lead to Beijing establishing a permanent military presence in the near-region.

It also follows a scathing editorial in The Sydney Morning Herald on Wednesday that called for Morrison to remove Payne from the foreign affairs portfolio if he wins the election.

One Liberal MP, who spoke on the condition of anonymity, said “it would not surprise” them if the leak did come from DFAT.

“They would know the submission that went into NSC and what the decision was. Having put in the submission and failed, someone may have their nose out of joint,” the MP said.

“I would not anticipate that Marise or anyone associated with her would allow such a potentially damaging leak at this stage of the campaign.”