Labor’s landmark climate change legislation, which would create a legally binding target for the first time in Australia to cut greenhouse emissions by 43 per cent by 2030, has passed the lower house.

The Climate Change Bill was passed 89 to 55, with the backing of the Greens and most crossbenchers. 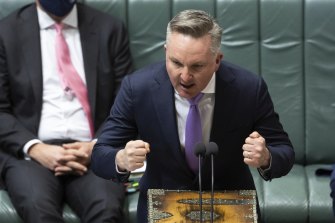 “This is a good day for our country,” Climate Change Minister Chris Bowen told parliament.

The bill is now set to hit the Senate next month, where the minor party has promised it will back the legislation. Labor will also need the support from a crossbench senator, which is expected to come from independent David Pocock.

Bowen gave some ground last week to help win Greens’ support for the climate bill by making it clear that legislating a 43 per cent target would not prevent later decisions to make deeper cuts.

Confirming on Wednesday the Greens would vote for the government bill after weeks of speculation, party leader Adam Bandt flagged that the agreement on the climate bill was only “round one” because he would keep pushing to halt new coal and gas projects and to include tougher rules in environment law to reduce carbon emissions.

The Coalition refused to vote for the Labor bill and has set out plans for a nuclear energy policy instead, while signalling it might commit to deeper emission cuts than the target it had in government – a cut of 26 to 28 per cent by 2030.

The lower house on Thursday adopted a slate of amendments from the teal independent MPs, which they said would boost the role of science in setting greenhouse emissions reduction targets.

One amendment made it explicit the 43 per cent target was a floor rather than a ceiling. Others added requirements that the impacts on regional communities be taken into account and that future updates to targets under the Paris Agreement must draw on expert advice from the Climate Change Authority.

Separate bids from the Greens and independent Andrew Wilkie to lift the emissions cuts to 75 per cent were defeated.

Bandt urged the government to “act quicker to fix it” after the Coalition’s inertia.

“We’re doing this to stop going over a cliff,” he said. “If we hit two degrees, say goodbye to the Great Barrier Reef, and parts of Australia may become inhabitable if we go beyond that.”

In the final vote, the overwhelming support for the bill came from Labor, the four Greens MPs and crossbenchers Daniel, Ryan, Scamps, Rebekha Sharkie, Spender, Steggall, Tink and Wilkie.

Chaney and Haines were absent because they caught COVID-19 earlier in the week.