It's said you should keep your dreams to yourself. You'd also be wise not to share a cover of the Fleetwood Mac classic outside the shower or, at best, in a karaoke bar with your most forgiving friends.

Khalid may love the song dearly, but in the hands of a mumble-crooner who barely moves his lips Dreams becomes almost frightful. 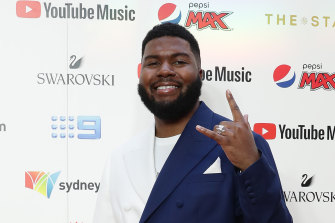 Khalid in Sydney for the Arias and two Sydney shows.Credit:Getty

Sure, this is a complaint from someone at least half a generation older than the Spotify sensation and his target audience, but the soulful 21-year-old R&B singer-songwriter was on much safer ground with his own material. He needn’t go mining his grandparents’ record collection.

The double whammy of 8TEEN and Twenty One at the start of the set resonate far better because they speak to everyday experiences of being young. This powered the stunning success of breakthrough album American Teen and this year’s follow-up Free Spirit.

As with many young artists, Khalid defies easy categorisation: there’s a blend of R&B, hip hop, soul, outright pop and occasional rocking guitar licks that can produce beautiful results and at times turn to a kind of sonic mush. Even the dancers combine hip hop moves with balletic pirouettes.

There were a few lulls in a set that boasted 29 tracks, but plenty of highlights, too. The best through the middle included the lovelorn Bluffin’, a soaring version of Vertigo and the seductive grooves of Better – the last two coming from last year’s Suncity EP.

The night reached a higher gear thanks to debut single Location. The viral sensation that put Khalid Donnel Robinson on the map is all about sharing a pin on an app, but like any great pop song is also about much more. Connection, sex, longing, trying to be human in this increasingly technological world.

The home stretch was the night’s strongest. After Location came the Marshmello collaboration Silence, probably the night’s biggest banger, and Another Sad Love Song, which sounded anything but as Khalid was at his most playful. The smash hit Young, Dumb & Broke might have been overplayed in the past few years, but with energised delivery to enthusiastic fans it serves as a reminder of just how fresh a breath of air Khalid's arrival has been.

Keep dreaming, Khalid, but leave the mumbled mangling to Fleetwood Mac to someone else.