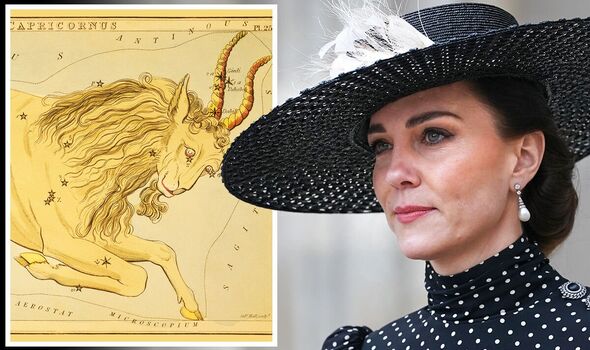 Kate Middleton was born on January 9, 1982, exactly 41 years ago today. This makes her a Capricorn – but what are the Princess of Wales’ zodiac traits?

Inbaal Honigman, a celebrity psychic and astrologer, spoke exclusively to explain the advantages Kate will have as a Capricorn when she becomes Queen Consort.

She claimed: “Capricorn is an Earth sign, like Taurus and Virgo. All three Earth signs are concerned with the practical side of life – work, home and family.

“They’re not frivolous signs, in fact preferring to be predictable and safe. Earth signs like to eat well and exercise and are known for being sensible, even a little bit boring at times.

“Capricorns are serious and steadfast. They go to great lengths to complete any job and don’t lose their focus.

“Normally Capricorns like to plough their own furrow, run their own business and even build their own home from scratch. They’ll blend baby food, change light bulbs, there’s nothing they can’t turn their hand to.

“As a Queen in waiting, Kate will focus on her duties without any scandal or distractions, which comes very easily to a Capricorn, as they enjoy routine.

“Raising her children and having a stable family life is a joy for this star sign, as Earth signs love creating routines for their little troop and dressing them in matching outfits. When shopping, Capricorns enjoy artisanal items, and would rather own fewer pieces, if each of them is unique and quality-made.”

However, according to the expert, being a Capricorn may have its disadvantages when Kate’s husband takes the throne.

Inbaal explained: “Capricorns are committed to doing the right thing. They don’t lie or cheat, and they won’t turn a blind eye to injustice.

“Therefore, a Capricorn like the Princess can come across as very blunt, because they feel no obligation to explain themselves.

“The truth is always the truth, justice is always justice. There are no excuses. Some people don’t like the blunt approach because they prefer a softer way of communicating, but a Capricorn’s no-nonsense way doesn’t display annoyance, just efficiency.

“Despite being a very mainstream sign, they also have an individualistic streak, because a Capricorn doesn’t like to take orders.

“As Queen Consort, Kate is likely to advocate for a more modern royal family, with equal rights and obligations for male and female heirs, and she will support more charities that are close to her heart, even if traditionally they weren’t seen as charities of interest to the royal family.”

Inbaal explained whether Kate is an easy person to get along with in the wider Royal Family as a Capricorn.

She opined: “As a Capricorn member of the wider Royal Family, Kate’s no-nonsense approach might not be to everyone’s tastes.

“Some people like to please, but a Capricorn just likes to get on with it. They hate gossip and idleness, and so she’ll get on great with other sensible parties, but may draw the ire of those who enjoy drama.”

The expert elaborated on whether Kate has the qualities to appear as likeable and relatable to the public as the late Princess Diana did.

Inbaal suggested: “Kate shares a very moving link with her husband, Prince William, and his mother, the late Princess Diana. Both William and Diana are Cancerians. A sign that is immensely family-minded, sensitive and caring. In fact, William’s sun sign and moon sign are both Cancers, which is why he comes across as so caring, even when he just offers a quick handshake, and is also why he appears to be such a doting father.

“Double Cancer bestows many beautiful traits on a man, such as devotion to family and an appreciation of traditions. Behind closed doors, Kate has some Cancerian qualities as well, because she has her moon in Cancer. So even though her personality externally is very practical and poised, as befitting a Capricorn, her personality internally is very charitable and sympathetic, due to her Cancer moon sign.

“She will be loved by the public and will be seen as likeable and relatable, albeit in a more 21-century, spirited way, due to the Capricorn/ Cancer combination.”