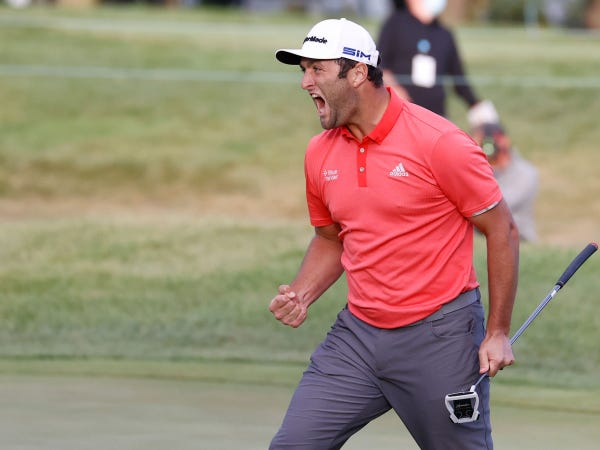 Jon Rahm narrowly avoided disaster on Sunday, sinking a 66-foot birdie putt on the first playoff hole of the BMW Championship to outlast Dustin Johnson and take home the trophy.

While his title-winning putt would be the story of the final round, Rahm's whirlwind weekend started with a major hiccup on Saturday, when on the fifth green, he picked up his ball without marking it. Rahm was aware of his bone-headed blunder the moment it happened and called over a rules official.

Despite his penalty, Rahm saved bogey on the hole and finished his round on Saturday with a four-under 66 — the lowest score any player would post that day.

"We don't see those on the PGA Tour, and usually, it's not followed by a 66 on this golf course," Rahm said of his mental lapse after the round. "I just hope I don't lose by one. I'm just going to say that. And if I do, well, it's very well my fault. It's as simple as that."

Rahm's words almost came back to haunt him. On Sunday, Rahm charged up the leaderboard, finishing the day with a bogey-free 64, with Dustin Johnson, the only man with a chance to catch him. Johnson sunk a miraculous double-breaking birdie putt from 43 feet away to force a playoff on his final hole of the tournament.

It would have gone down as the shot of the tournament, if not for what happened next.

After both players reached the green in two on the playoff's first hole, Rahm was left with 66 feet to the hole, while Johnson had a look at a 30-footer for his potential birdie.

As Rahm planned out the course of his shot, one NBC commentator claimed that the Spaniard was staring down the "toughest two-putt of his life."

But Rahm only needed one, threading the needle to sink his ball in the dead-center of the cup. The putt was so astounding that Rahm's reaction felt delayed — he didn't know it had a chance until it made the final turn home.

Johnson would give his birdie putt a good run but could not match Rahm's ridiculous shot, leaving Rahm the winner of the BMW Championship, and it's $1.7 million top prize.

After his win, Rahm actually credited his mistake for giving him the drive to win the tournament.

"I was like, 'That extra shot cushion would be extremely nice right now, I'm not going to lie,'" Rahm said. "But at the same time, it happened. And I don't know if I would have won had it not happened.

"It kind of made me mad at myself, and I just went on with my focus after that and was able to play amazing golf and stayed aggressive. I can tell you that after that two-putt, making that 6-footer for bogey, I was like, 'OK, that's it. No more playing around, let's go.' That's kind of what mentally did it for me."

For Rahm, it was his second win in his past five starts, moving into second place in the FedEx Cup standings heading into the Tour Championship next weekend. If he can take home the top prize one more time, it'll come with a $15 million payday.