The state of the jobs market in the coming months will be key to any decision to extend higher dole payments into 2021 as the government comes under pressure to ensure unemployed and disabled people don't bear the brunt of the economic downturn.

Families and Social Services Minister Anne Ruston said on Monday elevated JobSeeker payments would not be cut back if they were still needed next year amid growing support from community and business groups for a permanent rise to help more than 1.6 million people through the worst recession in about 90 years. 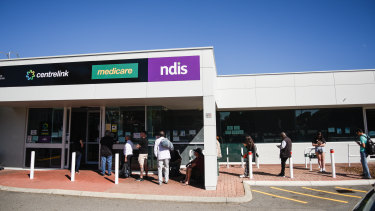 The higher dole could be extended if the economy doesn’t improve.Credit:Marta Pascual Juanola

The $565.70-a-fortnight JobSeeker benefit was boosted by a $550-a-fortnight coronavirus supplement at the height of the crisis but the supplement will fall to $250 a fortnight this week until December 31.

Senator Ruston estimated on Monday that 30,000 people would see a reduction in their income support within days because the government was restoring the assets test on the JobSeeker payment.

The test was waived for JobSeeker, Youth Allowance, the Parenting Payment, Austudy and Abstudy but will resume on Thursday. In one example of the assets test, single people who do not own their own homes lose income support if they have $482,500 in assets.

The October 6 federal budget won’t include a decision on the JobSeeker rate beyond 2020. Senator Ruston said the government would consider how economic conditions improved towards the end of the year as Victoria came out of lockdown before deciding whether to continue the supplement.

"We'll continue to monitor over the coming weeks and months the economic conditions that exist, particularly in the job market, and we'll be making further announcements about any further temporary measures … [when] that information is available to us," she said.

Australian Bureau of Statistics data last week suggested a turnaround in the jobs market, with the unemployment rate dropping to 6.8 per cent in August from 7.5 per cent in July. But the fall was driven almost entirely by a surge of sole traders in the gig economy.

The Business Council of Australia has proposed an increase in the JobSeeker base rate to at least $708 a fortnight while the Australian Council of Social Service has called for a permanent increase and Deloitte has warned reducing the supplement will harm the economic recovery and employment.

Pressure is also building on the federal government to give extra financial help to 1 million disabled pensioners and carers who missed out on their regular six-monthly pension rise this week for the first time in 23 years due to a drop in costs on the index it is measured against.

The ABS' pensioner and beneficiary living costs index showed transport expenses fell 8.7 per cent between the March and June quarters while education was down 4.6 per cent and furnishings and household equipment 3.5 per cent. Overall, costs reduced 1.4 per cent. Food and non-alcoholic beverages, alcohol and tobacco and clothing and footwear costs all rose.

The government has committed to more help for older Australians by boosting the age pension in the October budget but Labor's spokeswoman for families and social services, Linda Burney, raised concerns about those on disability and carers' payments.

"These aren't ordinary times," Ms Burney said. "For many people with disability and carers, costs are higher at the moment – things like higher energy bills from staying at home, extra transport costs from avoiding public transport, grocery home delivery charges, missing out on shopping at the markets for specials, and extra health costs."

There are 754,000 disability support pensioners and 295,000 carer payment recipients across the country, including almost 350,000 in NSW and about 256,000 in Victoria. Those aged 21 or over receive a maximum basic rate of $860.60 a fortnight for singles, with additional help available for bills, medicine, communications and energy.

People with Disability Australia spokesman El Gibbs said it was disappointing there might not be an increase as surveys showed pandemic-specific costs, including healthcare, had increased for households receiving these payments.

Senator Ruston said the current method of indexation required the rate to be determined using both inflation and a second cost-of-living measure, which went backwards due to the effects of the virus.

"However, the government recognises our pensioners have faced hardships during this pandemic which is why we have already made two $750 payments to them and have committed to providing further, additional support in the budget," she said.

Lobby groups such as Carers NSW and Council on The Ageing are calling for extra support through another round of $750 stimulus cheques. Two rounds of $750 payments have been made to eligible households, in March and July.