This week the 2022 Archibald Prize kicked off its regional tour at Bunjil Place in Narre Warren, and for Victorians this is the only local opportunity to see the finalists and winning entries up close.

Every year, when the Archibald Prize is announced, there is a flurry of furious conversation and debate. We all have our favourites and opinions about which works are the best, the worst, the most deserving or the most exciting. 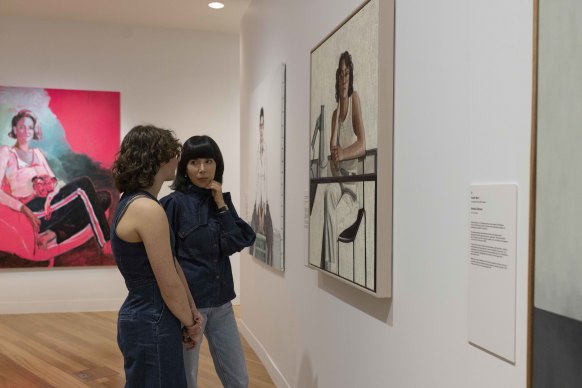 Ella Simons and Yvette Coppersmith at the 2022 Archibald Prize exhibition at Bunjil Place. In the background is the work Brooke and Jimmy by Laura Jones.Credit:Andy Chappell

The contest calls for portraits “preferentially of some man or woman distinguished in art, letters, science or politics, painted by any artist resident in Australasia”, which means that in addition to the skill of the artists, there’s the potential to see public figures in a different kind of light. It’s the perfect storm of celebrity, artistic talent and, often, social commentary.

Finalists start popping up on websites, in magazines, in newspapers, on social media. In between all the discussion, it becomes easy to forget that many of us haven’t actually seen the portraits in the way that the artists intended: in person.

“As an American who moved here 10 years ago I was really struck by just how popular the Archibald Prize is,” says Kim Leutwyler. The artist has been a finalist in the prize six times. In 2022, they were a finalist for their work Courtney and Shane, a bright and energetic portrait of Courtney Act and Shane Jenek, “who are the same person but present themselves in very different ways”. 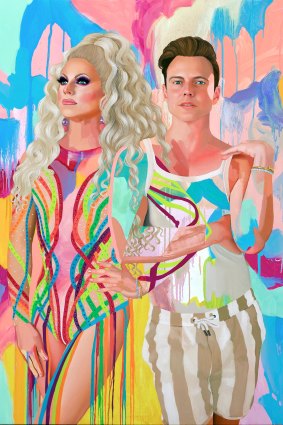 Courtney and Shane can be seen alongside the other finalists and winners in the touring exhibition. The strange thing about the Archibald is that you are familiar with the works before even setting foot in the gallery, which makes the experience of seeing them in person more impactful, and in some ways uncanny, as assumptions you didn’t know you’d made are challenged.

“A photograph can only capture so much detail,” Leutwyler says. They point to how colours can be subtly changed and also how the scale of certain works can be lost. Blak Douglas’ winning entry, Moby Dickens, is enormous – its intensity and power can’t be fully captured on a small scale. Portraits that look like they would take up a full wall turn out to be no bigger than a photograph.

“Natasha Bieniek’s beautiful portrait [of Patricia Piccinini], for example, is completely realistically rendered,” Leutwyler says. “But you would assume that it’s quite a large painting, when in fact, you could hold it in the palm of your hand. It really changes the way that you interact with the work.” 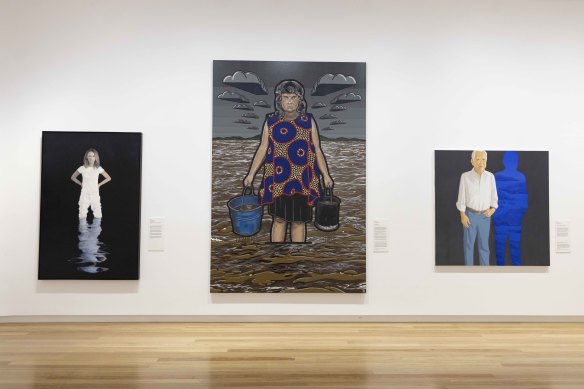 There are details in every portrait that can only be experienced in person. There’s the texture of pages torn out of a book and embedded into paint; the impact of glass used as a canvas, the way that shadows move across and through the image. Felix von Dallwitz’s portrait of Dylan Alcott, where the tennis star’s shirt blends seamlessly into the backdrop, changes depending on how the light hits the canvas.

In Courtney and Shane “if you look closely, you can see that it’s a bit nonsensical the way that the two figures overlap”, Leutwyler says. “You’ve got hair peeking through where there should be skin, and you’ve got the two body outlines intersecting in a really interesting way.”

It’s not revolutionary to say that art is different when experienced in person, but for an award as prestigious and well known as the Archibald Prize, the hidden details make all the difference.