In line with US Air Force protocols, the longed-for Top Gun sequel is coy about the identity of the hostile nation being targeted by Tom Cruise and his fighter pilot pals during the film’s spectacularly choreographed aerial climax.

That hasn’t stopped aviation buffs speculating. On the evidence of the snowy landscape and the brand of military hardware on display, they favour Iran, but it hardly matters. The triumphalism powering those bone-rattling engines still comes through loudly and clearly enough to send you cross-eyed and set your cinema seat vibrating. 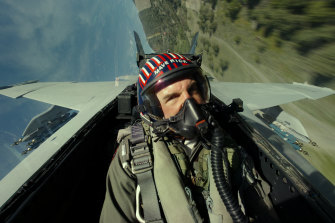 The only change is in Cruise himself. His teeth may be as white as ever and the writers haven’t forgotten to include the obligatory scene that has him sprinting for his life as if to prove yet again that short legs, too, can break speed records. But the smile doesn’t radiate quite the degree of self-satisfaction and the look-at-me-air is blurred by a faint trace of doubt.

It’s not maturity exactly. In the opening scene, Cruise’s Captain Pete “Maverick” Mitchell disobeys orders and takes off on a test flight that ends in a mess, punching a large hole in the air force budget, but the passing years have imprinted a certain ruefulness behind the bravado. Drone technology has arrived and time is running out. An unimpressed rear admiral, played by Ed Harris, who looks as if age has pared him to the bone, does not waste words: “The future is coming,” he tells Maverick, “and you’re not in it.” 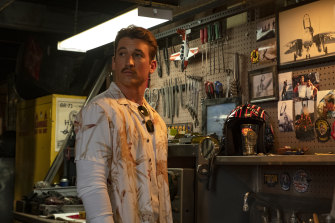 Miles Teller as Rooster, son of Goose – and inheritor of his fashion sense.Credit:Paramount

But the service still has one last job for him. He’s being sent back to his old training school to prepare an elite group of young test pilots to undertake the near-impossible. They are to destroy an enemy’s unsanctioned nuclear plant deep in a valley surrounded by mountain peaks. And Maverick has to absorb yet another punishing blow to his ego – he won’t be flying with his charges. He’s been ordered to teach, not lead.

Once again, egos feature prominently in the film’s storyline, which centres on the edgy relationship between teamwork and competitiveness. In the original, Maverick was preoccupied by his rivalry with Van Kilmer’s “Iceman” Kazansky, whose cockiness matched his own.

Then guilt over the death of his closest friend, “Goose” Bradshaw went to work, commonsense made a belated appearance and he and Iceman teamed up to become mutually admiring allies. Kilmer has a cameo role in this film. Iceman is now commander of the Pacific fleet but time has taken its toll and he’s plagued by ill-health, as Kilmer himself has been.

Yet he remains Maverick’s supporter in his regular tussles with a gimlet-eyed Jon Hamm as the training school’s director, “Cyclone” Simpson. And to further complicate the assignment, Goose’s son (Miles Teller) is one of Maverick’s students.

Film critic Pauline Kael famously described the original film as “a shiny homoerotic commercial” full of locker room scenes with half-dressed young men strutting around “as if narcissism was what being a warrior was all about”. This time, one of the young pilots is a woman and locker room scenes are not part of the package.

There’s just one nostalgic tribute to the male body beautiful – a beach football scene shot in a golden afternoon light and, with uncharacteristic modesty, Cruise retires at half-time to put a sweater on and sit on the sidelines. But Kael’s comment about the film’s resemblance to a commercial still holds good. Cruise’s love interest is played by the elegantly rangy Jennifer Connelly who looks as if she’s just come from a Ralph Lauren shoot.

The dialogue is as cheesy as ever and in an effort to add heft to every word, it comes with a preponderance of long looks and meaningful pauses, as if the whole cast is straining to contain the energy to be released during the aerial combat scenes. If the film had a heart, this is where it would reside – in the jets’ intricately calculated manoeuvres as they carve their way across the skies. It’s war stripped down to pure kinetics and in the end, there’s something very sinister in the fact the enemy never show their faces, for the human cost is never counted.