Controversial federal MP Craig Kelly will restart his Facebook campaign to promote unproven treatments for COVID-19 in a challenge to government policy after he quit the Liberal Party.

Mr Kelly plans to resume his posts despite warnings from the Australian Medical Association and others about his advocacy, declaring he was unshackled in his new position as an independent MP. 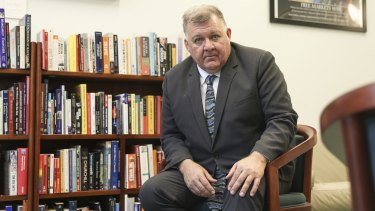 Craig Kelly’s defection has cost the government its working majority, in a time of crisis.Credit:Alex Ellinghausen

In an interview on his sudden move to the crossbench, Mr Kelly refused to accept AMA and other warnings about his claims that two drugs, ivermectin and hydroxychloroquine, can be used to treat the coronavirus.

“My whole argument on these treatments has been on the grounds that they have been denied to Australians,” he said. “I’m saying your doctor should have the right for you to sit down with your doctor and decide.”

However, he said he was not at odds with government policy on persuading Australians to take the Pfizer and AstraZeneca vaccines as soon as they could.

“I want to make sure there’s no doubt: I’m not an anti-vaxxer,” he said. “Vaccination should be used in concert with other treatments.”

Australian immunologist Robert Clancy, Emeritus Professor of the University of Newcastle, has said Mr Kelly has an “absolute right” on hydroxychloroquine and ivermectin, but others have disputed his claims.

Commonwealth Chief Medical Officer Paul Kelly said last month there was “no evidence” to show hydroxychloroquine or ivermectin should be rolled out to Australians.

The Royal Australian College of General Practitioners rebuked Mr Kelly for appearing in an interview with celebrity chef Pete Evans, while AMA president Omar Khorshid said it was disappointing to see “crackpot” ideas spread by people who should know better.

Mr Kelly refused to sack his long-time adviser, Frank Zumbo, despite reports by Guardian Australia and The Daily Telegraph about a civil order made against him involving a young woman.

“I’ve seen nothing that he has done incorrectly that would raise it to the level where I would have to throw him under a bus right now,” Mr Kelly said. “If he is charged with an offence, if he is found guilty of something, that is completely different.”

“At the moment, there are no charges against him. Yeah, it would be politically expedient of me to deny him natural justice and to throw away the presumption of innocence. But if you did that to a staff member, you’d possibly be up for unfair dismissal.”

Mr Kelly did not threaten the government’s ability to pass bills on the floor of Parliament but said he would vote with his conscience on anything Prime Minister Scott Morrison had not taken to voters at the last election.

“I don’t see my decision affecting the vote on the floor of parliament at all,” he said. “I’ll obviously continue to support the government on supply and confidence and everything that we took to the election campaign as a policy – I believe I have a contract to vote for that.”

“With new policies that come along, I’ll be voting on my conscience. But the chances of me going and sitting next to the Labor people and against the government, there’s probably as much chance of that is chewing my arm off.”

Mr Kelly said he would take the same approach on votes such as tactical moves where Labor might try to take the government by surprise.

“On procedural issues, always with the government,” he said.

Mr Kelly played down the prospect of joining the Nationals even though he often agreed on climate change issues with former Nationals leader Barnaby Joyce.

“Barnaby’s a good mate but I think Hughes is not really a Nats seat and I’m not sure how I’d look with a pair of RM Williams and an Akubra walking around the suburbs of Sutherland,” he said.

Asked whether he would join One Nation, he praised party leader Pauline Hanson and said he had not thought about joining any other parties.

“I see myself for the rest of this term sitting as an independent Liberal, if there is such a thing. I certainly don’t intend to walk away. If I can fight as an independent liberal, to keep the Liberal bastards honest, that’s probably the direction I will head.”

While he and his wife sold their Illawong house home for $1.65 million last weekend, Mr Kelly said he intended to relocate to a new home in the electorate of Hughes in southern Sydney.

“We have a 24 year old son with Down syndrome and autism,” he said. “He doesn’t have any language. And his entire life is in his backyard. So I want him to have the opportunity to have a much bigger sort of rural setting, where my wife is close to her support networks.”