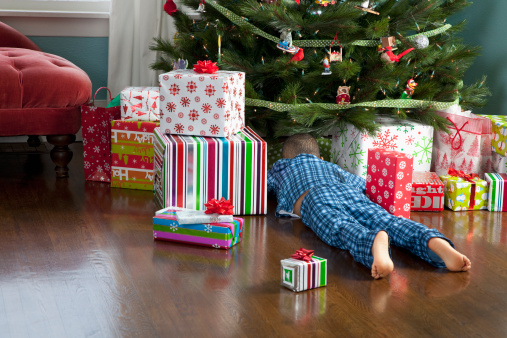 Christmas is coming, and the goose may be getting fat, but most of our pockets are considerably less plump than they were this time last year.

The cost of living crisis means that many of us are planning to cut down on Christmas gifts this year, while turkeys may be tinier and tinsel less plentiful too.

But with children still expecting a magical Christmas, how can families avoid their disappointment when faced with a slimmed-down version of the festive season?

It’s all in the preparation, experts say.

Recent surveys on consumer spending suggest that most of us are cutting our Christmas budgets. GoCompare Money says the average family will spend 14 per cent less, with one in five feeling that this season will be very difficult financially, and 34 per cent worried about even keeping the home warm over the Christmas season.

Nearly one in ten of us will be spending money we haven’t got on Christmas festivities, with many putting the cost of food and fun on to credit cards. ‘Christmas can be a lovely time of the year, but it also comes with a lot of pressure for some,’ says Matt Sanders, personal finance expert at from GoCompare Money.

‘It’s really worrying to see how many people seem to be anxious about money and may struggle to make ends meet. It’s also concerning that a significant number of people will be using a credit card to pay for some or all of their Christmas costs.’

Meanwhile figures from toy site Wicked Uncle show that many of us are planning to spend less on our children specifically. Almost a third of parents say they have made their budget for gifts slightly smaller, with 27 per cent saying their gift-buying budget was ‘significantly reduced’.

Smaller Christmas budgets may mean that many children are disappointed on Christmas Day if a favourite gift is not under the tree. The solution is to prepare them in advance, says parenting coach Jo Mitchelhill, who runs Parenting For Change.

‘I would always explain to children that there are limits on the amount and types of presents that they can expect for Christmas and just because it is on the list, doesn’t mean that it will appear under the tree,’ she says.

‘It is important to manage their expectations so that you aren’t putting yourself in financial difficulties to buy the presents.’

For those children who are still young, she says it is still important to be clear without ruining the Christmas magic. ‘For children who may still be believers and want more expensive presents, I speak to them about Santa who has a limit on what he brings price wise. So set the limit, e.g. £20, and allow them to choose something that is within that.’

Making lists and then putting a star by the presents that the child most wants to receive can also help to mitigate disappointment in older children, says Mitchelhill. ‘Help them make choices. Show them cheaper options to what they may want.’

If children are disappointed at the prospect of a more frugal season, there are steps you can take to explain it to them. Natalie Costa, who runs parenting courses through her business Power Thoughts, says that the first step is to allow them to feel sad, rather than trying to fix the problem or minimise their emotions.

‘Mirror their emotions of sadness or disappointment by saying things like, “It’s really hard, isn’t it? Especially because you really had your heart set on it,”’ she says. ‘By being able to meet your child within their emotions, meeting them where they’re at, allows them to feel seen, heard and understood.

‘We can’t always fix the problem (as much as we’d like to), and as hard as it is, we’re also teaching them how to tolerate uncomfortable feelings too.’ She also suggests reassuring them more generally, explaining that the cost of living crisis will not prevent you from having a good Christmas.

‘Children may be hearing all sorts, such as Christmas is cancelled etc – so let them know that they’re safe,’ she explains.

Costa also suggests giving children a new role at Christmas by explaining how they can give when times are tough. ‘Explore the real meaning behind Christmas – how can we give, through our actions, time and get them to explore alternative ways to giving presents,’ she explains.

‘Focus on the impact this will have on those around them – who can they help?

‘Perhaps make vouchers sharing simple tasks they can do to help others as a form of giving their time.’ She adds that parents should also find the positives in this difficult time – they can give their children a happy Christmas without a big bill.

‘I often encourage children to share one of their happy memories of Christmas with me, and when they explore it, it rarely has to do with the gift – in fact they often forget what the gift was – but what stood out was the silly joke an uncle told, or how they laughed playing a silly game,’ she says.

‘Above all else, be gentle with yourself too. Know that you’re not failing your child if they don’t get the toy that they want.

‘What children need most is you and connecting with you. What they will remember is the love, kindness, laughter and feeling of connection they felt, and that can’t be bought with money.’

‘Help kids understand the value of what they already have’

Money-saving mum Samantha Cook is preparing for her first Christmas with two-month-old baby Artemus and is planning to start as she means to go on, with a low-spend Christmas.

‘We’ve agreed on a budget for our festive activities, and we plan to stick to it as much as possible,’ says Samantha, from Lewisham, south-east London. ‘We’ve also organised a secret Santa with friends and family to cut down on the number of presents we buy, and we will be sourcing second-hand presents for others wherever possible.

‘I’ve only been a mum for two months, but I can imagine it’s difficult for parents when it comes to Christmas shopping. You just want to give your child everything in the world, and more – but for some this may not be feasible.

‘I think there could be ways to try and help your children understand the value in what they do have, rather than focusing on what they don’t.

‘Finding pre-loved items is a great way for parents to cut their costs and reduce their Christmas waste when gifting – you could even use this as an opportunity to teach children about the importance of sharing pre-loved presents and consuming in an eco-friendly way, to help Santa, spread joy and save the planet.

‘I want to make sure that we instil strong values in my child about living sustainably, not over-consuming and not creating lots of waste. This way, when he’s older, he won’t be wanting for lots of new things every Christmas but will be able to find joy in other things and feel grateful for what he has got.’