One of the most important shows of our time is The View. The ladies of the show currently consists of Whoopi Goldberg, Joy Behar, Sunny Hostin, and Meghan McCain. Every day the commentators go live and discuss the latest “Hot Topics” in politics and pop culture. Since the coronavirus pandemic, the ABC talk show has had to shift how they broadcast the program. 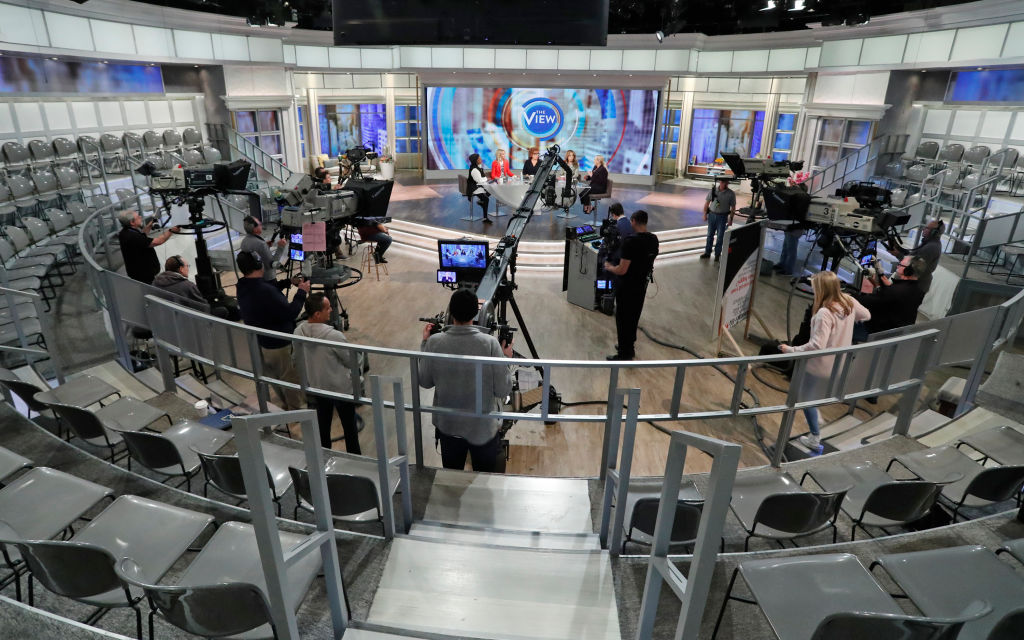 All four co-hosts have been zapping in remotely from their homes to make the show come alive. Producers had to scramble as they figured out the best way to continue doing the show live but remotely.

“I mean, each of the steps that have happened I have been thinking if you’d asked me three months ago, I would’ve thought were impossible without a [live studio] audience. It turns out we can,” executive producer Brian Teta told CNN. “Joy might’ve been the first talk show host to step away from the studio itself, that was big. It took us a little while to figure out how to get her set up at home and then next was not having an audience, which The View has had for 23 years.”

For the first time in @TheViewABC history, this week the co-hosts officially talked #HotTopics from home. A behind the scenes view of our studio from our executive producer Brian Teta.

How do the ladies communicate with each other?

It’s one thing down a show in the studio where all the ladies sit down and face each other, but it’s completely different when they’re in their respective homes. Teta said that in the beginning the ladies were not able to see each other.

“They could only hear (each other) until now,” Teta revealed. “They really haven’t missed a beat. And the ladies really just have blown everybody away, because they’re able to roll with this and do a version of the show that is very familiar in this very unfamiliar circumstance.”

"You have just stumbled upon the wildest women on television right now!" #HotTopics — the work-from-home edition!

Now that each of the co-hosts have monitors at home, they are able to flow into their heated debates with ease. Teta explained that when they only had audio, it was harder for each to know what was up next.

“We’ve tried lots of different things. At one point we were doing hand signals, commercial breaks where you know, Joy would tug on her ear like Carol Burnett and I would tell Whoopi Joy’s trying to get in if you can go to her,” Teta added. “Now that they can all see each other, we’re not going to have that problem anymore, hopefully. So I’m so excited about that. It’s a big change.”

Two minutes before showtime and @JoyVBehar’s camera took a tumble — but her husband Steve came to the rescue! ? Who can relate?!

Still working some kinks out

Earlier this week, the ladies of The View debuted new backgrounds. Now, when viewers watch the show it makes it seem that they are in the studio as they’ve been able to block out their homes.

On the same day that the backgrounds debuted, McCain was notably missing which prompted fan speculation online. However, the conservative co-host took to Twitter to explain her absence from the daytime talk show.

Our @MeghanMcCain announced she’s pregnant — congratulations Meghan and Ben Domenech! ❤️ “My husband Ben and I have been blessed to find out I’m pregnant,” she posted on her social media today.

“I’m not on The View today because of technical difficulties with remote,” she tweeted. “I’m sorry! Was ready to go live as usual. Will hopefully be up and running tomorrow.”

As they work out all the issues, the show continues to flow and get better with each passing day.