How I clawed my way back from a breakdown after a man ‘ghosted’ me: By bestselling author FREYA NORTH, who spiralled into despair when a love affair suddenly collapsed

They make you walk to the operating theatre before your surgery, if you’re able. But as I limped along the hospital corridor, I was in a terrible state: in excruciating pain that had lasted months, and terrified of being under an anaesthetic.

It was March 2017, I was approaching my 50th birthday, and had to have back surgery — a double discectomy and laminectomy. It was only when I came round from the operation and was told the surgery had been a success that I knew it was time to heal. Not just physically — but emotionally too.

Finally, I felt ready to accept that I’d had a breakdown and needed assistance to be well again. I wanted to move on, I wanted to feel like my old self again — just an updated and better version.

On paper, I lead a charmed life. I am the best-selling author of 15 books. I live on a small Hertfordshire farm with my teenage offspring, dogs, horses, sheep and our own bluebell wood. However, I was really struggling: I felt burnt out as a writer and, behind the scenes, things had happened which had eroded my sense of self and were taking their toll. 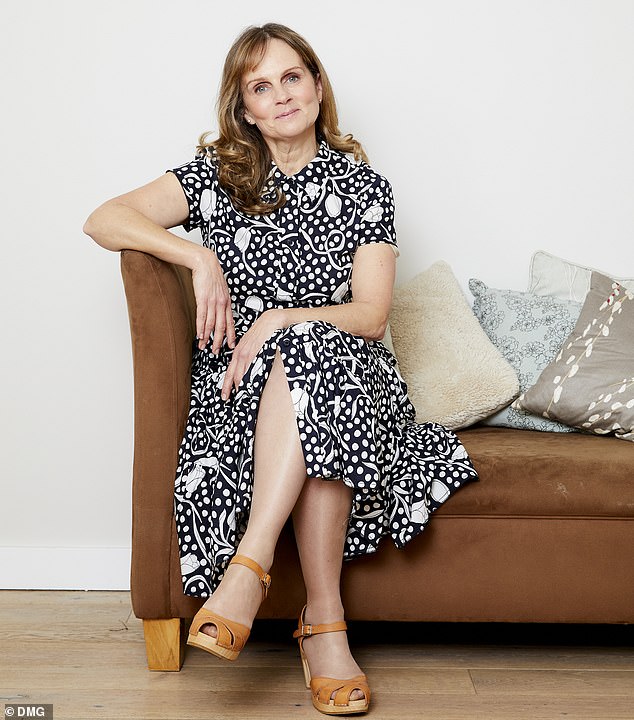 Freya North (pictured), who lives on a small Hertfordshire farm, revealed how she was able to heal emotionally after being abruptly ‘ghosted’ by a man

There was a tricky situation with cliquey women renting stables at our farm. Also, having been single for almost five years I had tumbled into an intense love affair with someone I trusted, which ended abruptly when he ghosted me overnight.

How had I gone from being at the centre of someone’s universe to being scraped off like dog mess from his shoe? Ghosting is cowardly and cruel. It denies you the conversation about what went wrong, and the chance to say goodbye to what you had.

It gave my self-confidence a huge knock. And, on top of all this — or perhaps because of it — I had writer’s block. I didn’t publish a book for five years. My career felt in jeopardy, yet writing is what puts food on our table — I’m a single parent and also the sole provider for my two children (then aged 16 and 14) and I felt very much on my own.

It was frightening and I felt ashamed, yet I didn’t want anyone to know I wasn’t coping. I didn’t want to draw attention to myself and have to talk about any of it.

I would drop the children at the school bus and hold it together until I was back home, where I would curl up and sob from the very core of me. Hours later I’d realise I had been sitting slumped in one position, just staring at the middle distance. I spent daylight hours longing for bedtime — yet couldn’t sleep. I was unable to keep my mind on anything and churned with adrenaline. Worst of all, it felt like I could only half-hear what was going on around me; I’d nod distractedly while my children talked excitedly, but I barely absorbed a word of what was being said. I wasn’t present. And when I found out I needed back surgery, it was like heavy dark curtains closing around my world.

After the operation, my physiotherapist told me precisely what to do and when, a day-by-day and step-by-step convalescence. This made sense on many levels, and as my body healed and grew stronger, it struck me I needed a roadmap for my mental wellbeing too. 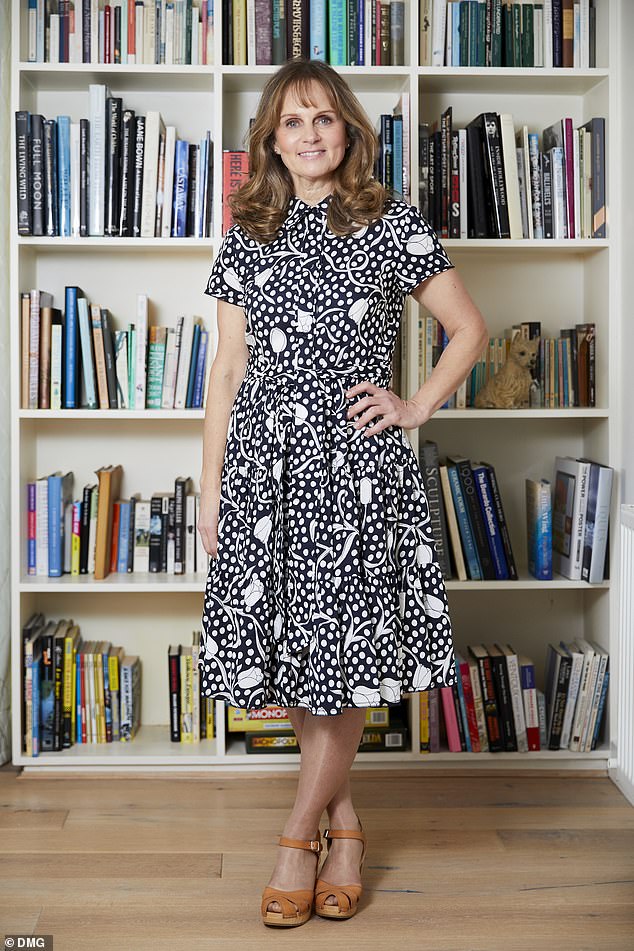 I went to my GP and was signed up for NHS counselling, and gradually, with my therapist’s help, I began to deconstruct what had happened and to sift through it. I was advised to go on anti-depressants for a while. At first I resisted because there is still a stigma about medication — did it mean I was going nuts and had to be on ‘happy pills’?

Yet, through counselling, I learned how trauma, fear, grief, anxiety — all of which I’d experienced — can cause our delicate chemical equilibrium to be out of whack and lead to depression.

Medication can help restore that balance and, after three weeks, it struck me that I no longer wept my way through great tracts of the day. I had started to feel a little more like the old me.

A few months after surgery, my consultant suggested I take up cycling. As I increased my time and distance on the bike, I found how physical exertion can have a positive effect on mood. Endorphins, the feelgood hormones released during exercise, gave me a long-lasting lift. I started to think of therapy, medication and exercise as three columns — great, tall pillars that gave me comfort and strength. But I sensed something was missing. I thought about the phrase mind, body, spirit — and realised I would also benefit from a fourth pillar: mindfulness. But it was such a broad term.

Being on the go all the time and still struggling with anxiety, I wanted to find something that could help me stop for a while, feel grounded, bring calm.

At first, meditation frustrated me: being an author with an over-active imagination, I found anything requiring visualisations irritating. I decided to try chanting instead and soon loved the resonance of repetition and the way it transported me to another plane.I joined a Buddhist group and found support and friendship. And so my four columns were in place, forming the scaffold inside which I healed, grew and found my way back to health. I came to understand how they each had a unique role, yet worked together. I also acknowledged that I, myself, had actually built these pillars because I wanted to help myself.

I came off antidepressants after two years, but wouldn’t hesitate to take them again if needed.

Now my scaffold is a strong triangular structure, and I truly love it. I have deepened my understanding of what makes me tick and what makes me crack — and what I can do about it. 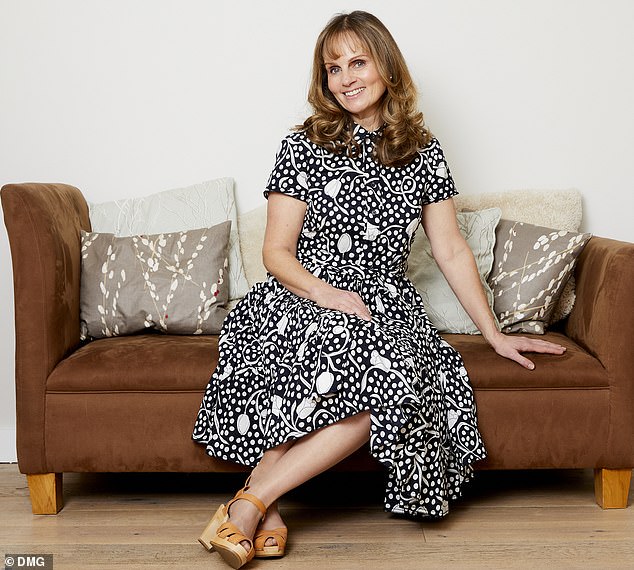 I’ve learnt to nip catastrophising in the bud. Thoughts aren’t real, they are involuntary — they’re not things that have happened — so why waste time and emotion in a fug of ‘what ifs?’. Sometimes I find it useful to actually turn my head, or even take a step to one side, to ban a destructive thought. Some people find it helpful to ping an elastic band against their wrist at such times. We can choose the thoughts we give thinking time to — we are in control of turning away from those that make us unhappy.

I still see my counsellor each fortnight and will never not be in therapy. I continue to meditate, to find time to pause and ground myself.

I learnt an easy and effective practice from the Alexander Technique — to stand behind a chair with my hands resting on it while I look out of a window and simply anchor myself for a few minutes in the beauty of the here and now.

My bike riding developed from tootling around the lanes near home to cycling coast to coast, climbing Mont Ventoux in southern France, riding from London to Bordeaux and completing the Etape Caledonia in Scotland, while raising money for good causes.

I often groan and whinge and have a good swear when the hills are hard and my legs are tired — but I always finish a ride rosy-cheeked and on a high.

These days I share my life with the loveliest man who is kind and emotionally robust. As lucky as I feel, I also know that being determined to help myself meant I was ready to embark on a relationship that is deep, fulfilling and trusting. When you do the work, you reap the rewards.

Far from feeling embarrassed about how low I was and the steps I have taken to ensure my mental wellbeing, I am proud — even evangelical. Being in a dark place is fundamentally frightening and so very lonely. But as soon as you whisper to yourself ‘Maybe I need help’, you’re on the path back to a fulfilling and happy life. Asking for help does not mean you’re weak — quite the opposite.

Having not been able to write for over three years, my 15th novel Little Wing flew out of me and I know it’s my best book yet.

There’s a cycling expression: mountains are all in the mind. This is so true. Sometimes I think back to the mountains that were in my mind and how, with the help of my pillars of support, I conquered the lot of them.