Healthcare workers are being told to stop inserting catheters as a default when someone enters hospital, as high rates of complications cause unnecessary stress for patients.

A new clinical care standard released on Wednesday recommends hospital staff consider the needs of an individual patient and the anxiety having a catheter inserted can cause before using the device.

There are 7.7 million catheters, also known as cannulas or drips, inserted in Australia each year. However, surveys have shown up to two in five attempts to insert a catheter fail, and up to half inserted in emergency departments remain unused.

Dr Evan Alexandrou, a senior lecturer at Western Sydney University and clinical nurse consultant at Liverpool Hospital said the rate of failure was unacceptable but some hospitals viewed catheters as a “default device”.

“If it was any other product it would probably be recalled,” he said. “We are talking millions of patients affected every year.”

Dr Alexandrou, who led a 2018 review of catheter use and helped write the standard, said insertion in an inappropriate place – such as an elbow crease instead of the forearm, where it is less likely to move – or not considering the impact medication administered could have on the veins were among the issues causing catheter failure in hospitals.

Up to a third of people in hospital, particularly older people, have non-visible veins, which also complicates insertion, he said.

The standard, developed by the Australian Commission on Safety and Quality in Health Care, calls for healthcare workers to consider alternatives to catheters, such as oral medication or a different drip, and assess the risk and need for a catheter by the patient, to increase the success of a first-time insertion. 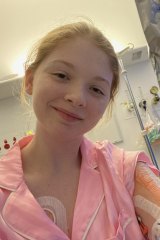 “When the patient first presents to the hospital they’ll want to do bloods, but then there is this mindset of putting in a cannula as well,” Dr Alexandrou said, adding that repeated failed insertions can damage the veins.

Ebony Callaghan, 23, has undergone seven major surgeries since her diagnosis with superior mesenteric artery syndrome, a very rare digestive disorder where the small intestine is compressed between two arteries, six years ago.

However, the south-west Sydney resident said she has experienced greater anxiety during the insertion of catheters, with staff frequently insisting they “have a go” despite her explaining previous difficulty and the need to use an ultrasound to assist.

“You’re in there to get surgery, but the thing on your mind is: ‘are they going to get a vein?’ You start to feel like a bit of a pin cushion,” she said.

Ms Kamaker said the standard was a strong tool for patient advocacy, claiming records of repeated attempts at inserting a catheter were “haphazard at best” and the issue can seem “a matter of little consequence” to emergency and ward staff.

The Australian guidelines were a world-first, Dr Alexandrou said, adding that catheter complications were a growing issue for countries with ageing populations.

“Because they’re such a common device, [clinicians] … think if they fail we just put in another one,” he said. “But we’re not at the end of that needle.”