Ey up! Who was this cheery peer beaming at us down the Zoom lens, with eyes like hooded ping pong balls, forehead shiny as a linoleum floor?

Been a while since we heard owt from ‘Uncle Eric’, as the former communities secretary used to style himself.

He shuffled out of the Commons in 2017 to park his rump on the red benches in the Upper House, where he’s since busied himself as head of the Advisory Committee on Business Appointments (Acoba).

This is the body that vets jobs offered to former ministers and civil servants.

What with this row about Whitehall Sir Humphrys simultaneously filling their boots in the private sector, Pickles now finds himself in the cockpit of the crisis.

No surprise then that the public administration committee had a few questions for him on the matter yesterday morning. 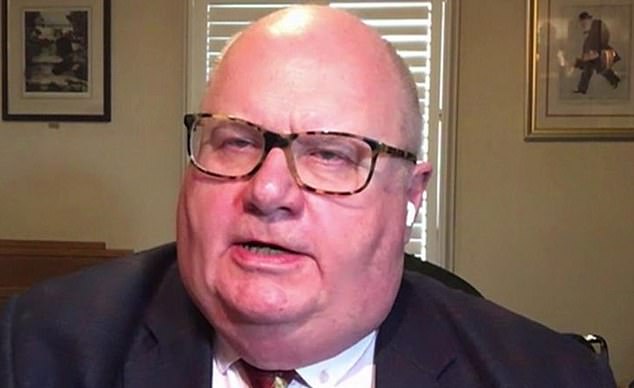 Ey up! Who was this cheery peer beaming at us down the Zoom lens, with eyes like hooded ping pong balls, forehead shiny as a linoleum floor? Why it was Eric Pickles – ex-Tory minister, government flak jacket and seasoned Westminster trencherman

Their grilling lasted a torturous two hours. Of primary concern to committee chairman William Wragg (Con, Hazel Grove) was Bill Crothers, whom it has emerged somehow remained a top mandarin while also pocketing an income from failed finance firm Greensill.

No way was Pickles taking the fall for this wreckage. ‘I’ve been in public service a long time and I’ve not come across it before,’ he drawled.

Acoba had apparently never even been consulted about Crothers’s unusual employment circumstances.

By the sounds of it, Whitehall’s shady men in suits simply decided among themselves it was all tickety-boo.

For the next 20 minutes, Pickles was quietly devastating in his neat skewering of Mr Crothers.

I say quietly as there is no gormless bluster about him, no banging of fists or rending of clothes. He’s the thinking man’s John Prescott. 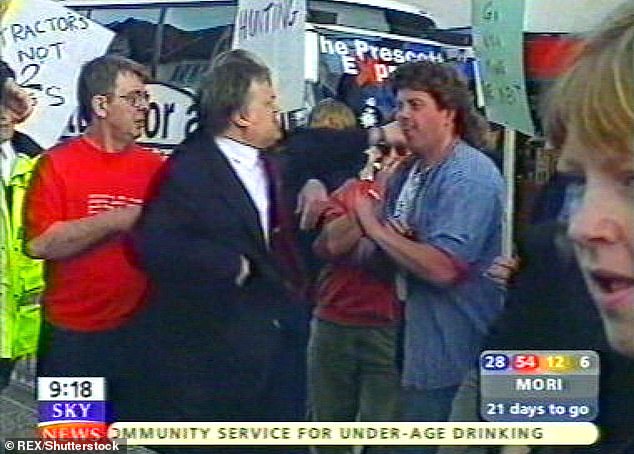 I say quietly as there is no gormless bluster about him, no banging of fists or rending of clothes. He’s the thinking man’s John Prescott. Pictured: Prescott punching a man who threw an egg at him in 2001

David Jones (Con, Clwyd W) was aghast at this idea of civil servants working in the private sector simultaneously.

Pickles admitted it was not uncommon among those lower down the batting order.

He’d worked with one junior civil servant, for example, who’d been a director of her husband’s travel company.

Mr Crothers’s case, though, was rather different beer. ‘If he’d chosen a milk round as his second job I don’t think we’d have been worried,’ he deadpanned.

Pickles claimed that from what he’d seen there ‘doesn’t seem to have been any boundaries at all’ between the civil servants and the private sector.

Google translate: they’re probably all at it.

Pickles admitted to him he’d foreseen a scandal brewing for some time. Nothing like this, though.

The former shadow chancellor responded with a long grimace and a knowing shake of the head. Capitalism. See what it does to people?

Talk eventually turned to how the system could be reformed.

We learned that Acoba’s annual budget was just north of £300,000. Less than what some MPs spend on paperclips.

Ol’ Mad Dog McDonnell wanted Acoba to be given more power to threaten rule breakers with punitive fines and, who knows, possible dismemberment.

Pickles wasn’t keen. Wisely, he seemed to think the only winners would be lawyers.

Besides, he didn’t need a huge budget. ‘I just use me noggin,’ he said matter-of-factly.

Karin Smyth (Lab, Bristol S) kept niggling away at whether Pickles thought the decline in standards was a cultural problem. She was trying to push the Tory sleaze line.

Eric shook his head and said standards in public life had simply been allowed to drift.

He pointed out that neither Labour nor the Lib Dems – nor even the Scots Nats – had any right to feel smug about this saga. ‘We are all to blame.’

He’s right of course. What a mess.