The Australian Ballet hasn’t performed at its Melbourne home, the State Theatre, for 20 months. But a couple of times since then soloist Jacqueline Clark has stood here, her hopes high – and about to be dashed.

“We’ve gotten so close, so many times,” she says. “We’ve been on this stage, we’ve looked out at the empty seats, rehearsing something. And then at the last minute another lockdown hit and we had to make the call to cancel the show. 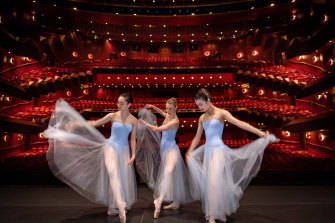 Lilly Maskery, Jacqueline Clark and Karina Arimura prepare for the Australian Ballet’s return to the State Theatre for the first time in 20 months.Credit:Eddie Jim

“So to be actually here [and] to know we’re actually going to get there this time is amazing. To finish the year back on stage with the whole company.”

Her voice drops: she almost doesn’t dare say it. As we speak, there’s still a day and a half until the Ballet opens its Celebration Gala, a last-minute, joyous addition to the year.

It is a selection of classic performances – and bittersweet glimpses at productions lost to the pandemic lockdowns over the last two years. Senior stars will present pas de deux from Serenade, Swan Lake, The Merry Widow and The Nutcracker, contemporary work includes choreography from William Forsythe and Wayne McGregor, and for the first time Melbourne gets to see New Yorker Pam Tanowitz’s new commission for the company.

“It’s been a very long time and it’s going to be an incredibly special evening,” says Clark. “Very emotional.” 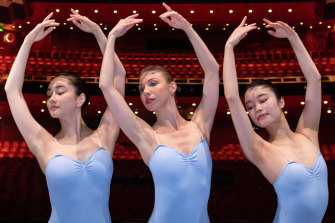 Jacqueline Clark, centre, has missed he energy and adrenaline of performance.Credit:Eddie Jim

The company hasn’t spent the time idle. Artistic director David Hallberg has held classes for all the different ranks of the company, aiming to get their skills to the next level. His anguished cry of “fingers and feet!” has echoed through the Ballet’s studios more than once.

“It was great to keep us focused and motivated,” says Clark, appreciating how lucky the company is to have the international star at the company. “He has so much knowledge that he’s able to share with us and he brings out something incredibly special. He asks a lot of you, which is great because you want to be the best artist you can be, and to have a boss that’s really pulling that out of you and pushing you to your limits is what we all want.”

“The adrenaline definitely kicks in when the curtain goes up on show night.”

The Celebration Gala runs December 9-18. But for those with a full dance card before Christmas, these will not be the last galas of the season.

The Ballet returns to Margaret Court Arena in mid-February for another Summertime gala, after the success of this year’s event, again opening with the classic Kingdom of the Shades where the corps process onto stage in perfect unison. This gala will also feature a sneak peek at one of the most anticipated new productions of 2022, the epic contemporary Kunstkamer.