Sugar and spice: Hayley Atwell and her co-stars in steamy new plantation drama The Long Song reveal the tangled romances between the slaves and their masters

After years of playing archetypal good girls and heroines on screen, it was long overdue for Hayley Atwell to bring out what she jokily calls her ‘inner rotter’.

In fact, it’s the reason she jumped at her latest screen role as the narcissistic Caroline Mortimer, mistress of a 19th-century sugar plantation and almost panto villain-like in her cruelty.

‘That was the appeal of this character for me,’ she says.

‘She was so big on the page… she’s a hysterical, grating, heinous monster.’

It won’t take viewers long to agree: in the opening scenes of the BBC’s lavish new three-part drama The Long Song we see an increasingly hysterical Caroline calling for her slave Marguerite.

The crisis? She wishes only for her slave to pull her dress on – and when she finds that a button is missing she wastes little time emphasising that if she chose to, she could have her whipped. 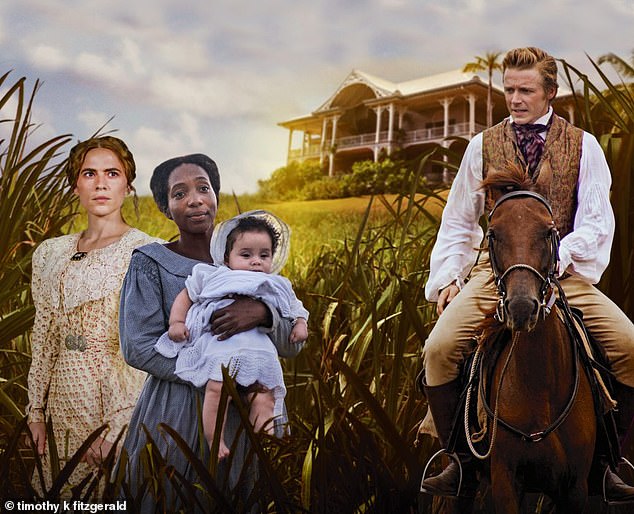 Hayley Atwell, 36, (pictured left as Caroline alongside co-stars July, her baby and Robert) reveals the liberation she felt filming her new role in BBC’s The Long Song

Not exactly a likeable sort then – but 36-year-old Hayley, whose roles have embraced everyone from swashbuckling American Superheroine Agent Peggy Carter in the Captain America franchise to the compassionate and idealistic Margaret Schlegel in Howards End, says that playing against type was all part of the fun.

‘I didn’t like her, but I loved playing her.

‘I found her dark side to be an opportunity to explore the damage done to the human psyche when you inflict damage on someone else,’ she says.

Based on Andrea Levy’s celebrated novel, The Long Song is set on a sugar-cane plantation in Jamaica in the turbulent years before – and just after – the abolition of slavery.

The story is told from the perspective of July, a headstrong young female slave on the plantation (she’s been renamed Marguerite by Caroline, who took her from her mother), as she looks back over her life.

‘The life of a white missus on a Jamaican sugar plantation is surely full of tribulation,’ she says.

‘From the scarcity of beef to the want of a fashionable hat to the almost impossible search on this small island for a suitable man to marry… but if that is the story you wish to hear then be on your way.’

What the story is, in fact, is that of a mesmerising ménage-à-trois that unfolds between July, her mistress Caroline and a charming new arrival to the island, an English abolitionist by the name of Robert Goodwin who becomes the lover of both women. 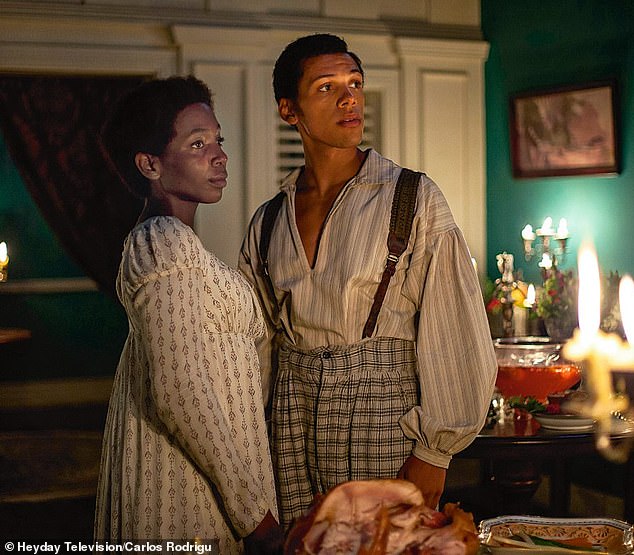 Played with charismatic vigour by Jack Lowden, who was last seen as the brattish Nikolai Rostov in the BBC adaptation of War And Peace, Goodwin is determined to bring the winds of change to the plantation, only to find his crusading zeal quickly crashing up against the complexities of life on the island.

‘He turns up at the very beginning of abolition to oversee the plantation and give the news that everything will change,’ Jack says.

‘He believes he’s morally on the right side of history and to an extent he is – but very quickly he runs into problems when he still has to run the business.’

One problem comes in the shapely form of July, played by relative newcomer Tamara Lawrance, with whom Goodwin falls madly in love, despite the gulf in their social status.

‘He marries her and has a child with her,’ Jack reveals.

‘He knows he shouldn’t be doing that, but he’s quite revolutionary in that way, and quite rebellious, so he does it anyway and figures out a way of sort of covering it up.

‘Then he begins to neglect his responsibility and I think you almost get a sense that he wished it would all go away.

‘I would say he ends up on the wrong side of history.’

Goodwin also embarks on a relationship with Caroline, who’s elated to find herself an object of desire.

‘I never thought I would feel love again,’ she utters at one point. 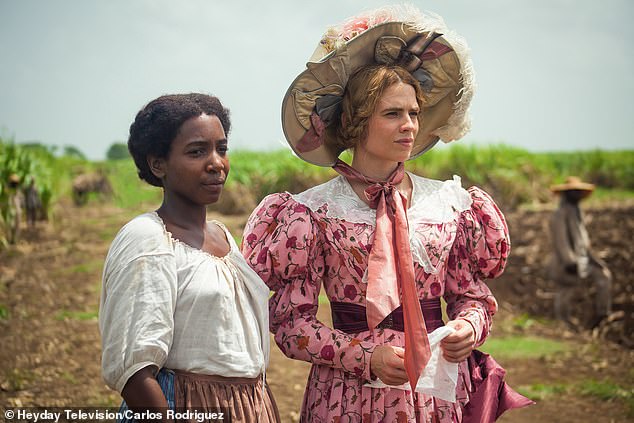 Hayley says that although her character can be an ogre, she was anxious to draw out Caroline’s human side too.

‘She doesn’t actually have any true power – she doesn’t own the land because she’s a woman, so she has nothing.

‘She’s very isolated, and because she doesn’t really have any power within herself or in her circumstances, the only way she can get a sense of power is over other people – she sees the slaves as people she can take advantage of because she herself has no status.

‘And that’s why all the slaves around her, particularly July, are much smarter than her; they can see how pathetic she is.’

A celebrated screen beauty, Hayley says she found it ‘liberating’ playing a woman whose unpleasantness manifests itself physically.

‘We got through two bottles of glycerine for fake sweat – not that we needed it because it was so hot.

‘Her personality almost has a physical manifestation, not just in how she looks but also how she behaves.

‘She’s not just hot from the heat, she’s hot because she can’t stand being in her own skin, and she’s itching all the time.

But July – the mixed-race product of the repeated rape of her mother Kitty by overseer Tam Dewar – has a self-assuredness that belies her station.

Her wiliness is established in the opening scenes. 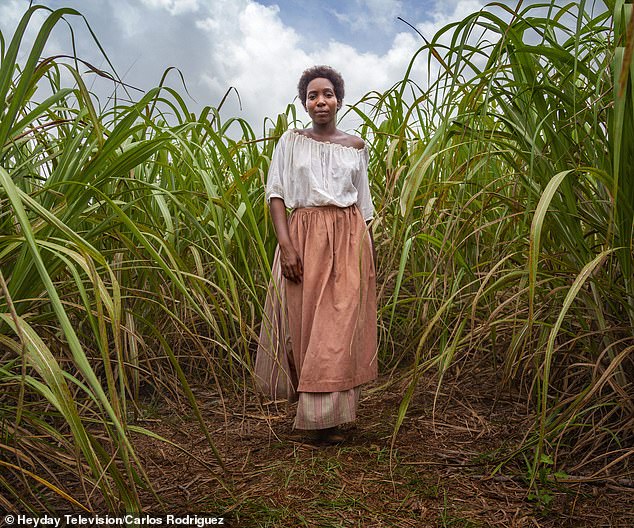 She cuts off the ‘missing’ buttons of her mistress’s dress and pockets them in her apron before, all wide-eyed innocence, blaming the washerwomen at the river.

July’s complexity and ‘ability to surmount the insurmountable’ was one of the attractions for Tamara, 24, a RADA graduate who overcame what she calls ‘incredible competition’ to win the role.

She says she undertook a vast amount of research, reading up on British colonial history before filming began.

‘There are some jobs where the material is straightforward and you get what you need from the scene – but this is a very particular story and it’s just one thread of a whole history,’ she says.

‘We hear a lot about African-American slavery with, for example, Twelve Years A Slave, and I think Britain gets to defuse a lot of responsibility.

‘But this is British colonial history – it’s Jamaica and Britain, so that’s quite a direct lineage.’

Acting alongside her in many of the ‘below stairs’ scenes is Sir Lenny Henry, whose mischievous Godfrey, as the house underlings call him, has worked for 45 years on the plantation.

Earlier this year he revealed he’d lost 3st in preparation for playing a character who doesn’t get three meals a day. 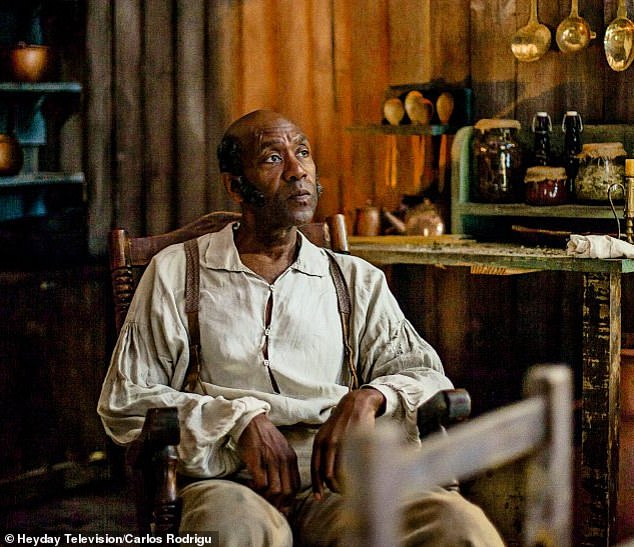 ‘I’ve been eating broccoli and not much else,’ he said. ‘And I’ve also been running a lot.’

Meanwhile the seven-week shoot in the Dominican Republic, standing in for Jamaica, was not without its challenges for the cast.

Heat aside, it was ‘pretty intense’ says Tamara, although they got a chance to explore the island and its waterfalls.

Two of the cast took the opportunity to get to know each other better ahead of taking to the stage together for a nine-week run in Shakespeare’s Measure For Measure at London’s Donmar Warehouse that has just ended – Hayley as defiant sister Isabella opposite Jack Lowden’s Viennese deputy Angelo.

‘I knew I was going to be doing Measure For Measure with Jack, and then found out coincidentally that he would also be doing The Long Song,’ says Hayley.

‘So there were moments in between takes where we’d chat a little bit about the play, and it was so nice to break the ice,’ she says.

‘He’d seen so many of my ugly sides during filming that I felt liberated.’

Ugly sides or otherwise, Hayley hopes that viewers of The Long Song will come away from the series understanding the nuances of the story.

‘None of these characters have a monopoly on suffering: just because you’re a victim or a slave doesn’t mean you’re a good person or a better person or that you have a moral superiority next to someone who’s an abuser,’ she says.

‘Human beings are far more complicated than that.’