The way the coffee drinkers of Canberra greeted Josh Frydenberg on Wednesday made it plain the Treasurer will be the government’s best asset in winning back city voters when the charm offensive gets under way for next week’s budget.

Frydenberg was in one of the safer locations for a Liberal in suburban Canberra – a city that votes overwhelmingly Labor in its three lower house seats – during a visit to DoubleShot in Deakin for a Sky News interview about the generous spending he is about to unleash. 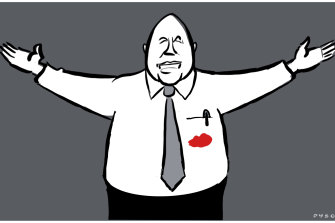 The crowd could have been in Prahran, Toorak, Mosman or Double Bay, so the Treasurer was in the natural habitat of the modern Liberal. One young woman came up to him to tell him she loved his work. Four tradies, mostly carpenters, chatted easily about nothing in particular. One man remarked later, almost with surprise, that Frydenberg seemed a good bloke.

Scott Morrison would struggle in that world right now – just when he needs to be able to campaign everywhere. The Treasurer, by contrast, has been the friendly face of an unpopular government. According to the Resolve Political Monitor, Frydenberg had a more favourable rating than any senior federal politician in months of surveys last year.

That makes Frydenberg the most useful leader to campaign with Dave Sharma in Wentworth, Trent Zimmerman in North Sydney, Gladys Liu in Chisholm and Tim Wilson in Goldstein. These are the streets Peter Dutton cannot walk down. Not easily, at least. The Defence Minister can be used in Queensland but not in Sydney or Melbourne. Morrison, meanwhile, will only be a liability for Liberals who need to hold their seats close to the city centres.

One problem, of course, is whether Frydenberg can afford to venture out of his own seat of Kooyong. He holds the seat by 5.7 per cent but his independent challenger, Monique Ryan, has a massive presence in the local community and, she claimed on Thursday, an eye-popping $950,000 in donations already. The nightmare scenario for the Liberals is to lose government and lose Frydenberg, making Dutton the heir apparent.

The election has the potential to be an astonishing victory for activists on climate, integrity and the treatment of women – the issues driving Climate 200 and others to challenge moderate Liberals while leaving conservatives like Dutton untouched. The scenario is a more conservative Liberal party room on the opposition benches with Dutton in charge, ceding the middle ground to a triumphant Albanese. It might even happen.

Which is why Morrison and Frydenberg are plotting a budget that can reset their campaign and repeat their success at the “miracle” election three years ago. The parallel is a warning to anyone who thinks the government is toast. In March 2019, like today, the government was badly behind. Labor led by 54 to 46 per cent in a Newspoll early that month. At the election, eight weeks later, the result was 48.5 to 51.5 per cent.

The surprise was not all in the accuracy of the polling. The budget also changed the debate. The tax cuts promised then, worth $158 billion in three tranches, were spread over a decade. Families were only due to receive $19.5 billion in the first four years. The trick was all in the timing. The longer the timeframe, the bigger the promise.

Morrison and Frydenberg are now constrained by global realities. With war in Europe, floods in Australia and inflation on the rise, they cannot assume a rosy outlook. There is no surplus in sight and the budget charts will show commonwealth gross debt passing $1 trillion.

The central assumption of the budget is that the rate of economic growth will outpace the interest rate on the debt, allowing debt to subside as a proportion of GDP over time. The assumption is hostage to global interest rates. There is no pledge in sight to reduce debt in absolute terms, so what if those rates increase? Just when Australia thinks it is jogging comfortably on the treadmill of global financial markets, it could be left out of breath when the machine speeds up.

Deloitte Access Economics director Chris Richardson says two big forces will add about $105 billion to federal tax revenue forecasts over the next four years. Those forces are the recovery in the economy and the soaring price of commodities such as coal, iron ore and gas. In other words, the Russian invasion of Ukraine is adding billions of dollars to the budget bottom line.

How much? Richardson thinks the impact of commodity prices to that tax revenue will be about $45 billion over four years. Remember this when Frydenberg unveils new spending. Once again, the government will use its forecasts for revenue tomorrow to make spending decisions today.

The essential yardstick in Frydenberg’s budget, and the holy grail for the Liberals, is that taxes will stay below 23.9 per cent of GDP. This was the average during the years when John Howard was prime minister and has become a self-imposed restraint on the Abbott, Turnbull and Morrison governments. It has helped deliver what many voters want: lower taxes and smaller government. But it also looks like an artificial number from an ancient era.

Why should a government judge all its fiscal decisions by a percentage from two decades ago when Australians live in a world with a global pandemic and the biggest war in Europe since World War II? The answer from Frydenberg, in an interview with me last week, was that the tax target is an article of faith. “We fundamentally believe in lower taxes,” he said.

Tax relief is a safe space for the Liberals: the one issue they can unite on, the one issue they know will rally their base, the key issue they think will sway an undecided voter. While the scale of the commodities surge will not be known until Tuesday, the increasing tax revenue from the commodities surge will take the government close to 23.9 per cent after 2025 if it does not adjust tax settings.

So do not dismiss the idea of another round of tax cuts. The government could use the low and middle income tax offset, or LAMITO, to deliver cash to households to help with the cost of living. The offset is worth between $255 and $1080, depending on income, and is due to end for about 10 million workers this year. Extending it immediately, and even increasing it, might be the way to bring grumpy voters back.

The alternative approach, to remind voters about JobKeeper and tell them to be grateful, will not turn things around for a government in this much trouble. There is no gratitude in politics. Only a dramatic policy idea, with significant funding, can match the reset the government achieved this time three years ago.

With everything against him, and even his own seat at risk, Frydenberg has every reason to be big and bold on Tuesday.