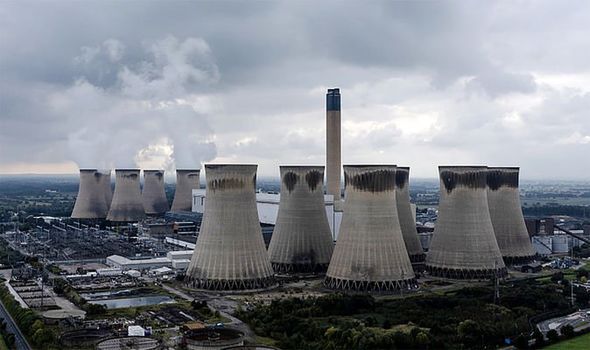 Tory MP Pauline Latham said: “At a time when energy prices are soaring due to the cost of gas rocketing globally, we should be wary of investing in fuels that fail to cut carbon and push up bills.”

Ms Latham called for biomass subsidies – which push up bills – to be scrapped.

Biomass energy is considered renewable despite burning organic matter such as wood pellets as fuel. The UK is the world’s largest consumer of them.

Drax’s Yorkshire power plant got £800million in subsidies in 2020 for pellets to generate 11 percent of the UK’s renewable power, enough for four million homes.

Many of the pellets shipped from the US arrive following 21-day crossings.

Phil MacDonald, of energy think-tank Ember, said: “Shipping wood from forests all over the world to burn in the UK is not a responsible way to tackle climate change. We need a lot more research before we ask bill-payers to stump up billions for it.”

The Government has promised £285million a year for green energy projects.

And the Daily Express Green Britain Needs You campaign calls for everyone to do their bit.

A Drax spokesman said its bioenergy with carbon capture and storage (BECCS) will save the UK £13billion in meeting its climate targets over the next decade.

He claimed leading scientists agree that BECCS will be crucial in hitting those deadlines.

He added: “Not only does it permanently remove CO2 from the atmosphere, it also generates reliable renewable power – no other technology can do this.”

BURNING biomass for electricity once looked like a cheap way to phase out coal. However, it fails to keep energy bills low, cut carbon emissions or secure our supplies.

When subsidies end in 2027, UK bill-payers will have forked out £13billion – almost £3million a day – on the fuel. And our biggest emitter is, in fact, a biomass power plant when you count the emissions from the chimneys.

Nor does it help energy security as wood pellets burnt come from North America and Europe. Otherwise we would need to sacrifice land we use for food or nature.

So what do we have to show for our vast investment? Not much.

That’s why the Government should avoid large-scale subsidies for the next generation of this fuel, bioenergy with carbon capture and storage (BECCS), when it decides its strategy this year.

The proposals rely on planting trees to absorb the carbon from wood burnt. However, forests take time and, in the short term, emissions are damaging.

One analysis found if a BECCS plant is fuelled by importing fuel from high-carbon, biodiversityrich and slow-growing forests, it could emit more than a coal power station.

And it will be expensive.

We should instead look to clean and affordable sources like offshore wind and solar.

With new nuclear, battery storage and interconnectors with partners like Norway, we can shore up our energy supply even on calm days.

They are felled in America, destroying habitats and shipped to be burnt to make what our biggest power station claims is “green electricity”.

This is aided by the fact that the carbon cost of the tree loss is accounted for in the States, not here.

But burning stuff is so last century, polluting and inefficient.

All of this is funded by subsidies. So far £4billion, with another £6billion expected in the next five years. It was £800million in 2020 alone, probably 20 per cent of all green energy support.

For that cash we could have built an enormous amount of genuine renewable energy equipment, using our own wind and sun.

Drax was recently booted out of the S&P Global Clean Energy Index due to concerns about its green credentials.

The money-men are waking up to this, it’s time our Government did too.

We should only be funding genuine green projects, not greenwashed versions of fossil-fuel burning such as Drax.