Whether you're aware of it or not, if you have car insurance, home insurance, pet insurance or medical insurance, you are likely to be paying insurance premium tax (IPT). 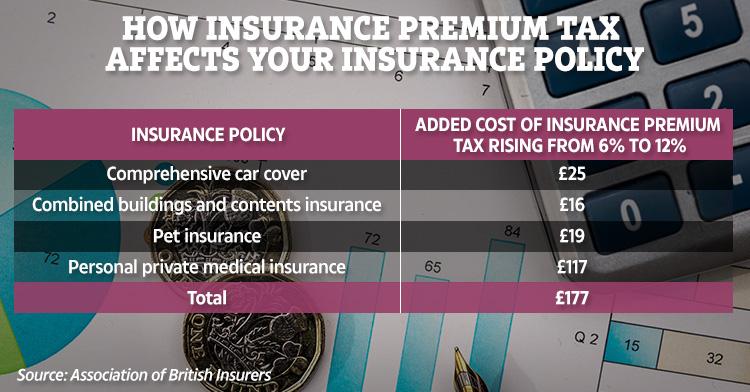 But the rate of this tax has soared from 6 per cent in November 2015 to 12 per cent now following three increases made by the Government.

This has seen households stung with extra charges of around £200 a year, according to trade body the Association of British Insurers (ABI).

Car insurance policies, for example, have increased by £25 on average, while pet insurance has risen by £19 and home insurance by £16.

Personal private medical insurance has seen the largest hike of a whopping £117.

The UK now has the sixth highest rate of IPT in Europe, according to the ABI.

Worryingly, figures from think tank the Social Market Foundation (SMF) reveal that it's those on the lowest incomes who are hardest hit.

This is because the poorest 10 per cent of households are among those who spend the largest chunk of their disposable income on insurance to begin with.

The ABI is now urging Chancellor Philip Hammond not to up the tax again in this month's Budget – calling it a "raid on the responsible".

How to save on car insurance

Huw Evans, director general of the ABI, said: “The Chancellor has a difficult task ahead of him this Budget but he should realise a raid on the responsible is the wrong way to balance the books.

People buy insurance because it is a legal requirement or because they are wisely protecting their homes, businesses, families and health.

"Punishing these people with another tax rise would be inexcusable.”

Find out why the simple trick that should cut your car insurance could be PUSHING UP your bills.

We also explain how to lower your car insurance premiums and get cashback.

Five ways to cut down your rising home insurance bills.