A leading producer says commercial TV networks should be allowed to move their Australian drama, children’s and documentary content to their streaming or catch-up services, leaving their main channels for reality, entertainment, sports and news programming.

“Australians want to watch drama, and they want to watch Australian drama,” says Chris Oliver-Taylor, Asia-Pacific chief executive officer of Fremantle, one of the biggest local producers of both scripted and unscripted content. “But you need to go where the audiences are going." 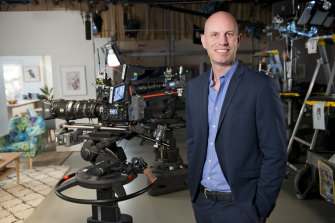 Fremantle Media Australia chief executive Chris Oliver-Taylor on the set of Neighbours. Without regulation in the form of content quotas, he says, the show would almost certainly disappear. Credit:Fremantle

“There should be some incentives and structure around, say, Netflix and Seven working together, Nine and Stan, Ten and CBS, to make sure they can put their drama offerings on the right platform at the right time, and the free-to-air model can be designed around sport, reality and news.”

The comments mark a significant intervention by the respected industry figure in the debate around the future of the industry as the federal government considers its response to the Options Paper prepared by Screen Australia and the ACMA and released in April. Allowing the broadcasters to acquit their obligations in drama, children's and documentary off their main channels would be a major concession from the production side of the industry.

Mr Oliver-Taylor's comments came as industry group Screen Producers Australia released an analysis of the response to the Options Paper by Free TV, the lobby group that represents Seven, Ten and Nine (the owner of this masthead and of streaming operator Stan), which showed their proposal would have a devastating impact on local production.

As a compromise fallback position, Free TV advocated a modified sub-quota system, in which long-running and relatively low-cost dramas such as Neighbours, which Fremantle produces, and Home & Away would be worth more points, thereby reducing the need to commission shorter-run, higher-cost productions.

Foxtel and the streamers have also indicated their preference for a deregulated, or self-regulated, market.

Were the government to endorse full deregulation, Mr Oliver-Taylor says, the results for Australian screen stories would be catastrophic.

"I think we'll look back in five or seven years if there's no regulation, and we'll find it's gone," said Mr Oliver-Taylor.

"If there's nothing to incentivise people, or a stick-and-carrot model to create Australian stories in drama, docs and kids, they just won't do it. They'll find the most cost-effective way to generate an audience."

He argues quotas should be extended to the streamers, but traditional broadcasters should be permitted “to acquit their obligations in a much-more audience-focused way” as they increasingly opt to watch ad-free drama at the time of their choosing.

“I don’t want to be naively arguing that you’ve got to keep putting drama on at 8.45 on a Sunday night. The world has moved beyond that. If you’ve got SVOD or BVOD outlets or partnerships with a streamer, I think there should be a way to acquit your drama obligations in a way that suits the audience.”

But if deregulation would destroy local drama, the SPA analysis released on Wednesday suggests even the compromise proposal put forward by Free TV would have a devastating impact.

The hours of adult drama on commercial TV would be reduced by one-third (down by 141 hours a year), while budgets would be cut by more than half (a result of tipping the scales in favour of those lower-cost shows). SPA claims 4600 jobs would be lost.

But Nine CEO Hugh Marks was scathing of SPA's analysis.

"I am constantly amazed by SPA … failing to see the future of how their membership should be repositioning their business for where the content world of the future is," he said.

"Finding a flexible approach to make sure the industry can move to that world is what it is all about. You have to change and you need to move to where audience and consumption patterns are going."

Public submissions in response to the The Options Paper closed in July. The federal government has yet to issue its own response.