Former federal MP Gladys Liu has confirmed she has nominated for Liberal Party preselection to contest a Victorian upper house seat, saying she had “fire in my belly” after losing her ultra-marginal seat of Chisholm last month.

Liu said the state opposition needed an experienced team to take on Daniel Andrews and the Labor Party at the November election, and announced she had nominated to represent the Liberal Party in the North-East Metropolitan Region. 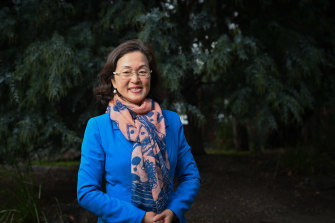 Gladys Liu says she still has fire in her belly. Credit:Eddie Jim

“My political career was terminated prematurely due to a massive national swing against the Liberals and the fact that my seat was heavily and unfairly targeted,” Liu said in a statement to The Age.

“I believe I still have a lot to offer. I started as a state candidate in this upper house region and progressed to have a career as an adviser to the then-premiers Ted Baillieu and Denis Napthine. I am now coming back with a lot more experience under my belt.”

Chisholm was one of the most marginal electorates heading into the 2022 federal election campaign, after Liu won the seat on a 0.57 per cent margin.

Labor mounted a campaign in the eastern suburbs electorate, centred around Box Hill, and comfortably won. Labor’s Carina Garland now holds the seat on a 6.32 per cent margin.

Twelve candidates ran in the seat, more than any electorate in Australia. Liberal leader Scott Morrison and Labor leader Anthony Albanese visited the seat multiple times over the course of the six-week campaign.

During one visit, Albanese announced federal Labor would commit $2.2 billion for the Andrews government’s signature Suburban Rail Loop project which will run through Box Hill.

“Corrupt, bankrupt and out of touch can sum up pretty well what the current Andrews government is,” Liu said.

“I have been on the ground listening to people day-in and day-out for the last four years. The arrogance of the Andrews government is obvious to even Labor supporters. People have been telling me Dan Andrews is all about himself and he has absolutely taken all Victorians for granted.

“Matthew Guy is desperate to form a competitive team leading up to the November election. With a low number of lower house MPs (many of them have margins less than 4 per cent) to start with, and a number of long-serving upper house members either left the party or announced retirement recently, Victorian Liberals would need candidates who have experience and are campaign ready.”

Bruce Atkinson, the long-serving Liberal MP for Eastern Metropolitan (which has been renamed as North-East Metropolitan), announced his retirement from politics last week and said he wanted an “outstanding woman” to replace him.

He is backing Ranjana Srivastava, an oncologist and Guardian columnist.

Several Liberal Party sources said Liu was unlikely to have the support of local branches, but said they did not believe there were any frontrunners in the race. Though, Srivastava was seen to have a greater chance at winning preselection because she had the support of Atkinson.

Nominations for preselections closed at noon, and the successful candidates are expected to be confirmed within the next month.