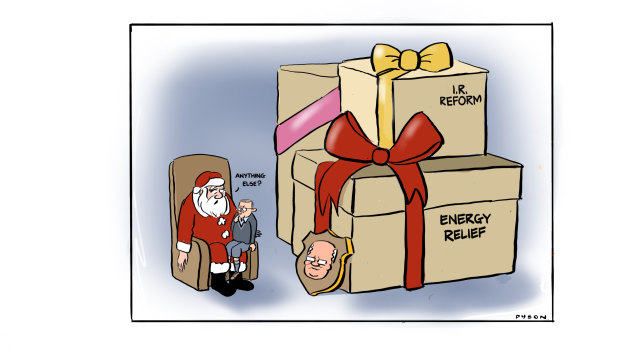 The kindergarten tantrums of the gas giants is something to behold (″⁣PM snuffs out gas giants’ blowtorch″⁣, 16/12). Had they not been so greedy then the Albanese government would not have been forced to act on a price cap. Santos, Shell, Woodside and the like have only to find a mirror to see the people to blame.
Ross Hudson, Mount Martha

The reasons behind the Coalition’s stance
There are two reasons for the rejection of the modest energy price relief bill by the Coalition. It is trying to curry the favour of the miners and gas giants as it did with its opposition to the resource super profits tax and minerals resource rent tax of Labor some 10 years ago. Labor tried to retain some of the huge profits made by the extraction of our mineral resources, however it faced well-funded opposition by the resource industry. The RSPT could not get through parliament and the MRRT was repealed by Tony Abbott.
Second, the Coalition wants the public to face higher energy costs. It can then go to the next election and say, ″⁣See, we told you. You cannot trust Labor.“
Barry Lizmore, Ocean Grove

We’ll feel relaxed after move to renewables
Is anyone else feeling relaxed and comfortable about the industry’s threat to end long-term investment in gas? Let’s just get on with the transition to renewable energy.
Gregory Hill, Brunswick

It is a socially responsible policy
The article ″⁣PM snuffs out gas giants’ blowtorch″⁣ (16/12) highlights the fact that giant energy companies have no social conscience and are only concerned with profits and lining wealthy investors’ pockets. Who could argue with the government trying to ease the burden on low to middle-income earners who face spiralling and crippling energy price rises? Shame on the energy companies and the opposition for trying to thwart this socially responsible policy.
Graeme Lechte, Brunswick West

Harness that opposition rage
The rage in parliament from the opposition against the government’s attempt to cap energy prices should be harnessed. While hardly cheap energy, it is in excess because none of it is being used to come up with viable alternatives.
Ray Peck, Hawthorn

Let’s nationalise all essential services
Santos managing director Kevin Gallagher said of gas price-capping: “This Soviet-style policy is a form of nationalisation.” I only wish all of our essential services and non-renewable resources were nationalised, whatever “style” you want to call it. That way we would be assured that private companies, many foreign-owned, didn’t overcharge us then send their maximised profits off-shore, paying little or no tax. Australian citizens have been badly served by politicians of all stripes, selling off our assets.
Margaret Callinan, Hawthorn

Happy to be hugged
I’m with you, Gary Nunn (″⁣I’m with Meghan: hugging beats a stiff upper lip″⁣, Comment, 16/12). Your dad reminds me so much of my own dear very stiff-upper-lip British dad and his reluctance to give me a hug. When I often questioned him about it, his reply was always “do we need to?” This display of affection was something he was a little embarrassed about. He’s been gone 30 years now, but I still wished we’d hugged more just like I do deeply with my own four adult children at every opportunity. Like you, migrating to Australia, where people are ″⁣happy huggers″⁣, when I was very young probably helped with that.
Nick Toovey, Beaumaris

Go their own way
I applaud the decision of Harry and Meghan to quit the stuffy archaic royal family – an anathema in the 21st century, populated by pompous, privileged, precious individuals.
Dorothy Galloway, Mentone

Complex reasons
In response to your correspondent (Letters, 16/12) – and to your headline writers – one cannot demonstrate the existence of some mysterious force called “evil” simply by asserting that it exists. The causes of the shootings in Queensland are complex and are still being investigated. They will probably turn out to be a mix of individual pathology and social influences. To assert the existence and agency of a force called “evil” has the perverse effect of absolving the perpetrators of responsibility and has as much rational basis as the conspiracy theories that appear to have been an actual influence on their behaviour.
Steve Halliwell, North Fitzroy

Surgical questions
There are plans to rein in the activities of cosmetic surgeons, starting with stopping them from calling themselves surgeons. More importantly they should be stopped from performing surgery badly – operations that should never have been undertaken, or with poor outcomes.
Then it becomes complicated. Dermatologists are not specialist surgeons, they are physicians, but some of them probably do very good surgery. Should specialist general surgeons be allowed to do surgery covered by other subspecialist disciplines?
And then we have general practitioners like me. It is a broad discipline, currently with difficulties in recruitment, and a shrinking interest in doing procedures including obstetrics, anaesthetics, and certain types of surgery, despite improved ″⁣proceduralist″⁣ training programs.
This was my life – a rural procedural general practitioner of 40 years. Have I wasted my time? Will my successors be scrubbed out from performing valuable work, by well-intentioned reformists? How much formal training is required to undertake surgery appropriately?
Skin cancer surgery has expanded enormously, and seems be done very well by some general practitioners. There are some fairly extreme views about who should do what. Without support and encouragement general practice will further contract as a discipline of clinical medicine, especially in procedural areas.
Dr Clyde Ronan, Yarrawonga

Footing the bill
Victoria has secured the formula 1 grand prix for another two years (16/12) with the ongoing cost to taxpayers of $60 million a year, South Australia claims the Saudi-backed LIV golf tournament and NSW pays $10million to buy the APL grand final. Political footy is a great sport.
Geoff Gowers, Merricks North

Effective advocate
Fiona Patten will be a loss to state parliament. In her time in the upper house she has been an effective advocate for social equity and positive change. Her collaborative and pragmatic approach to negotiation will be missed. Let’s hope she recovers her health and is able to make another tilt at rejoining the legislative arena.
Bob Malseed, Hawthorn

Intelligence gone
Fiona Patten’s defeat in the recent election is a significant loss to intelligent debate in the Victorian parliament. It is made worse by the fact that her replacement is a person with a reputation for backroom dealing and views that do not align with most people. Yes, as she notes, he may “be largely irrelevant in the 60th parliament anyway” but it is us, the taxpayers, who will be paying his generous salary and pension benefits for him to be irrelevant for the next four years.
Brian Glass, Montrose

Voice of authority
Isn’t it interesting that your correspondent (Letters, 16/12) can speak on behalf of (mostly) women in the sex industry and assume they are there against their own free will?
I understand that many sex workers are disadvantaged, but Fiona Patten was speaking as one who had been in that same industry. At least she was educated enough to give advice and support to women who make that profession their choice.
Wendy Daniels, Hawthorn

The robo-debt cruelty
Whatever the perceptions gleaned from the former prime minister’s appearance at the robo-debt royal commission, the real issue is that a conservative government sought to treat all recipients of “welfare” as being untrustworthy people.
It reflects a philosophy rampant within conservative political ranks that the state should not provide support to the socially disadvantaged, but make them fend for themselves. Shades of Margaret Thatcher’s “there is no such thing as society” culture – a sad and severe form of socio-economic Darwinism.
People are not equal in their capacity to be self-sufficient, particularly in times of economic or social stress. There will always be those who have the capacity to cope with “tough times” while many lack the ability to manage adverse circumstances. To lump them together and regard those who cannot cope as unworthy and untrustworthy is not acceptable and a sad reflection on the culture of conservative politics.
The essential question is not why the robo-debt process was so appalling, but why it was introduced.
Brian Kidd, Mount Waverley

History on repeat
The Harry and Meghan series was confronting, but not in the way I expected. Historical footage of the royal family, as well as rare film clips of their children, kept me engaged; but the sense of history repeating itself was both fascinating and chilling.
One felt the long shadow of Edward VIII’s forced abdication and subsequent ostracisation when he chose to marry Wallis Simpson. The sadness of Princess Margaret, forbidden to marry the person she loved. The hounding of Diana, Princess of Wales. The appalling, but peculiarly 21st century treatment of Meghan, through the British tabloids and social media. A common thread is these individuals wittingly or innocently, dared to question the order of things and were effectively thrown to the wolves.
I salute Harry, who served his country with 10 years in the army, and who founded the Invictus Games for returned servicemen. He has taken a public stand against misogyny and racism. He has called out internet trolls, conspiracy theorists and the defamatory statements and lies written about his wife. In an alternate universe, Meghan would have been a wonderful ambassador to the Commonwealth. As roving ambassadors for the British royal family, they could have taken a lead role in effecting change and ensuring ongoing relevance of ″⁣The Firm″⁣. Instead of which, Harry now lives with estrangement from his extended family and country.
Charlotte Chidell, Eltham North

BBL indigestion
The main problem with the BBL is no one in the real world knows where the teams come from – Heat? Renegades? Stars? – so we have no tribal allegiance. Watching it is like eating fast food every night for six weeks. Fun once, maybe twice, but we can think of other things to do.
Mick Webster, Chiltern

So a minister who couldn’t master his own portfolio goes on to become prime minister and assigns himself another five portfolios. Truth, or a plot for a political satire?
Kevan Porter, Alphington

Normally I can’t wait to mute the Morrison mouth. Not this time (“Proved wrong by history″⁣, 15/12). The schadenfreude was worth waiting for.
Jenifer Nicholls, Armadale

Scott Morrison confirmed for many of us at the robo-debt royal commission why he was our worst prime minister in living memory. Australia’s Trump.
Tony Delaney, Warrnambool

Scott Morrison has said that he wasn’t told, but doesn’t his performance at the royal commission prove that he doesn’t listen?
Helen Margaret Cole, Glen Waverley

Furthermore
We have been saying sorry to the First Australians for how many years and so, when are we going to actually repair the damage?
Bruce Dudon, Woodend

In reality the Harry and Meghan show is just a dysfunctional family airing their dirty laundry.
Mary Wise, Ringwood

It makes me wonder about the workings of our upper house electoral system when we lose such an intelligent voice as Fiona Patten.
Peter Venn, East Bentleigh

Why do we need umpires in Test cricket? Every key decision these days is made by TV review, not by standing humans.
Brian Morley, Donvale

So, the only teams to defeat Australia in the World Cup are playing off in the final. Surely that makes us No.3?
Don Hyatt, Dingley Village