The true climate impact of new onshore gas exploration and extraction has been underestimated by as much as seven times because the Victorian government excluded emissions produced when the gas is burnt.

According to a new briefing paper from policy think-tank the Australia Institute, the Andrews government's estimates do not count emissions produced when the gas is burnt for heating, cooking or other end uses. 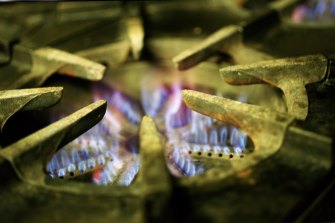 A moratorium on onshore gas exploration in Victoria will be lifted.

Last month's lifting of the longstanding moratorium on onshore exploration was welcomed by gas producers, unions and manufacturers, who had called for it to be abolished but environment groups remain fiercely opposed, arguing onshore drilling will drive up greenhouse gas emissions.

When he announced the lifting of the ban Premier Daniel Andrews pledged that any gas would first be made available to Victorian households and businesses.

Mr Andrews said Victoria was “backing the science”, referring to the government's scientific research program to assess the potential for gas extraction.

Under Australia's carbon accounting methodology, emissions are counted where the fossil fuels are burnt which, since much of our coal and gas is exported, is usually overseas.

The most recent report from this research found greenhouse gas emissions from a range of extraction scenarios would produce up to 830 petajoules of gas over 26 years, and create total emissions of 6.4 million tonnes of carbon dioxide.

The government's estimates are based only on emissions relating to exploration and extraction but if the emissions from burning this gas are also included, this figure soars to more than 46 million tonnes of carbon dioxide equivalent, the Australia Institute found, seven times greater than government estimates.

Richie Merzian, the institute's climate and energy director, questioned why carbon dioxide produced when Victorian gas was burnt does not have to be included in emissions calculations.

“The government needs to explain why the advice it used to lift the ban on more gas extraction so badly underestimated the impact this would have on the climate,” says Mr Merzian.

“Gas is not a transitional fuel in the fight against climate change, it is part of the problem.”

But while it is standard practice that carbon emissions are counted at the point where they are created rather than where they are burnt, that should not absolve governments from responsibility, says Nicholas Aberle, the campaigns manager at Environment Victoria.

Jaclyn Symes, the Minister for Resources, said the government’s approach had been scrutinised by Victoria’s lead scientist and an independent panel made up of farmers, industry, local government and the community.

“Securing local gas supply for Victorians will not come at the cost of the state’s environment, its groundwater supplies or agricultural industries," she said.

One week after Victoria announced it would abolish part of its onshore gas-drilling ban in a bid to increase supply, new modelling predicted a 35 per cent drop in production from existing gas fields within five years.

The market operator's forecast, which was made before the escalation of the coronavirus pandemic, warns shortfalls could take effect as early as 2023 and could force restricted supplies to some consumers including gas-fired power plants.

The decision to lift the moratorium will allow exploration and drilling for gas to commence from the middle of next year.