The federal government’s $226 billion Future Fund will get an 80 per cent increase in staff to deal with what it warns is a fundamentally changed investment outlook that will make it harder to make strong returns for taxpayers.

After years of clamping down on staff numbers across agencies and the entire public service, the government has given the agency – headed by former treasurer Peter Costello – the go-ahead to swell its numbers by more than 150 people over the coming 12 months. 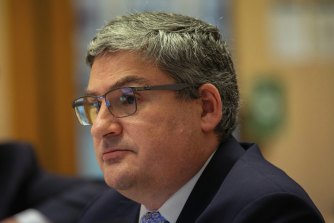 Future Fund CEO Raphael Arndt has revealed the agency is getting an 80 per cent increase in staff to deal with a “fundamentally changed” financial world.Credit:Dominic Lorrimer

The fund was created 15 years ago to cover the superannuation liabilities of the Commonwealth. Since then, it has been used to oversee other funds including the Medical Research Future Fund, the Future Drought Fund and most recently the Emergency Response Fund.

The fund has a target return of 6.1 per cent but has easily out-performed that, averaging 9.1 per cent to now have $226 billion under management.

But speaking to a Senate committee on Wednesday, the fund’s chief executive officer Raphael Arndt said the pandemic was likely to make returns much harder to achieve over coming years.

He said half of the extra 150 staff, which will take the fund’s overall staffing to 350, would be required in investment management. Between 30 and 40 more would go into data collection with Dr Arndt saying the fund needed more timely and different data than what was currently available.

Without them, the fund may struggle to meet its mandate.

“I’m certainty comfortable that we had enough staff to be successful up until last year – in other words when markets fundamentally changed because of the pandemic,” he said.

“Coming out of that experience, our job is to maximise long term performance and look forward a long time on a strategic basis.

The extra staff will come at a significant cost. The fund expects spending on staff expenses to jump by more than 11 per cent over the coming year or by $14.3 million. Over the next four years, the increase is expected to be 33 per cent or $41.1 million.

Dr Arndt said there were many risks flowing out of the pandemic that could upend financial markets in coming years.

He said the large amount of quantitative easing put in place by central banks and fiscal stimulus from governments were supporting markets and economies.

One risk could be an inflation outbreak.

“A failure to reduce the stimulus at the appropriate time could fuel a significant increase in inflation, a risk markets are already starting to focus on,” he said.

On Wednesday, the New Zealand central bank signalled it expected interest rates to start rising in the second half of next year on expectations of a lift in inflation there. The Reserve Bank of Australia has maintained interest rates here will not start increasing until at least 2023.

Finance Minister Simon Birmingham said the decision to increase the fund’s total staff numbers had not been taken lightly.

He said given the size of investments under the fund’s management, and the changed risk environment given the post-pandemic world, it was decided the increase in staff was justified.