Kate Jenkinson is wearing a long, green dress, with a few delicate gold chains around her neck. She looks ready for a night out, not a midwife ready to stay up all night.

“This is more of the garb that you would wear to give birth,” she says, laughing. “To help someone else give birth? This is possibly one of the more impractical costumes I’ve worn. But you know what? It looks good. It’s my colour. And arguably that’s more important.” 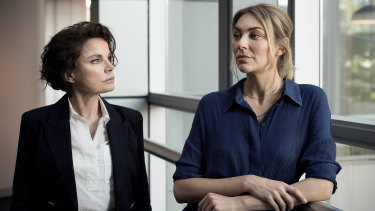 It’s set at the fictional St Bridget’s Birthing Centre in Watsons Bay, with sweeping views of Sydney Harbour wedged in at every chance, including a perfectly appointed birth room with calming dusky peach walls. The centre is spread across the disused Officers Mess and Armoury at Gap Bluff at Watsons Bay, while the main hospital building has been digitally inserted.

“The whole idea behind this birthing centre, which my character Grace set up, is that she wanted to create an environment that was a lot more holistic, less clinical, less hospital-like, so the women could have the most empowered, relaxing, joyous birthing experience possible,” says Jenkinson.

“And so for the midwives, that meant looking less clinical and looking more kind of approachable. Fortunately, for me, it means I get to wear pretty dresses.”

For the sake of comparison, my delivery suite in Sydney’s inner west looked out over a carpark.

“Not as relaxing and inspiring?” she deadpans.

Although Jenkinson has been a familiar face on screens for years – in everything from Bogan Pride, to Offspring, The Ex-PM, Doctor, Doctor and as top dog Allie Novak on Wentworth – Saving Grace is her first series lead. The show is even named after her character. No pressure, then.

“I don’t feel like any show relies on just one person,” she says. “And I don’t think any show is led by just one person. From the outside, perhaps, when people watch the show it may appear that way. But from the inside, I feel I’m one of very, very many people who are essential to this process.” 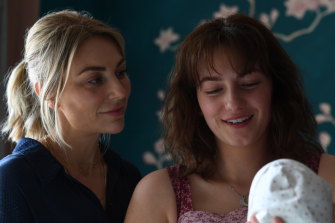 It’s a fine line in deflection – all she will admit to is waking up “slightly earlier, and more frequently than I would have on other shows” – but there is no skirting around the fact Jenkinson holds the centre of Amazing Grace. She’s incredibly likeable on screen and has the knack of making even the most over-dramatic birthing scenes look real.

To do that, Jenkinson spent a lot of time watching YouTube videos of women in labour, as hands-on research was limited due to the pandemic because the cast were unable to go into hospitals and see the real thing in action. She also had the help of the show’s consulting midwife Jess Moran, who said the trick to looking like a real midwife was keeping calm.

“You have to remain calm, no matter what the situation, even if it is an extreme situation, even if it’s life and death, you have to remain completely calm,” she says. “Because your concern, primarily, is the woman who is giving birth and then the baby second. And that, for me, is something I was always conscious of, because as a theatre nerd and an actor, you want to lean into the drama of it, but a good midwife should do the opposite.”

And the other trick? “Strong glutes. I feel like midwives spend their lives squatting, waiting for that baby to drop.”

It’s not all squidgy babies and happy endings, though. There’s trauma at the heart of Amazing Grace – stillbirth and miscarriage – topics many still find difficult to talk about. It’s the reason the Duchess of Sussex, Meghan Markle, wrote about her miscarriage in The New York Times last year, in effort to break the stigma that still surrounds mentioning it in anything other than hushed tones. 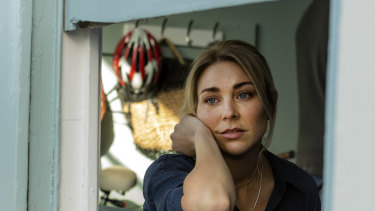 At the heart of Nine’s new drama are topics that many find difficult to talk about, such as stillbirth and miscarriage.Credit:Tony Mott

“Trauma, in general, is something that’s not really talked about,” she says. “And that’s a real shame, because it’s dangerous to deny people grief. Things are changing slightly, but I remember very much being brought up with this kind of idea that you shouldn’t indulge in sadness and if you’re going through grief, or going through a bad time, the dialogue you hear is, ‘Get over it, pull up your socks.’

“And that’s a shame because we all go through it. And it’s something we all experience and are unified by it.”

Jenkinson came to Amazing Grace after four years on Wentworth, Foxtel’s gritty reimagining of Prisoner. In it, she plays Allie Novak, a former ice-addicted prostitute who has clawed her way to top dog in a teal tracksuit in the women’s prison. The show is midway through its last season – the final episodes are due to air later this year – and so far we’ve seen Novak cut off a fellow prisoner’s finger and maybe get stabbed to death?

“Possibly,” is all she’ll give away.

The success of Wentworth, with its back-from-the-dead plotlines, screwdriver stabbings, prison fires and sieges, was not a surprise, says Jenkinson, who was a fan of the show even before she was cast.

“I’ve always thought that Wentworth has skated a really, really fine and enjoyable line between melodrama and gritty reality. And I, personally, really like that line. Because there are moments that are so outrageous, but you can lean into it because of the world that has been created.

“And I don’t think people watch television – like drama, scripted narrative television – to see regular everyday life. They tune in to see drama. And that’s why a character like Grace, the most interesting thing about her is how flawed she is. Her failures are more interesting than her successes. And I feel that about most characters.”

Now Jenkinson has ticked off the two big TV staples – medical drama and prison drama – is there anything left she’d like to do?

“I do love a half-hour punchy sitcom, and I feel like after Wentworth and now this show, which turns out to be far more tragic than I thought, I would love to do something silly and purely, purely comic.”

On that note, is it true she can tap dance?

“Oh yeah,” she says. “This is a ridiculous brag. When I was 15, I got highest score for the [dance] exam in all of WA, for my children’s gold bar tap dance exam.

“Can we just put it in writing, to all the producers and writers and directors out there, that I can tap dance? Not as well as I could when I was 15. But if anyone wants to put me in some kind of a Bob Fosse-style show, I’m your gal. I can’t sing, but we can dub over that.”