Other nations must not “backslide” but instead follow Australia’s lead on climate policy, the federal government says, following another pessimistic climate change forecast from the United Nations that is triggering calls for urgent global action on emissions reduction.

The UN’s Intergovernmental Panel on Climate Change (IPCC) latest report on Tuesday said “transformational change” was needed to reverse the trend of rising greenhouse emissions within three years to limit global temperature rise to 1.5 degrees to avoid the worst damage from global warming. 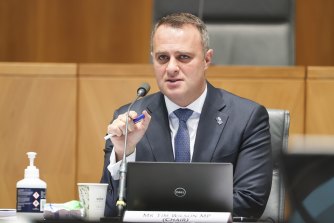 When asked if this report would prompt the federal government to increase its 2030 emissions reduction target, Assistant Energy and Emissions Reduction Minister Tim Wilson called the UK’s commitments into question and criticised China’s policy.

China has committed to hit net zero emissions by 2060. China’s President Xi Jinping has said emissions would rise to 2030 and decline to net zero over the next three decades.

Mr Wilson was referencing a comment from UK Prime Minister Boris Johnson who said, following Vladimir Putin’s invasion of Ukraine, that western nations should get “a climate change pass” to wean themselves off Russian gas supply – while retaining their emissions targets.

“We need global emissions to come down which means we need other countries to follow our leadership in making sure they take decisions they back them in.”

The federal government is committed to its Paris Agreement target to reduce emissions by at least 26 per cent by 2030, based on 2005 levels of greenhouse pollution, and hit net zero by 2050. It has pledged billions in financial support to expand fossil fuel production under a “gas fired recovery” to the COVID economic downturn.

The government views gas as a transition fuel to back up the renewables in the electricity grid as it integrates more renewables. It is aiming to commercial gas as an energy source to produce “clean hydrogen” that cuts emissions by using carbon capture and storage technology.

Mr Wilson pointed out that government projections forecast Australia’s emissions reduction will exceed its target to reach 35 per cent by 2030.

Australia’s emissions have fallen 20 per cent compared to the 2005 baseline, driven by a reduction in clearing of native vegetation by farmers – which counts towards climate action because of the carbon sequestered in the saved trees.

But Australia’s industrial emissions have continued to rise and if the changes to historical rates of land clearing were excluded, national emissions would have risen by about 7 per cent, according to analysis by Crawford School of Public Policy honorary associate professor Hugh Saddler.

The federal government’s “technology not taxes” approach to climate action is aimed at reducing the cost of low emissions technologies so that industry can transition to clean solutions without economic losses. Prime Minister Scott Morrison says Australia’s investments will contribute to global progress when they are adopted around the world.

In a significant departure from the government’s policy Labor said it would, if elected, set limits on the 215 biggest industrial polluters that cumulatively generate 28 per cent of national emissions by ramping up controls under the so-called safeguard mechanism.

Australian National University Centre for Climate Economics director Frank Jotzo said the impacts from climate change would be far worse if global warming hit 2 degrees compared to 1.5 degrees. But due to the lack of emissions reduction to date it was no longer “realistically achievable” for the world to keep warming under 1.5 degrees, Professor Jotzo said.