The repeated flood events across the Australian east coast foreshadow a future of wild weather, disruption and loss unless we act now. Without a clear plan to confront global warming and its impacts, we can expect this disruption to ramp up over time.

The current floods result from intense rainfall from a powerful east coast low-pressure system. This is situated between Australia and the North Island of New Zealand, directing moisture-laden air and heavy waves onto the NSW coast. Due to previous above-average rainfall in summer and parts of autumn, this rain is falling on moisture-laden soils and full catchments and so instead of being soaked up into the soil or filling dams it swiftly finds its way down river, flooding low-lying areas. 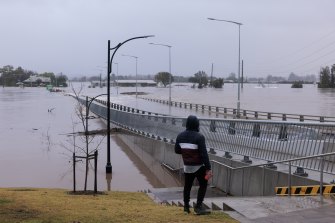 Windsor has once again been hit with severe flooding. Credit:Brook Mitchell

East coast lows are not unprecedented, with problematic seasons occurring in 2007 and 2011 for example. This current event is no different but climate change has made it more intense.

The amount of water that the air can hold increases exponentially with temperature. So, ocean warming from accumulating greenhouse gas emissions is increasing the water-holding capacity of the atmosphere above it. This general warming effect is being added to this year by a La Nina event.

Right now, we see a classic La Nina pattern in the Pacific with a large tongue of colder than average water stretching from South America to just above the eastern tip of Papua New Guinea. La Nina events pile up warm water in the western Pacific and some of that water flows down the east coast of Australia, increasing the sea surface temperatures off Queensland and NSW.

This double-whammy of warming allows the really intense dumps of rain, like those that have occurred in the past few days. And patterns of sea surface temperatures to Australia’s north and west are helping feed in moisture-laden warm air into the low-pressure system.

Most of the climate models indicate that weak La Nina conditions are likely to be with us for some months yet and, along with Indian Ocean temperature patterns conducive to rainfall, we are likely to have above-average rainfall for the coming months.

Further global warming is highly likely to further increase rainfall intensity. The global water cycle is already accelerating twice as fast as the global climate models are predicting. Climate change may also increase the strength of La Nina and El Niño events, bringing both more severe floods and droughts to eastern and northern Australia. There is no room for complacency.

Yet, even though flood heights and frequency may increase due to climate change this does not automatically mean an increase in damage and loss. That depends on whether we have people, infrastructure and other things we value in harm’s way.

We can reduce both exposure to flood and sensitivity to flood by not further developing the Hawkesbury-Nepean floodplain, by relocating existing people and structures in risky locations and by raising the levels of housing or by improving early warning systems. There are many more options suited to specific circumstances. Business as usual will be increasingly risky and costly.

Recent floods have also shown us the importance of social networks and local capacity in generating rapid responses to major floods. And increased cooperation between different levels of government is now bringing to bear more capacity in a timely way.

Lastly, taking our foot off the climate change accelerator by reducing our greenhouse gas emissions rapidly and substantially is key.

Given the instability of the climate, metrics like a 1-in-100-year flood are not so useful any more. This approach to communicating flood risk is appropriate in a stable climate but not when both the average and the variability of flood risks are changing.

Studies have shown that the flood level on average achieved once in the past every 100 years could be exceeded every 20 years or fewer with climate change. The more the climate changes, generally the more frequent those extreme floods become. And the less useful will be the old metrics and responses.

Perhaps we need to move instead to a colour coded flood awareness system similar to that of the bushfires. And link this to a well-communicated action plan for those in risky locations.

We need clear information, well-understood responses and a plan for a changing future.

Professor Mark Howden is Director of the Institute for Climate, Energy & Disaster Solutions at The Australian National University. He is also a Vice Chair of the Intergovernmental Panel on Climate Change (IPCC).