Wally Funk, 82, who was once barred from an astronaut career because she’s a woman, became the oldest person ever to travel to space on Tuesday.

Funk, who had already made history as the first female air safety investigator for the National Transportation Safety Board and the first female Federal Aviation Administration inspector, joined Amazon founder Jeff Bezos and two other passengers on the suborbital space journey. 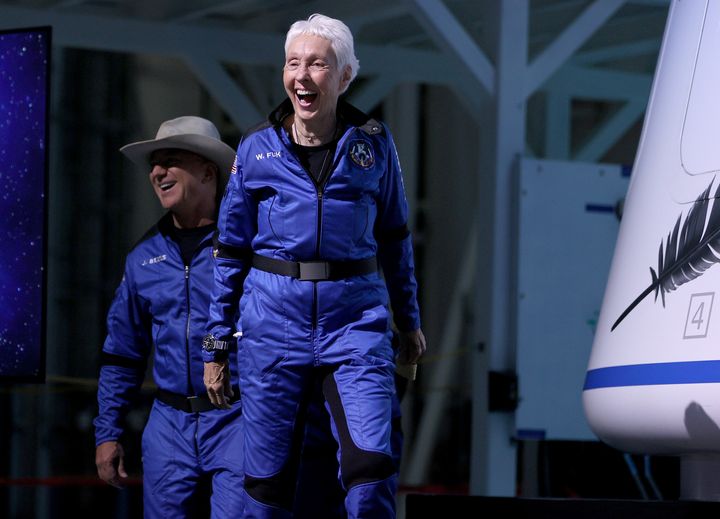 “I’ve been waiting a long time to finally get up there, and I’ve done a lot of astronaut training through the world ― Russia, America ― and I could always beat the guys on what they were doing, because I was always stronger, and I’ve always done everything on my own,” Funk said at a news conference after the New Shepard, the rocket funded by Bezos’ spaceflight company Blue Origin, completed its 11-minute journey.

Funk’s excitement was palpable Tuesday as she stood up to talk about her experience and planted a kiss on Bezos’ cheek.

Born Mary Wallace Funk, the pioneering aviator was one of 13 women who went through rigorous, sometimes grueling, testing in the 1960s to determine whether women were fit for space travel. Though she and the other women tested on par with or better than men, NASA required its astronauts to be military test pilots ― a role women were excluded from at the time.

Until Funk’s journey on Tuesday, none of those women had ever made it to space. Only she and one other woman from the program are still alive.

Funk said after the landing that she hopes this spaceflight isn’t her last.

“We had a great time. It was wonderful. I want to go again fast,” she said.

As an aviator, Funk has logged more than 19,000 flying hours and taught more than 3,000 people to fly. It’s likely, The New York Times noted﻿, that she’s spent more time in airplanes as a pilot than the three other men on board the New Shepard have spent as airplane passengers.