A mutation of the coronavirus which appears to increase infectivity is now the most common form of the virus in Australia.

International researchers found a newer strain of SARS-CoV-2, the virus which causes COVID-19, was more infectious in laboratory tests but did not make patients sicker. 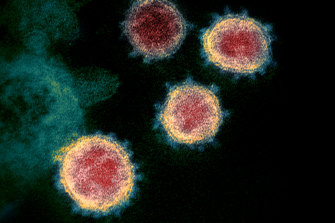 The coronavirus that causes COVID-19. Credit:AP

The mutation, known as D614G or the G-variant, is now the most prevalent form of the virus in Australia according to the Bedford lab, which pulls together global genomic data on COVID-19 through the platform Nextstrain.

University of Sydney Professor Edward Holmes – one of the world’s leading experts on the virus – said the evidence showed the mutation increased infectivity when tested on cell cultures under laboratory conditions.

But Professor Holmes – who was not involved in the research – did not believe the impact of the mutation would be as significant in the human population as it was in the laboratory.

“In nature, my guess is it also increases infectivity a bit but not massively so,” he said. 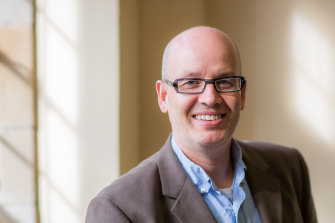 Professor Edward Holmes, of the University of Sydney, is one of the world’s leading experts on COVID-19.

“I think it will have a moderate effect, not a massive effect. There has been a lot of talk about this mutation but I don’t think it’s hugely significant.”

Professor Holmes said the G-variant was not the reason for the second wave of COVID-19 in Melbourne.

“We have got a second wave in Melbourne because the virus got out of quarantine into a big susceptible population and then it spread. The earlier mutation would have done exactly the same thing.”

Professor Holmes – who was part of the team that cracked the genetic code of the virus that causes COVID-19 – also did not believe the mutation would change the way vaccines are developed.

“This mutation is unlikely to impact the design of vaccines because it does not fall in a part of the spike protein that binds to the protective antibodies that are induced by vaccination,” he said.

In a paper published in the peer-reviewed journal Cell last month, researchers found the G-variant quickly became the dominant form of the virus around the world, suggesting it may be more transmissible than the original form from Wuhan.

“All over the world, even when local epidemics had many cases of the original form circulating, soon after the D614G variant was introduced into a region it became the prevalent form,” Bette Korber, a theoretical biologist at Los Alamos National Laboratory in New Mexico and lead author of the study, said in a press release.

The research included observations of patients from Sheffield in England with the G-variant, which showed they carried more copies of the virus but were not more severely ill.

Experiments in the laboratory also showed the G-variant was more infectious in cell culture.

“These findings suggest that the newer form of the virus may be even more readily transmitted than the original form,” Dr Korber said.

However other epidemiologists, including from the Yale School of Public Health, have said it is not yet clear whether the G-variant increases the transmissibility of the virus.

Professor William Rawlinson, a virologist with the University of NSW, said the G-variant was the predominant strain in locally acquired COVID-19 cases in Australia.

However, he said some people returning from overseas were still carrying the original strain.

Professor Rawlinson said while the laboratory tests on cell cultures indicated the G-variant grew faster, this may not translate into different outcomes in patients. “A laboratory is not the body of a person," he said.