A seascape by renowned British painter J.M.V. Turner will be auctioned by Sotheby’s on Wednesday.

The painting, which can currently be viewed at Sotheby’s London auction house, is expected to sell for between £4 million and £6 million ($5.5 million to $8.3 million.) Aside from a brief auction in New York in 1945, the painting hasn’t been displayed publicly in more than a century.

Sotheby’s declined to say who owns Purfleet and the Essex Shore as seen from Long Reach, which depicts a slew of fisherman and their boats thrashing in the waves of the Thames Estuary. 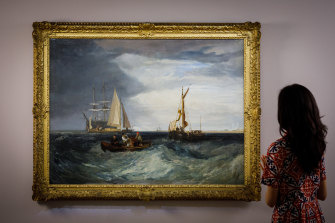 A rare seascape by J.M.W. Turner goes on view for the first time in 75 years at Sotheby’s in London. Credit:Tristan Fewings/Getty Images

It’s part of a series of work “that established Turner’s contemporary fame and reputation as the greatest seascape painter that ever lived,” said Julian Gascoigne, director of early British paintings at Sotheby’s.

“He really is the fulcrum on which Western art hinges,” Gascoigne said. He added that Turner was both inspired by and competed with older masters, while he also looked towards modernism and abstraction.

The pieces in the series, painted between 1806 and 1809 at the height of the Napoleonic wars, are all of scenes at the mouth of the Thames. The painting up for bid shows a warship also lurking in the background, positioned to defend London.

It was the subject of the sea itself and Turner’s depiction of it, however, that distinguished him.

“(Its) swirling vortex of moving waves … that’s what really was revolutionary to his contemporaries,” Gascoigne said.

The seascape canvas is on display alongside over 650 other paintings, sculptures and decorative arts in Sotheby’s multi-roomed exhibit.

Among them is a recently discovered double-sided drawing by Sir Peter Paul Rubens, the Flemish artist considered among the most influential in the Flemish Baroque tradition.

They are one of three sheets that survived from the artist’s long-lost sketchbook, which burned in a fire in a room in the Louvre in Paris in 1720, according to Gregory Rubinstein, head of master drawings at Sotheby’s.

“There were thought to be two sheets … that survived. But this has been recognised as … a third newly discovered sheet completely unknown until now,” he said.

He stressed that it is possibly the most important Rubens discovery in nearly two decades, the reinterpretations of classical sculptures giving insight into what influenced the artist.

Other pieces at the sale include still-life paintings by Jan van Kessel and Balthasar van de Ast, alongside British portraits that include a rare one of a young William IV.